Why doesn't more light bounce off of things in the manner of sound?

If I'm sitting in the den with my door slightly cracked, I can hear my wife washing dishes in the kitchen down the hall. But why can't I also 'see' images of her washing dishes if, say, I looked up on my wall?

The sounds that you hear in the kitchen have a frequency range of (say) 50 - 500 Hz, with smatterings of higher frequencies (dishes banging) into the low kHz.

Another way of looking at this: at any moment, you can consider every point of the wave front (sound, light) to be a series of point sources, all of which are in phase. As long as the dimension of openings etc. is small (comparable to the wavelength), these wave will spread out - this is diffraction. You can see a nice image at http://homepages.ius.edu/kforinas/S/pics/diffraction1.jpg 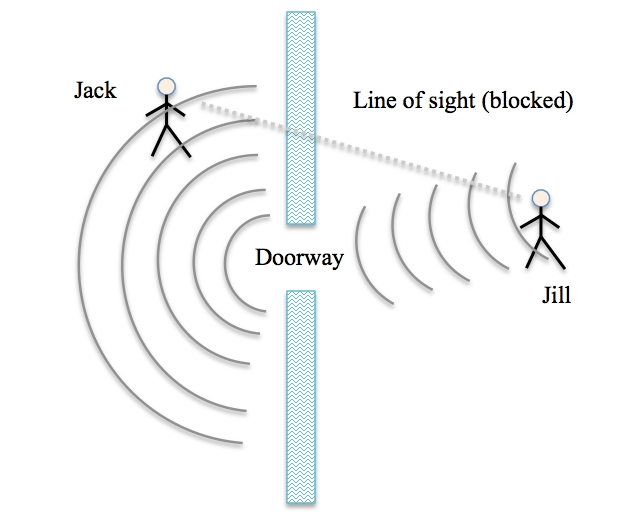 By contrast, visible light has wavelengths in the 400 - 700 nm range. Thus photons bouncing off one bit of the surface will have a random phase relationship relative to other photons. The net result is that these photons (waves) will interfere constructively in just one specific direction (like Young's diffraction experiment, they will interfere constructively when their phase difference is a multiple of $2\pi$. ) In practice this means that the photons end up scattered, losing their spatial coherence. That is a fancy way of saying "they get so scrambled that they no longer form an image".

Recognize that imaging requires that there is a 1:1 relationship between the origin of a photon (did it come from the pan, or from the wife), and the direction in which it arrives at your eye. The lens in the eye makes sure that all photons that arrived from one direction end up on the same point on your retina. As long as all these photons came from the same source, that means that source becomes a "point" in the image you see. When the directions of the photons get scrambled, all you end up seeing is an "average intensity" of the light. Think "shower door", but worse. [note the above is slightly simplified, assuming that the object you look at is at infinity. Closer up there is a very small divergence of the light reaching different parts of your eye - this requires you to "focus" with your lens. That doesn't affect the basic principle in play here.]

This is why you can tell whether the light is on in the kitchen at the end of the hall, but you can't see what is going on - unless the walls are made of mirrors (which are smooth on the scale needed for specular reflection)

As an aside - sound can also travel "through the wall"; the pressure waves will cause slight motion of the wall which in turn causes waves on the other side (although much reduced in amplitude because of the acoustic mismatch between the air and the wall; this is where the "glass against the wall" so beloved in 50's movies can help). In principle, electromagnetic waves can also travel through walls (which is why your radio works indoors) - but again, the short wavelength of light has two implications. One is, that the distance to cross is "many wavelengths" so that even a tiny extinction coefficient is sufficient to cause complete absorption; and the short wavelength means that "everything" in the wall acts as a scattering point, and the light doesn't stand a chance of making it through in measurable quantities.

Floris and Michal have already given nice explanations of why long-wavelength sounds can diffract around person-sized obstructions, while short-wavelength light can't.

A different side of your question leapt out at me, though, which is this misconception:

Why don't you can't see the light (visuals) from them?

The answer to the first question is, "Sure you can." An ordinary surface has plenty of diffuse reflection of light. To convince yourself of this, shut off the artifical lights in your house and go down the hall to that bathroom with no windows. It'll be dark in there, but not completely dark, even though sunlight may have to bounce off of a half-dozen surfaces to reach you.

It's good thing for us that we can't make images from diffusely reflected light. If we could, we would only be able to "see" the sun and light bulbs and objects that glow under their own power, and we wouldn't be able to make out our spouses and pets and books and all the other things that we see by scattered light. For comparison, imagine the difference between the sound of a musical instrument in an ordinary room and in a large, acoustically resonant room, like a church. (I say "large" to reduce the contributions from sound diffraction.) Now imagine having only an audio recording, with the resonances and reflections and echos and reverberations, and being asked to identify the shape of the room it was recorded in. It's certainly possible, but it's not the way that ordinary people process ordinary sounds. We don't make "images" of sound; we perceive that sound is being emitted and perceive its spectrum.

As DumpsterDoofus says in a comment, you can can make visual images from reflected light if the reflecting surface is sufficiently smooth ("mirrored"). But there are other circumstances where you can get some information out of diffusely reflected light, too. For instance, suppose your partner is working in your small, drab-colored laundry room and decides she needs to examine those hot-pink bedsheets from your daughter's bedroom. So she unfurls them in such a way that most of the light going from the laundry room to the hallway picks up the pink color of the sheet. If the hallway is also dark, you could be able to notice the light spilling from the laundry room change from white to pinkish. It is a question of signal to noise.

This happens because sound wave Defract (bend around corners), this only happen when the wavelength is roughly comparable in size to the gap in question. Human hearable (20Hz to 20kHz) sound waves have a wavelength on the order of a couple cm to 2 meters, which is similar to commonly encountered gaps such as a door cracked open. Heres a calculator to find it exactly.

On the other hand visible light waves have a wavelength on the order of a couple hundred nanometers - too small to diffract in a doorway. However radio wave (also electromagnetic radiation - just like visible light) have larger wavelengths and can diffract around such obstacles

Another point involves sound passing directly through walls, acting by the light analogy - like a glass pane. Why glass is transparent is explained in this Sixty Symbols video. This wall transparency to sound/light was already discused in this question

While there are issues (discussed in other answers) of sound bending around corners better than light does, due to it vastly longer wavelength, the question actually asks about reflection off surfaces. Even if one supposes a situation where indeed the sound/light signals arrive mainly by reflection rather than by refraction (and it certainly happens for sound in certain configurations, though I think not typically in an indoor situation), then it is still true that auditive perception is qualitatively pretty much the same as when there is a direct passage, while it is impossible to see any images (except is reflection is off a mirror), even though some light can be perceived.

The explanation for this is rather trivial. The way we extract information from sound is mostly by it temporal variations: a sequence of variations of pitch and amplitude. These temporal variations are rather well preserved under (diffuse) reflection of sound waves (but if there are multiple reflections, effects of reverberation do deteriorate our perception of the sound). However for visual information, especially seeing images, the information is essentially in the spatial distribution of the light: it matters a lot exactly from which direction light rays are arriving. For this reason navigating on sight in a dense fog is virtually impossible, even though the daylight does make it to our eyes. And this spatial information is completely destroyed by diffuse refraction, which is why walls don't act like mirrors.

So if your wife was trying to send a message in Morse code using a flashlight, you would be able to get that information even if the light had to reflect off surfaces to reach you.

27
How are photons "consumed"?
5
Why doesn't sound travel through walls?
7
Why can't light pass through walls but sound can?
44
Why doesn't light, which travels faster than sound, produce a sonic boom?
1
Speed of light and perception
0
Frames of reference and why are they different
35
How can wifi penetrate through walls when visible light can't?
3
Does sound bounce in all directions, or as a ray, like light?
1
Why does light not produce sound?