What does it mean to have infinite negative conformal time?

In the context of Inflationary Cosmology, it is postulated that there was a period of shrinking Hubble Sphere radius $(aH)^{-1}$.

Then the regions of the universe which appear to us to not be in causal contact can indeed have been in causal contact at some (conformal? physical? I'm not sure. My intuition would be physical) time in the past.

This solves the Horizon Problem, namely that we observe a homogenous isotropic universe to one part in 10,000, yet it doesn't seem that all regions of the universe were in casual contact to achieve such a uniformity.

Anyway, when this shrinking Hubble sphere radius $(aH)^{-1}$ is invoked, it has the result of pushing the Hot Big Bang singularity back to negative infinity conformal time.

It is this statement that I am having trouble grasping.

So for a strong energy violating fluid such that

I understand the maths behind it, and can't argue against that the initial conformal time goes to minus infitity, but I don't know how to think about that.

In a standard Hot Big Bang the singularity occurs at $\tau_i = 0$ conformal time. This seems fine to me.

And a negative scale factor would bring a whole other conceptual problem!

Namely, they are directly related by

So my questions are;

What does it mean to have negative conformal time?

And what does it mean to have negative infinity conformal time?

Conformal space is nice because in it, photons have straight world-lines, so we can easily see what we must do to achieve causal contact between two points in the CMB, after the physical time $t_i=0$ of the initial singularity, but before the physical time $t_{\text{CMB}}$ of decoupling.

then if we make causal contact between world-lines in physical time such that $\Delta t=0$ we also have $\Delta \tau=0$. So the intersection points between straight lines in conformal time tell us all we need to know about where causal contact is achieved.

However, this relation does not mean that if we have negative $\tau$ then we also have negative $t$. It tells us only the relationship between changes in physical and conformal time.

It tells us that we can have a small change in $t$ (between $t_i=0$ and $t_{\text{CMB}}$) but an infinite change in $\tau$ (between $\tau \rightarrow -\infty$ and $\tau=\tau_{\text{CMB}}$), when $a(t)$ is very small near the singularity. This turns out to be exactly what we need inflation to do, to get the world-lines of sections at opposite ends of the CMB to meet (causal connection).

Therefore in cosmology, by requiring that the Hubble sphere shrinks before the CMB is produced such that

A nice diagram with straight world-lines in conformal time (like the one below from the cosmology lectures of Daniel Baumann at DAMTP Cambridge) shows why this negative conformal time is required to achieve causal contact, and how it is an equivalent requirement to that of the shrinking Hubble sphere.

The lecture notes themselves are not available on arXiV but another set of Baumann's lecture notes on Inflation is: http://arxiv.org/abs/0907.5424. 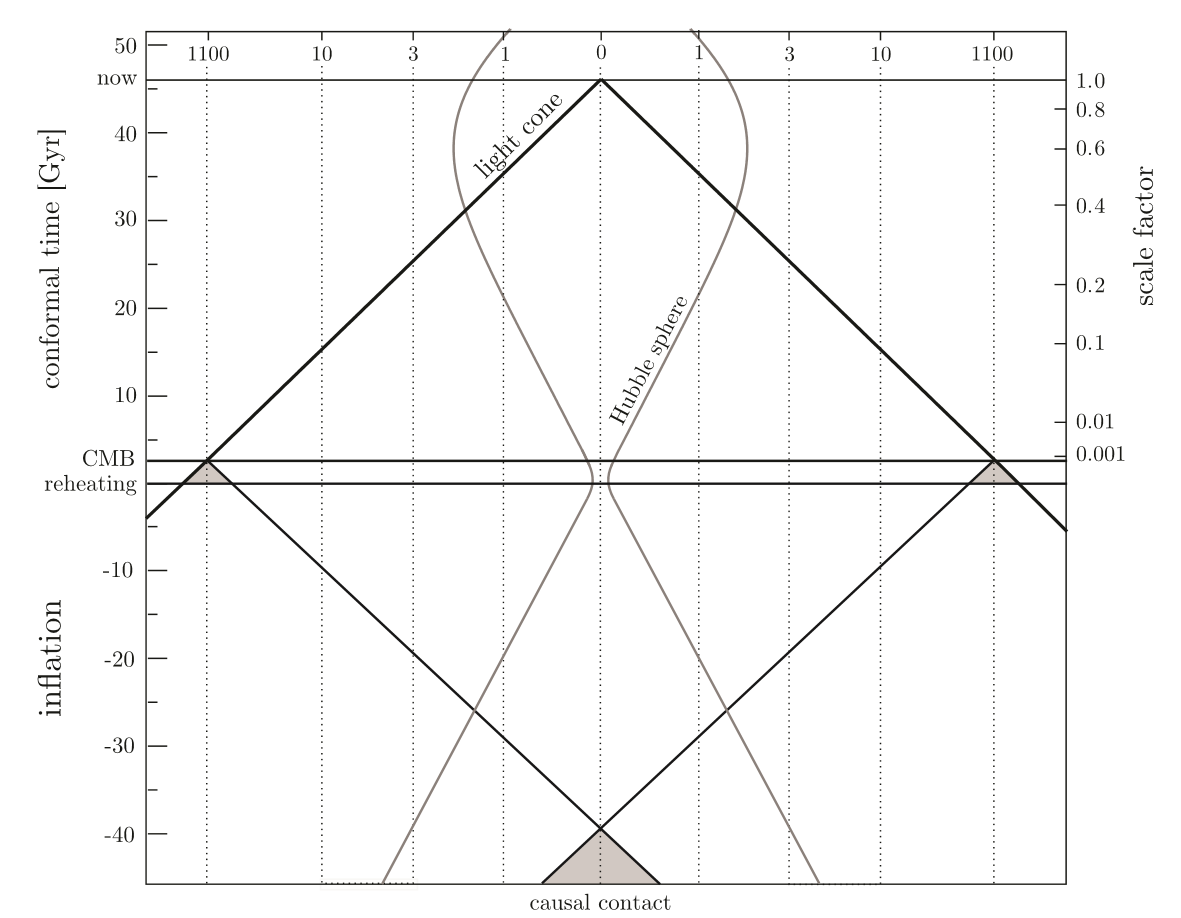 Not the answer you're looking for? Browse other questions tagged cosmology big-bang cosmological-inflation or ask your own question.

1
Relation between comoving distance and conformal time?
1
Does big bang have really any justification while we are living within a huge chaos?
1
Photon outside of Hubble sphere from perspective of comoving frame
2
Measuring the growth of the Hubble sphere
4
Is the Big Bang a naked spacelike singularity?
6
What exactly is the problem that Inflation solves?
2
Horizon problem: Angular size of the causality patches on the CMB surface