Can a particle be physically observed inside a quantum barrier?

I understand that if a particle approaches a finite potential barrier of height $V_0$ with energy $E < V_0$, there is still a finite probability of finding the particle on the other side of the barrier due to quantum tunneling.

I mean, if we can say that "there is a nonzero probability that the particle is inside the barrier", surely this would suggest we can do so?

If not, why not? Am I understanding the whole wavefunction/probability distribution thing right?

Yes you appear to "understand the whole wavefunction / probability distribution thing right", and it is possible to measure a probability of presence in the forbidden region, but this probability is usually small.

If you have been following particle physics, you will know that a proton is composed of three quarks that are never able to come out of the nucleon formation, i.e. the potential well in a quantum mechanical picture.

How do we know they exist if not by measurement inside that potential well?

The first experiments decided that there are partons inside the nucleus, because the scattering showed a hard core. Eventually these were studied in various experiments and the Standard Model of physics was established.

So you are correct in your surmises.

Edit: from thinking on the answer of Peter Morgan I will add that Xrays are an even simpler example. Even simple xrays of one's hand. The skin is a potential barrier and the xray photons wave function is scattered within, conveying information when they come out by their scattering angle and density, on the bones etc.

Yep, it is indeed possible for a measurement of the particle's position to reveal that it is inside the barrier, because the wavefunction there is nonzero - or more precisely, because the quantity

which represents the probability of the particle being measured within the barrier, is nonzero. Keep in mind that a "measurement" can be any interaction with another particle, it doesn't have to be performed by an actual measuring device. So if the particle interacts with the barrier itself, that counts. In that case you could have something like the particle tunneling partway through the barrier and possibly getting stuck in the middle (but you wouldn't see it because your measuring device can't get in there).

To be close to second year undergrad physics, consider a non-relativistic electron with energy $E$, bounded to a double well potential $V({\bf r})$ with a classically forbidden tunneling region with potential energy $V_0$ in between, i.e., $E<V_0$. (Let us assume for simplicity that the full potential profile $V({\bf r})\leq V_0$, i.e., $V_0$ is a global maximum for the profile.) 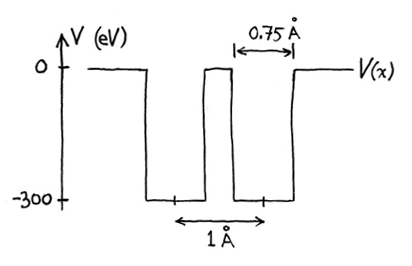 Figure 1: An example of a double well.

As I read the question, Josh Chen is not disputing that an electron prepared in one well can reappear in the other well. Instead, the question is that since the integral of the square of the wave function over the classically forbidden tunneling region

is strictly non-zero, does that actually mean experimentally that there is a non-negative probability to find the electron inside the classically forbidden tunneling region as the Born rule tells us, and how would one measure that probability, at least in principle?

Yes, the Born rule holds also in this situation. To measure the position of the electron, we will here use a photon with wave length $\lambda$ and of energy

We will assume that the energies involved

are much smaller than the rest energy $E_0$ of the electron, so we can treat the electron using non-relativistic quantum mechanics.

(Since we are not really interested in the possibility that the electron could reach the other well, let us for simplicity assume that the electron penetration depth $\delta<\Delta$ is smaller than the separation $\Delta$ of the two wells, i.e. we are effectively studying a single well.) To use the photon as a 'microscope' in order to claim that we have detected the electron inside the classically forbidden tunneling region, the 'microscope' should have a resolution better than the electron penetration depth. In other words,

On the other hand, if we had used soft photons with energy $E_{\lambda}<V_{0}-E$, the above inequalities get reversed, and the resolution will be too poor to determine whether the electron is inside or outside the classically forbidden tunneling region, cf. the uncertainty principle.

If one can observe individual events on the other side of the potential barrier from the source, but only when the source is turned on, then one might say that something must have caused the events. On the macroscopic scale, it must have been the source because it's only when the source is turned on that there are events. One might say, further, on the microscopic scale, that whatever it was that caused the events must have come through the space between the source and the apparatus in which the events happened, it can't have just jumped the gap. In this sense, we might say that detecting a particle on the other side of the barrier shows that a particle must have passed through the barrier, so this is a detection of a particle in the barrier. We know, however, that thinking in terms of something like classical particles is problematic, so that it's best not to think of there being a particle that travels from one place to another.

I liked Anna v's Answer enough to upvote it, but I point out that it is only by a specific kind of semi-classical inference that we can say that an event on the other side of the lab (which we say is caused by a scattered particle) means that there was another particle that caused the scattering. In this case, where there is a potential barrier, whatever material apparatus implements the potential barrier will get in the way of being able to do such a scattering experiment in any clean way. It would only be by subtracting the background caused by the material apparatus that we could tell that there were events that were caused by the "particles that classically couldn't be there because of the potential barrier". The significance of the potential barrier for the interpretation of the recorded events in terms of particles is that there is more background. [There's never no background to subtract, but often the background can be made small enough that we don't have to pay much attention to it. A common failing of interpretations, IMO, is to ignore the background in principle.]

Nonetheless, we can establish that a given wave function is a very effective tool for predicting just how many detection events we would record if we put a given type of detection apparatus at any given point, and if we ensure that there is very little background. Then, we can extrapolate to say what we would observe if we put that type of apparatus in a place where we in fact cannot put it. That's not "physical" in the sense that I think you mean it, but it's mathematically reasonable just up to the point that we think about actually implementing the measurement, and it lets us imagine how we would engineer new experiments in a useful way. I take this to be the basis of David Zaslavsky's Answer (which is more-or-less OK, but I did not upvote it because I think it does not enough address your question).

IMO, however, without explication here, it's good to start to think in terms of the quantum field being the intermediary when modelling an experiment, instead of particles, even when you're doing 2nd year undergraduate Physics.

Frédéric's answer is the best one. I myself was going to write something like scattering light in the forbidden region by admixtures or photo-reactions in the forbidden region. Note, to cause a photo-reaction, you have to have sufficient energy. In a quasi-stationary case the energy is $E=\hbar \omega$. So it is the same as outside the barrier. No energy conservation violation occurs. You just observe a particle in a classically forbidden region, but quantum mechanically it is not forbidden. That is why the probability is not zero.

A barrier region can be thought as just a different mean, and like Fredderic said if the wave interacts somehow with something in this mean it is a empirical manifestation of the wave. This interaction can be interpreted as the particle detection, or as the manifestation of the presence of the quantum system inside the region. whatever you call it particle or not.

Looking for a particular mass inside the barrier may not be correct to how things work in reality. Resisting the possibility that there is only wave length energy,contained but not sourced, constructing mass but not itself particular inside the unseen, forbidden, region within the barrier is not a contradiction to physical law, but matter only interpretations of what must be at work at this deep a level. Our opinions of what cannot be physically perceived at present also interferes with clear pictures of that which is too deep for our instruments and experimentation not to have too great an influence on the observed to obtain uncluttered observation. This is input from an information systems analyst researching quantum computer architecture and the possibilities of force field contained quantum digital signals, but it is correct to logic.

Actuality as i understand it the problem is that as you approach the particle in any way to measure it IT wont be there, further more just looking at it will change the nature of the experiment.

Not the answer you're looking for? Browse other questions tagged quantum-mechanics quantum-tunneling or ask your own question.

1
Finding particles in the classically forbidden regions
0
Quantum mechanics potential barrier problem
1
What happens if particle is measured outside finite well?
0
When an electron tunnels through a barrier, where would it be found when measured?
0
How particles can be found in classically forbidden regions?
0
Meaning of wave function which is in inside of the potential wall?
10
What is the kinetic energy of a quantum particle in forbidden region?
4
Where is the particle during a tunneling event?
4
Conservation of energy in quantum tunneling
5
Quantum Tunneling and Conservation of Energy
See more linked questions