How did Einstein come up with his postulates for Special Relativity using thought experiments on simultaneity?

In his popular book on relativity, in chapter IX, "The relativity of simultaneity", Einstein describes an experiment in which a flash happens simultaneously on A and B, as defined by the fact that an observer at the middle point M can see the light coming from A and B at the same moment:

So Einstein concludes that simultaneity is not absolute. And an explicit calculation using Special Relativity principles confirms this. The conclusion is that:

By setting $\gamma=1$, we obtain the result in Galilean Relativity (ie: "The time between the lightning strikes is $\tfrac{vd}{c^2}$"), which is the theory of space time before Einstein came out with Special Relativity.

Truly, I fail to see how can this thought experiment on simultaneity can give Einstein insights into Special Relativity. Anything I miss?

By setting γ to 1, we obtain the result in Galilean Relativity (ie: "The time between the lightning strikes is $\tfrac{vd}{c^2}$"), which is the theory of space time before Einstein came out with Special Relativity.

But remember that $\gamma$ is not some independant parameter. It's just shorthand for:

If you want to use the Galilean limit but keep $v$ non-zero the way to do this is to increase the speed of light to infinity (obviously this is a thought experiment). In that case $\gamma\tfrac{vd}{c^2} = 0$ and again $t = t' = 0$ so the lightning strikes are simultaneous in both frames.

The simple and short answer is that although Einstein did realize there is a difference whether you are moving towards or away from emitted ray of light, yet he derived his transforms for time and length considering the case in which the train is moving away from the station.

This is the situation he considered (look at the velocity vector): 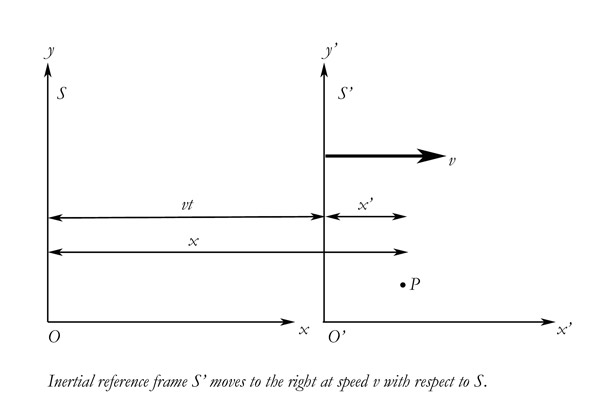 (Comment: Should anyone disagree as to what inertial frame should actually be primed, then it is not relevant for what I wrote: the train was leaving the station in Einstein's thought experiment.)

4
How to do calculation in relativity of simultaneity