Among others, this page says there is a giant cloud of antimatter at centre of the Milky Way, which was discovered in the 1970s.

My brother doesn't believe there is any such cloud. I'm prepared to believe it does exist, but can anyone explain in simple terms how the astronomers know it's there for sure?

Also - is there any quick and easy way to explain why the total amount of matter in the universe is thought to be more than the total antimatter (or confirm that we don't even know if that's true or not)?

There is antimatter, but "a giant cloud" is very much the wrong description for it. So let's clear up some possible misconceptions.

Antimatter is not that unusual to find...

Sure, it annihilates rather quickly when it interacts with normal matter, but space tends to be rather, well, empty. So if you make an antimatter particle, it might be some time before it can find something to annihilate with. Moreover, plenty of normal matter begets antimatter: radioactive nuclei with too high a positron/neutron fraction can undergo positron emission, where indeed they emit an antimatter particle.

...But it should be a relatively small fraction of total matter.

The "cloud" mentioned is a region with more antimatter than you might naively expect, but not overwhelmingly more. It is a large region with thousands of star systems, all behaving normally, and, as I'll calculate below, consists almost entirely of normal matter, even excluding the stars.

Tracing the news to its source.

First, we should find the original scientific publications here. The story you linked was actually based on this 2008 NASA press release, which was in turn written about the 2008 Nature article "An asymmetric distribution of positrons in the Galactic disk revealed by $\gamma$-rays".

Of note is that this "cloud" is old news - the abnormal antimatter signal was seen decades ago. All this paper does is note that the signal is coming from a region slightly off-center from the center of the galaxy, which might provide a clue to the source (more about that later).

How much antimatter is there really?

The Nature article gives us some important facts. First, the antimatter signal of interest is the $511\ \mathrm{keV}$ line. This is the result of a positron ($\mathrm{e}^+$) annihilating with an electron ($\mathrm{e}^-$), producing two high-energy gamma-rays (photons, $\gamma$): $$ \mathrm{e}^+ + \mathrm{e}^- \to 2\gamma. $$ Both gamma-rays have an energy of exactly $511\ \mathrm{keV}$, as can be shown from simple conservation of energy and momentum. Thus we know the antimatter is specifically some wayward positrons (anti-electrons), not whole atoms and molecules and such.

Where are the positrons coming from?

The excitement in these articles is the asymmetric placement of the cloud, as alluded to earlier. In particular, the Nature article claims this asymmetry is the same as that observed in the distribution of X-ray binaries near the center of the galaxy. Now X-ray binaries are stellar-mass black holes that are accreting material from a companion star, resulting in a hot accretion disk and maybe some relativistic jets pointing along the axis of the disk. Such extreme conditions can produce positrons, and these can be blown out into interstellar space, where they persist for a hundred thousand years or so.

The other intriguing idea that has been discussed is that the observed gamma-ray excess is related to dark matter annihilation. That is, the current best guess we have for the nature of dark matter is that is is a species of particle that very rarely interacts with anything else, but can occasionally annihilate with itself, producing photons or possibly other particles like positrons.

There are more positrons at the center of the galaxy than elsewhere relative to normal matter, but they are still a miniscule part of the interstellar medium. If there were an area consisting mostly of antimatter, or about equal parts matter and antimatter, either its surface or its interior would be incredibly bright, far brighter than any signal we detect.

This answers the observational part.

In the 1970s, gamma-ray detectors flown on balloons discovered a huge cloud around the galactic center. This cloud radiates the kinds of gamma rays that are produced when electrons and positrons annihilate each other. The cloud itself is roughly 10,000 light-years across, and shines with the energy of about 10,000 suns.

Thanks to the Integral satellite, astronomers may have an answer to their question. Integral, which was built and operated by the European Space Agency with help from NASA, discovered that the antimatter cloud is not perfectly centered on the galactic core. The cloud is longer on the western side than it is on the eastern side.

Integral also found that certain types of binary star systems are distributed in the same manner. These binaries consist of two stars: one star is a normal star, and the other is the dead remnant of an exploded star. These remnants can be so-called neutron stars or black holes. The black holes and neutron stars in these binaries are stealing gas from their companion stars, and when this gas falls onto the remnant, it heats up and emits X-rays. For that reason, these systems are known as X-ray binaries.

Larger image "Simple estimates suggest that about half and possibly all the antimatter is coming from X-ray binaries," says Georg Weidenspointer of the Max Planck Institute for Extraterrestrial Physics in Germany, who is the lead author of the team’s scientific paper. This paper is being published in the January 10, 2008 issue of the journal Nature.

The shape of the mysterious cloud of antimatter in the central regions of the Milky Way has been revealed by Integral. The unexpectedly lopsided shape is a new clue to the origin of the antimatter. The observations have debunked the chances that the antimatter is coming from the annihilation or decay of astronomical dark matter.

It is easy to generate electron positron pairs once one has X- rays and gamma rays, as with the binaries. Real relics of antimatter from the evolution of the universe should also have signatures from annihilation of nuclei, a much more energetic effect than electron positron annihilation. The gamma rays coming from pi0 decays (~ 1/3 of end particles in antiproton proton annihilation) are energetic (~70MeV at center of mass) and would be characteristic of a cloud annihilating. I have not heard of such observations.

Also - is there any quick and easy way to explain why the total amount of matter in the universe is thought to be more than the total antimatter (or confirm that we don't even know if that's true or not)?

Some particle antiparticle asymmetry exists in the standard model of particle physics which explains the laboratory observations, but cannot explain the primordial asymmetry. Theories, both at the elementary particle and the cosmological level, are being worked on but I know of none successful ones.

Yes it could be. If astronomers are sure that they can see gamma rays that are produced in matter-antimatter annihilation then yes. (unless that gamma rays are produced in star explosion). Produced energy can be described using Einstein's 'most famous' equation $E=mc^2$ (as page that you have mentioned says)

As your page that you have mentioned says matter-antimatter annihilation can be described using Einstein's equation $E=mc^2$, In this section we are considering Electron-Positron annihilation. Here's Feynman Diagram for that event:

or this reaction can also be represented in this way: $e^+e^-\rightarrow \gamma\gamma$, After annihilation they produce two gamma rays, the total produced energy looks like this $E=2m_ec^2$.

So in conclusion the answer is yes it could be. But it could be possible that it's wrong. Gamma rays can also be produced by supernova or hypernova (Star explosion (unless star had enough energy to produced enough antimatter and that antimatter would meet matter and they both annihilate and produce gamma rays): 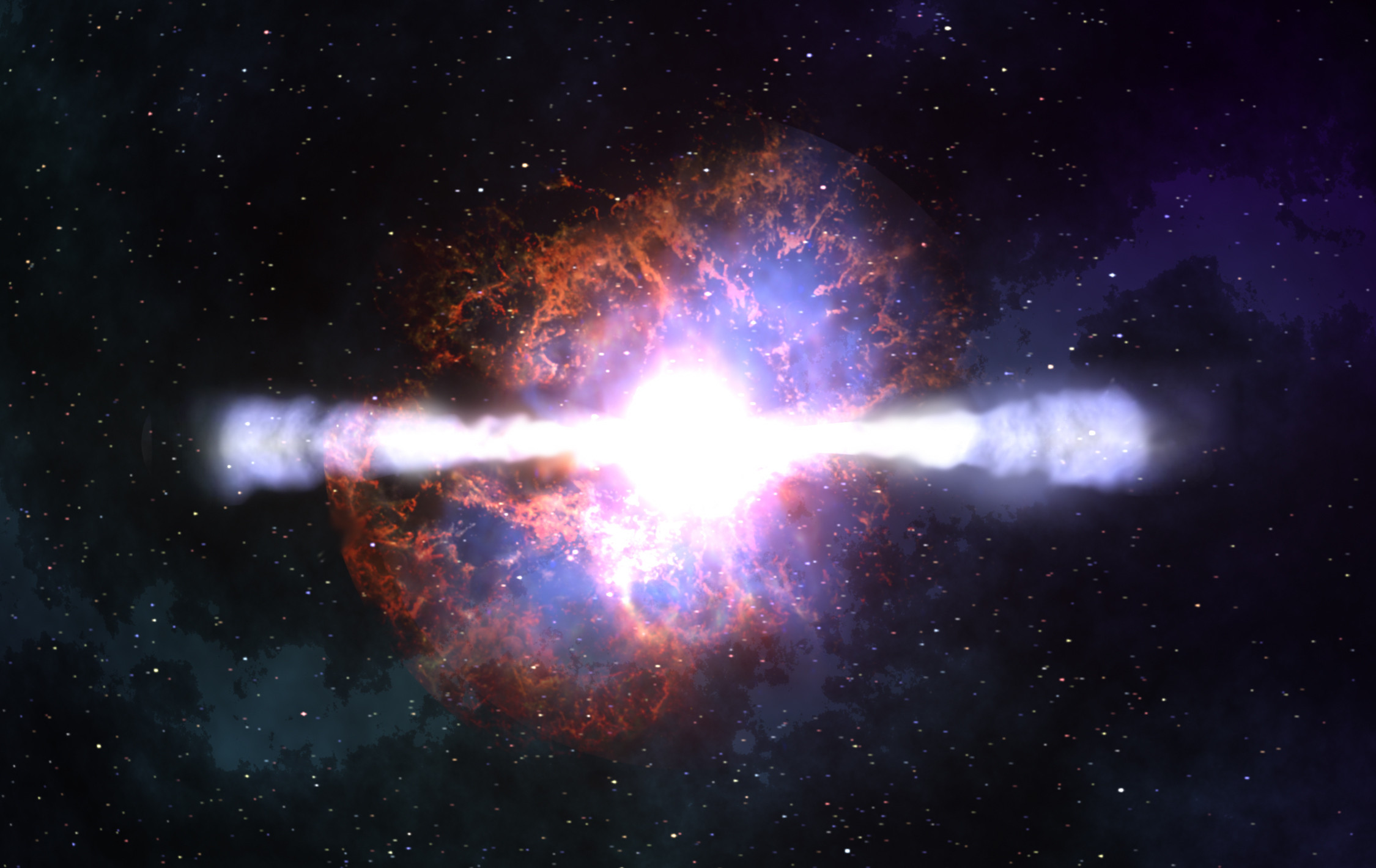 Or even by a Black hole in the center of our galaxy: 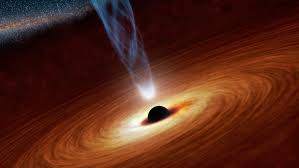 Not the answer you're looking for? Browse other questions tagged energy antimatter matter milky-way or ask your own question.

30
Could the black hole in the center of the galaxy be a white hole?

11
Names, maps for Milky Way dust clouds? (Dark Cloud Constellations)
10
Milky Way Voyeurism
0
Can/will antimatter ever be superior to fusion as a practical electricity source?
6
History of the Milky Way-Quasar
2
Are there different kinds of antimatter reactions?
4
Are we closer to an accurate 3D image of our galaxy using the Gaia billion star data set?
0
Can we get infinite antimatter from vacuum?is there infinite antimatter?
8
Is there cosmological redshift within the Milky Way?