How to do calculation in relativity of simultaneity

I have great trouble in understanding simultaneity in special relativity. Let me illustrate it with a concrete example.

Assuming there is a train, its two end points are $A$ and $B$, the length of the train is $x$. The train moves at speed $v$. Assuming the train is moving in the direction from $A$ to $B$.

The only safe way for beginners to answer questions in special relativity is to sit down with a large sheet of paper and work through the Lorentz tranformations:

So to answer your question we take the two spacetime points labelling the ends of the train and apply the transformations. This tells us where those two points are in the moving observer's coordinates.

To find the potition of the front of the train in the primed frame we just feed $t = 0$ and $x = d/2$ into the Lorentz transformations:

Length of the train

The rest is just algebra. We write the expression out in full to get:

Of course in frame $\tt T$ the train is stationary. In figure $\tt T$ you can see cartesian axes $(x,t)$ I will never use. They are there only to remind that from one frame to the other spacetime coordinates do change. There are three vertical lines, marked $\cA$, $\cB$, $\cM$. These are what I call objects: $\cA$ is the train's head, $\cB$ its tail, $\cM$ its mid-point. Since train is still, $x$-coordinates of these objects do not change with time. Therefore their worldlines have $x=\rm const.$ and are parallel to $t$-axis. 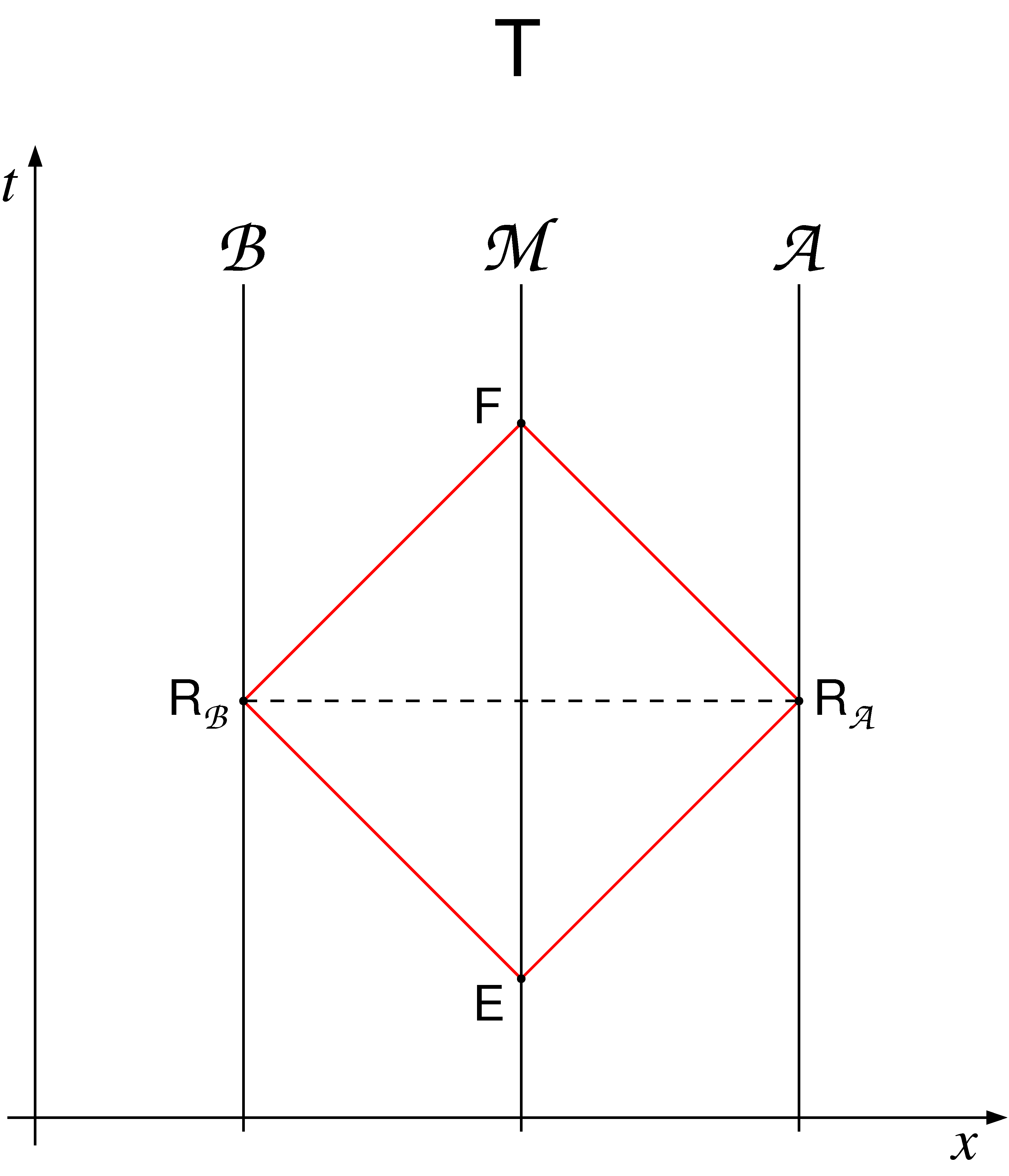 Continuing to examine the figure we see 4 points with their marks. There is one more than would suffice for Einstein's description of relativity of simultaneity, but this will help our analysis. Einstein's idea is to consider two lightnings, simultaneously falling at the train's extremities. In figure these are two events named $\RA$, $\RB$ (why R? I'll explain presently). That these events are simultaneous in $\tt T$ is shown by line $\RA\RB$ being parallel to the $x$-axis.

Note: I chose scales on $(x,t)$ axes so that 1 second in time has the same length as 1 light-second in space. In other words, I use units where $c=1$. Then worldlines of light signals are inclined 45$^\circ$ to the right or to the left.

But to physically ensure simultaneity, I do without lightnings and introduce two flashes starting from mid-point (event $\rE$). Events $\RA$, $\RB$ are defined as the arrivals of these flashes to $\cA$, $\cB$. Simultaneity is guaranteed by $\cM$ being the mid-point and by known assumptions about propagation of light. Flashes are reflected in $\RA$, $\RB$ and come back simultaneously to $\cM$ (event $\rF$).

Another thing to be noted in the figure is the red diamond. It depicts flashes' paths, from $\cM$ (mid-train) to head and tail, and vice versa. The only reason to draw it is to compare with its appearance in frame $\tt S$.

Let's now go to the next figure. It is drawn in frame $\tt S$, where the train is moving to the right, its speed being a fraction of $c$. But not too small a fraction (a relativistic train!) so as to make relativistic effects clearly visible. Axes are named $(x',t')$ since the same event has generally different coordinates in both frames. 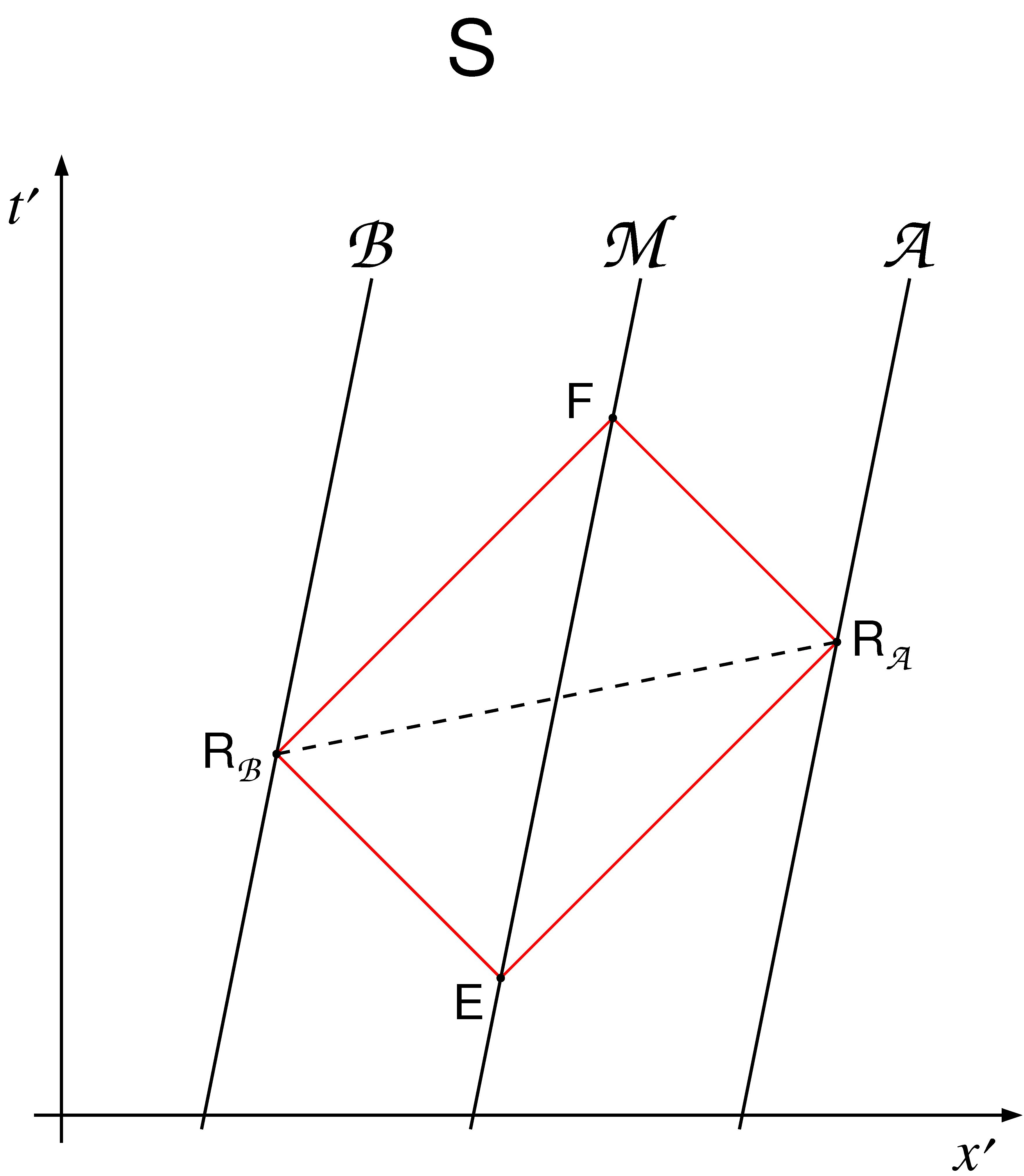 Worldlines of $\cA$, $\cB$, $\cM$ are still parallel straight lines (all objects, as parts of the same train have the same constant speed) and are leaning to the right. The $\cM$-line is halfway between the others, as $\cM$ remains equidistant from $\cA$ and $\cB$, even if the train is moving. (Nothing will be said about their distances: Lorentz contraction is present, but we do not need to know this, nor to know its amount.)

But something new is happening: line $\RA\RB$ is no longer parallel to $x$-axis. Let's see why. Follow the flashes emitted in $\rE$. Their worldlines are still at 45$^\circ$, since speed of light is invariant: it is the same in $\tt S$ as in $\tt T$, irrespective of whether its source is still or is moving. It's obvious that the flash aimed at the train's head will employ more time to reach its target than the other one, aimed at the tail. This is because the train's head runs away, whereas the tail goes meet the incoming light. (Note that this has nothing to do with relativity, once you accept that light has the same speed in both directions.) The same result can be arrived at by pure geometry, simply looking at the figure.

We are thus led to an inescapable conclusion: events $\RA$, $\RB$, which were simultaneous in $\tt T$, are not simultaneous in $\tt S$. More precisely, $\RB$ precedes $\RA$. Actually geometry tells something more, if we complete the flashes paths. Their meeting on $\cM$ is an event, and as such cannot change according the frame we use for our measurements. In words, the times of arrival of both flashes in $\cM$ stay always the same, i.e. the red figure is a closed polygon. Its sides are at 45$^\circ$, then the polygon is a rectangle (no longer a diamond, i.e. a square). This ensures us that diagonal $\RA\RB$ makes with $x$-axis the same angle as $\rE\rF$ makes with $t$-axis. (Going on, we could compute the delay of $\RA$ wrt $\RB$.)

Up to now I assumed light source were standing on the train, as well as mirrors reflecting the flashes. What about the opposite situation, when source and mirrors stand still on station's platform?

You have only to interchange roles between $\tt S$ and $\tt T$ i.e. exchange the figure labels, with no change in events names. To be precise, if train goes right wrt station, the station goes left wrt train. Then the slanted lines $\cA$, $\cB$,$\cM$ in the second figure should slant in the opposite direction. As a consequence, events $\RA$, $\RB$, now simultaneous in $\tt S$, aren't so in $\tt T$: $\RA$ precedes $\RB$. And that's all.

If we want to get some intuition about the notion of simultaneity behind this scenario, we can think about it like this. 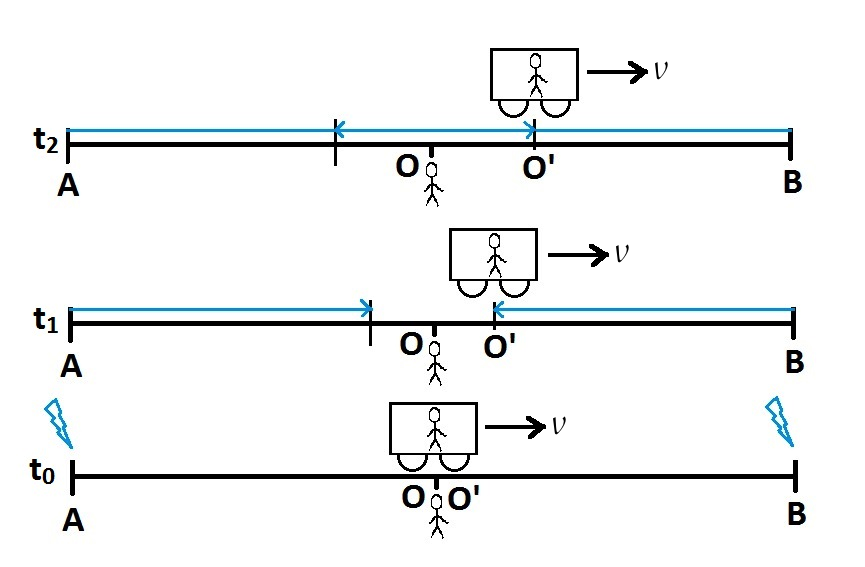 Now, if we want to know the time difference the moving observer would measure between the lightnings or various distances/lengths involved in this scenario, we have to use Lorentz transformation, just as exactly as Jonh Rennie did.

The Fabri's explanation is complete, but, if someone need numbers, we can use an interactive construction https://www.geogebra.org/m/duvwkba7 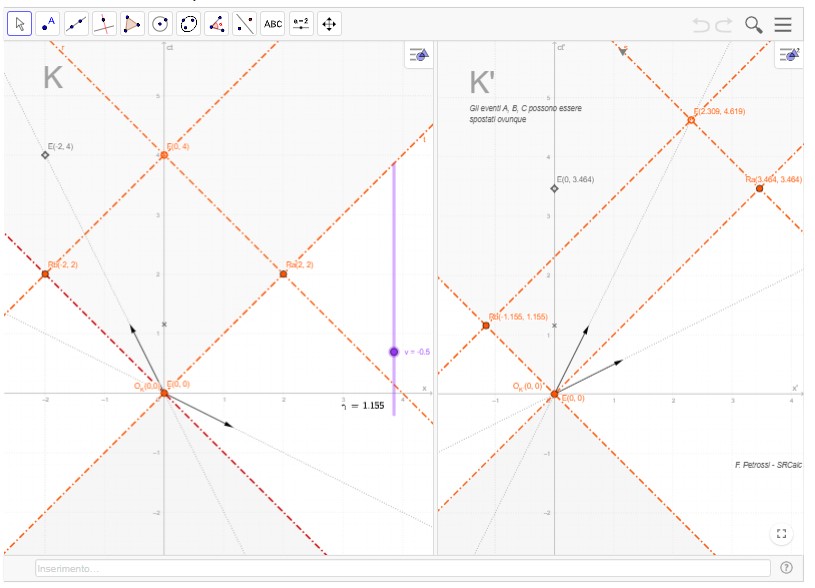 Now, the interactive construction is public. Sorry. The construction is the reproduction of Fabri' images (answer Oct 22 '18 at 7:08), adding numeric cohordinates. K and K' are frames T and S in Fabri's constructions, side by side instead of in sequence. I fixed, for example, a relative velocity of -0.5c of K' (or S) frame respect to K (or T). As Fabri says "the same event has generally different coordinates in both frames": not only for positions but also for different units (the arrows near O or O'). Look also to geogebra.org/m/wqf5bEum

(To down-voters: Could you be, please, so kind as to comment, which sentence in my reasoning you find faulty and why? It would allow everybody to learn from you)

OK, I'm not sure now where exactly did the lightnings strike. Did they strike the ground or the train? Therefore, and since Graviton asked this question to better understand the simultaneity of relativity, I will give the answer for both options.

Although at first glance it might seem that where the lightnings stroke makes no difference, it is actually of utmost importance. Because whether the observer is stationary, or moving towards (away of) the emitted light changes everything. To make it clear and easier to follow, let's consider only the passenger of the train first and replace lightnings with flashlights.

If the flashlights are located at the front and at the end of the moving train, but still inside it, they are considered stationary for our passenger. There is no movement between them and the observer, they are all equidistant for the whole time. Therefore SR allows us to disregard whatever is happening outside the window, whether we see anything moving or not. This means the passenger will see both flashes at the same time.

(If that's not clear, lets talk about our Sun. We are about 8 minutes away from it. Lets say it sends us a clearly distinguishable and short green flash. The question is, what happens if we, at the moment of sending the light, take off in a spaceship and move toward the green flash with considerable velocity - near $c$ let's say? Will we intercept it sooner, than if we stayed on Earth? Sure, we will meet the green light almost halfway from Earth to the Sun, after about 4 minutes. But then, if we took off in our racket, but moved away from the Sun, we would be caught up by the green light much later than after 8 minutes. Therefore our movement relative the source of light does matter. And yet, if we stay on Earth we will see the green flash after 8 minutes, although our Solar system is constantly moving together through space.)

So I think we can go to our 2 cases now.

If both observers are exactly in the middle of the two events happening simultaneously, then the relative movement of the "source" of light (i.e. places on the moving train which the light got reflected off) makes no difference here. The passenger on the train is not moving relative to the local sources of light (the beginning and the end of the train are traveling along with him), so he must see them simultaneously. The person outside of the train was in relative movement in respect to the train when the lightnings stroke it, but this movement was perpendicular to the direction of the light he saw, so at the moment of sending the rays he can be considered "stationary" as well. After the rays were sent, he didn't move in the direction of the sources (the sources moved to his side, but it was after). The light was sent at certain moment, and the movement of the sources afterwards does not matter (if the train disappeared just after sending the light, the observer would still see the lights, right?). Therefore he will also see the lightnings simultaneously.

The person on the ground will obviously see the lightnings simultaneously in this situation. He is exactly in the middle and stationary relative to the sources of light, so this case is straightforward. However, for the passenger on the train the situation is completely different now. He is moving toward one ray of (reflected) light and away from the other. Therefore, he will see the lightning emitted in front of the train first, he will intercept it sooner than the light from his back will reach him. No simultaneity here.

To sum up - although both situations (1 and 2) might seem similar, so at first it might seem the answers should also be the same, but there is a significant difference between them. The velocity of the observer on the ground relative to the light emitted already is zero in situation 1., but the velocity of the passenger relative to the light emitted is non-zero in situation 2. This changes everything.

One last comment - although the direction of relative movement does make the difference as we saw, yet the speed of light will always be measured as $c$.

(I'm not going to do the calculations here, as John Rennie did them in his answer already.)