Rocky Planet in the center of System [duplicate]

Ask Question
Asked 6 years, 11 months ago
Active 6 years, 5 months ago
Viewed 1k times
7
$\begingroup$
This question already has answers here:
Could there be a star orbiting around a planet? (6 answers)
Closed 6 years ago.

We all know that mostly stars are at the center of planetary systems, but is it possible that instead of a star there was a rocky planet in the center with stars (and other planets and moons) orbiting it?

To be more concrete: Is it possible for a star to have the same mass and radius as e.g. the Moon and orbit a planet like Earth at the same distance (at which Moon orbits Earth in actuality)?

Is it possible for a star to have the same mass and radius as e.g. the Moon and orbit a planet like Earth at the same distance (at which Moon orbits Earth in actuality)?

No. The lowest mass type of star is a Brown Dwarf, which still has a mass greater than that of Jupiter. Even brown dwarfs have too little mass to fuse light hydrogen.

Neutron stars can have much smaller radii than the moon, and white dwarfs can be about the same size of the moon, but they have much greater masses.

This is not possible.

The lowest possible mass for a main sequence star (sustaining H-1 fusion; it's the regular kind of star) is around 80 Jupiter masses. Just below this, objects are referred to as Brown Dwarfs, which are technically not stars. Whereas the highest possible mass for a terrestrial planet is about 5-10 Earth masses (as per here). Above this cutoff, an object is so massive that it attracts enough gas to qualify as a gas planet (or larger object)

For a star below the 75-80 Jupiter mass cutoff, it cannot fuse Hydrogen-1. Below 13 Jupiter masses, it cannot even fuse deuterium. All of these masses are well above the 5-10 Earth masses that is the cutoff for a terrestrial object.

The following image might help to illustrate the relative scales of different astronomical bodies. As you can see, a brown dwarf can only emit the faintest glow and is still much more massive than Earth-sized objects. 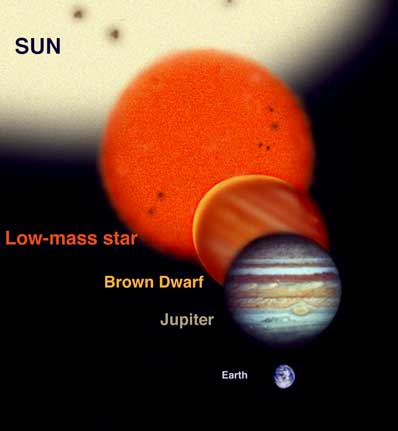 In short, anything massive enough to fuse Hydrogen and emit light in the visible spectrum would be far more massive than a neighbouring rocky object. So much so that it would always seem as though the rocky object is orbiting the center of the star, not the other way around.

Orbits are a funny thing, in space bodies have gravitational effects on one another. In a system like our solar system none of the objects including the sun are truly stationary in relation to one another. Even stars move around based on the gravitational pull of their planetary bodies. this wobble allows us to detect planets in solar systems far away from ours and even estimate their masses.

In real terms however this would be incredibly unlikely and would not be defined by the mass of the object at the CoM of the system.

One plausible scenario where this might occur would be two stars of similar sizes orbiting each other with a planet stuck in balance between them.

35
Could there be a star orbiting around a planet?
4
Direct rocky planet formation without protostellar disk?

6
Earth-Moon orbiting each other after being engulfed by Red Giant
0
Why the Moon does not change its orbit from Earth to an another planet?
1
Can a planet have multiple significant sized moons?
33
Is there a maximum distance from a planet that a moon can orbit?
0
Why do objects weigh less the further from Earth's center?