Assuming everything is ideal...

If you try to inject another electron into the ferromagnetic material, that other electron has to go somewhere — into an orbital around some atom. If it wants to go into the lowest-energy orbital, its spin has to be antiparallel to the spin of the unpaired electron that's already there. If the spins of the injected are fixed to be parallel to the unpaired electron spins in the material, then all of the lowest-energy orbitals appear "full," and the injection requires more energy. Effectively the ferromagnet has a different work function for different electron spins.

Complicating any handwavy discussion of this is the fact that the electron magnetic moment is negative.

I'm not a solid-state guy, so I invite others to correct me …

Here is a page about half-metallic ferrormagnets with figures and references. In particular the first figure shows the differing densities of states for majority- and minority-spin electrons in one material: 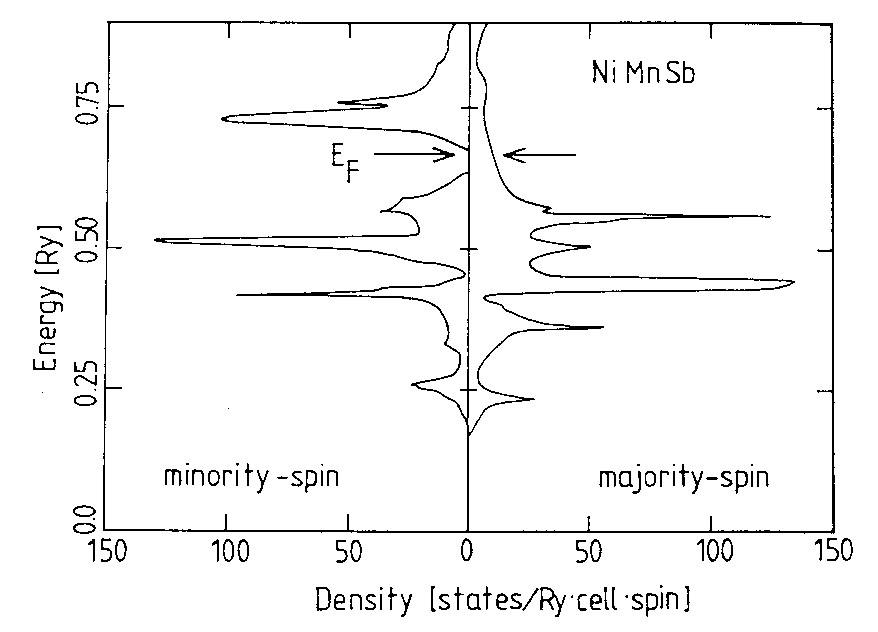 I think that producing these sorts of diagrams for a real material involves lots of solid-state black magic, but the fact that a gap appears at the Fermi energy for minority-spin electrons does mean that all the conduction electrons will be polarized.

4
What happens when you pass a current through a coil made of a ferromagnetic substance?

6
How do High Electron Mobility Transistors (HEMT) work?
2
Why does a field-effect transistor (FET) with wrap-around gate work at all?
0
Giant Magnetoresistance (GMR), antiparallel magnetic moments, and north/south fields
2
After a diode start conducting, can you increase voltage across the diode without current change in the diode?
1
Why don't the electrons in a paramagnetic material precess around an external field?
2
In LED's do the number of charge carriers (electrons and holes) decrease with time?
1
Why can't a single photon pass through a slit if it is perpendicularly (relative to the slit) polarized?
0
Is this actually a Group II, Group IV transistor? What should its properties be?
0
Why does Malus's Law contain a cosine-squared term instead of an absolute-value-of-cosine term?