Why do grey body radiators not heat up?

So I'm doing so work on the earth's climate system, and modelling it as a grey body radiators, and I've come across the phrase: "$62\%$ of the outgoing energy is lost to space and the other $32\%$ is absorbed by earth's atmosphere".

Surely is energy is constantly being absorbed by the Earth it would just keep heating up for ever?

Surely is energy is constantly being absorbed by the Earth it would just keep heating up for ever?

The SI unit for absolute temperature T is the kelvin.

is the emissivity of the grey body; if it is a perfect blackbody,

=1. In the still more general (and realistic) case, the emissivity depends on the wavelength,

So a body at temperature T will absorb some energy E and its temperature will go up so it will radiate with the higher temperature. If the input radiance is much higher than the black/grey body radiation of the body irradiated, it will heat up until it combusts or melts or vaporizes. Fortunately the earth is far enough from the energy source to have reached an equilibrium , as we have seen by observations.The equilibrium can be disturbed by changes in the grey body constants, or by changes in the amount of energy impinging the earth. Then temperatures can go up, climate optima historically, or down, ice ages. 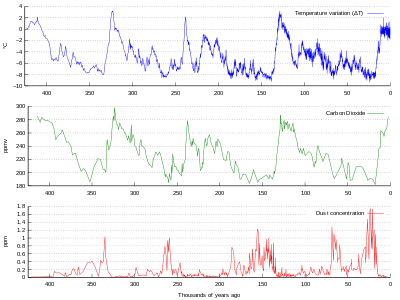 Yes, indeed, if the Earth were unable to get rid of all the incoming radiation, or if there were too much of it, the Earth's temperature might be like Mercury's or Venus'. Luckily for us, the Earth is in a "sweet spot" where the energy radiated from the Earth balances out all the energy coming in.

You can do simplified analysis yourself. Use 1365 W/m^2, which is the solar constant at the edge of the atmosphere, impinging on a 1m^2 blackbody plate in Earth's orbit which then radiates all of its energy into a 2.7K background from both sides of the plate. Solve for T in Planck's equation results in 331K, which is hot, but this simple equation ignores a bunch of stuff.

We know that ~30% of the sun's energy is directly reflected from the Earth: http://en.wikipedia.org/wiki/Albedo#Terrestrial_albedo so reducing the 1365 by 30% drops the temperature to 303K, which is 30C and close to the average temperature of the Earth.

Further refinements will get the number closer. See http://en.wikipedia.org/wiki/Earth%27s_energy_budget for more details

Yes, unless all the accepted energy transformed into non-thermal form (like sunlight+CO$_2$+H$_2$O turning into sugar). It is generally assumed that in the long-term (more than one year?), the Earth radiates roughly as much energy as it receives from the Sun.

Not the answer you're looking for? Browse other questions tagged energy radiation earth climate-science blackbody or ask your own question.

0
The effects of nuclear warhead detonations on the Earth's environment and global warming
3
Having trouble understanding the work-energy principle intuitively
2
What has the potential energy: the spring or the body on the spring?
3
If we harvest energy generated by Coriolis Effect of the earth, will the earth slow down?
101
Explain it to me like I'm a physics grad: Greenhouse Effect
1
Are there “eccentric seasons”, where do they occur, and why don't we hear more about them?
61
Why don't solar panels contribute to global warming?
6
Shouldn't $CO_2$ forcing depend on the surface temperature?