Why does ice melting not change the water level in a container?

I have read the explanation for this in several textbooks, but I am struggling to understand it via Archimedes' principle. If someone can clarify with a diagram or something so I can understand or a clear equation explanation that would be great.

Assume we have one cube of ice in a glass of water. The ice displaces some of that water, raising the height of the water by an amount we will call $h$.

Archimedes' principle states that the weight of water displaced will equal the upward buoyancy force provided by that water. In this case,

where $V$ is volume of water displaced, $\rho$ is density of water, $A$ is the surface area of the glass and $g$ is acceleration due to gravity.

Therefore the upward buoyancy force acting on the ice is $\rho Ahg$.

Now the downward weight of ice is $m_\text{ice}g$.

Now because the ice is neither sinking nor floating, these must balance. That is:

Now when the ice melts, this height difference due to buoyancy goes to 0. But now an additional mass $m_\text{ice}$ of water has been added to the cup in the form of water. Since mass is conserved, the mass of ice that has melted has been turned into an equivalent mass of water.

The volume of such water added to the cup is thus:

That is, the height the water has increased due to the melted ice is exactly the same as the height increase due to buoyancy before the ice had melted.

Edit: For completion, since it is raised as a question in the comments

Melting icebergs boost sea level rise, because the water they contain is not salty.

Although most of the contributions to sea-level rise come from water and ice moving from land into the ocean, it turns out that the melting of floating ice causes a small amount of sea-level rise, too.

Fresh water, of which icebergs are made, is less dense than salty sea water. So while the amount of sea water displaced by the iceberg is equal to its weight, the melted fresh water will take up a slightly larger volume than the displaced salt water. This results in a small increase in the water level.

Globally, it doesn’t sound like much – just 0.049 millimetres per year – but if all the sea ice currently bobbing on the oceans were to melt, it could raise sea level by 4 to 6 centimeters.

Here is an explanation that needs no explicit equations.

Consider the following diagram, in which part1 and part2 represent the ice.

Now look at what happens when both part1 and part2 melt:

And we just said that part1+part2 mass water has part2 volume. 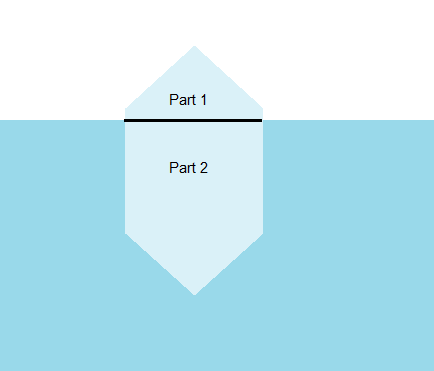 Brandon, above, gets right to the point. Frozen water displaces its own mass in the rest of the water, which means in effect it displaces an amount equal to itself. While frozen it is larger in volume, and thus less dense, because of hydrogen bonding -- that's why it floats -- and when it melts it returns to the liquid state (surprise!) at essentially the same density as the surrounding water. A given quantity of water, temporarily larger in volume but correspondingly less dense because it has frozen, returning to the liquid state will thus not raise the overall level of water (assuming here no evaporation, mosquitoes stopping in to have a sip, etc etc) --

Consider an ice cube of 10cm, assume that the density of water and ice is 10:9. At first, the ice has 9 cm in the water, when it melts, it becomes water with the volume 10*10*9. Just fills the melted ice original in the water.

While the two existing answers offer some good science, on why the water level does not change, they are both slightly over optimistic. While the level will not rise, it will not remain the same either. Evaporation will occur simultaneously with melting, and the water level in the glass will actually lower slightly.

Even if the ice remains frozen the process of Sublimation will allow the ice to evaporate. You have may seen this occur in your freezer, or with snow on your porch

The displacement answers of mew and kal are spot on.

This is about the chemistry of the displacement.

Water is the only substance with solid density less than the liquid. (For the record there is one other, namely the element Gallium).

Water is very a interesting molecule in that it is very stable and still polar. Two hydrogen and one oxygen in a triangle. The oxygen is slightly negative and the hydrogen positive. When they settle into a solid they form a lattice that is less dense than the liquid state. Water has a maximum density as 4 Celsius.

If ice was more dense than water we would be on a much much different earth. We would probably not be on this earth.

Another non-math way to look at it.

It does, it lowers it. Frozen water takes up more space that liquid water (you'll notice it floats -that is because there is less mass per volume). As it melts it takes less space per area thus the water level goes down.

asdfasdf
1
$\endgroup$
1
Add a comment  |
Highly active question. Earn 10 reputation (not counting the association bonus) in order to answer this question. The reputation requirement helps protect this question from spam and non-answer activity.

Not the answer you're looking for? Browse other questions tagged water buoyancy states-of-matter ice or ask your own question.

4
Water level of ice in cup
0
What will happen to the level of water when the ice melts?
0
How does the melting ice cube in a glass of water doesn't change the water volume?
-1
A pure water ice cube with sides 2cm long floats in a liquid in a glass beaker
46
Does the sea level increase if an iceberg melts?
10
Can ice melt in a perfectly closed container?
4
Why does not ice float in this case just instantly after melting?

2
Why does salt on snow create Ice?
28
Why does the water rise?
2
Why water from upper level not goes into lower level in this drainage system
1
why does an object float in the centre of water?
0
How cold does this ice have to be to freeze this water bottle solid?
1
Melting ice made with tap water
1
Why will the water not overflow when ice melts?