Consider the following parallel plate capacitor made of two plates with equal area $A$ and equal surface charge density $\sigma$: 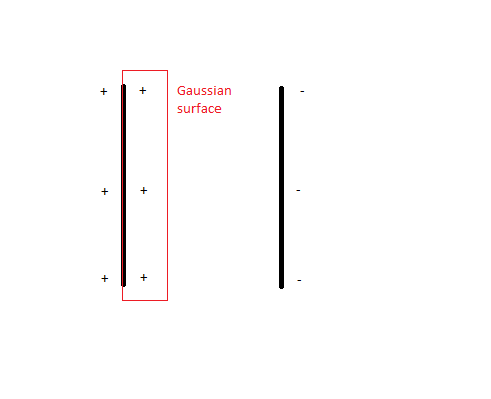 The electric field due to the positive plate is

And the magnitude of the electric field due to the negative plate is the same. These fields will add in between the capacitor giving a net field of:

If we try getting the resultant field using Gauss's Law, enclosing the plate in a Gaussian surface as shown, there is flux only through the face parallel to the positive plate and outside it (since the other face is in the conductor and the electric field skims all other faces).

where $E$ is the electric field between the capacitor plates. From Gauss's Law this is equal to the charge $Q$ on the plates divided by $\epsilon_0$

I know there is something fundamentally incorrect in my assumptions or understanding, because I frequently get conflicting results when calculating electric fields using Gauss's Law. I am, however, unsuccessful in identifying this.

Edit: Also, another problem I noticed was that even if we remove the negative plate from the capacitor and then apply Gauss's Law in the same manner, the field still comes out to be $\sigma/\epsilon_0$ which is clearly wrong since the negative plate contributes to the field. So, maybe the problem is in the application of Gauss's Law.

This is an extremely common mistake in introductory EM - from students who actually spend time thinking about the problem, anyway ;-) Use Gauss's law in both cases:

In the case of infinite plates, you do not have the result you give first. A Gaussian cylinder has two disks on either side of the plate, so $$E_1(2A)=\frac{\sigma A}{\epsilon_0}\rightarrow E_1=\frac{\sigma}{2\epsilon_0}$$ And from superposition you get the total electric field $$E=\frac{\sigma}{\epsilon_0}$$

You second case is correct, but the charge enclosed by your surface is $Q/2$ relative to the first case (conservation of charge, if you want the same answer you better have the same total charge on the plates), so $$E_1A=\frac{(\sigma/2) A}{\epsilon_0}\rightarrow E_1=\frac{\sigma}{2\epsilon_0}$$ Which again gets you the same answer when you apply superposition.

Consider first a single infinite conducting plate. In order to apply Gauss's law with one end of a cylinder inside of the conductor, you must assume that the conductor has some finite thickness. In doing this, the surface charge density $\sigma$ must be spread over both sides (think of this as a finite plate with a small thickness and then stretch it out to infinity. Using Gauss's law with this plate (either putting one end of the cylinder in the conductor or one end on both sides) gives a result of $E = \frac{\sigma}{\epsilon_{0}}=\frac{Q}{2A\epsilon_0}$. 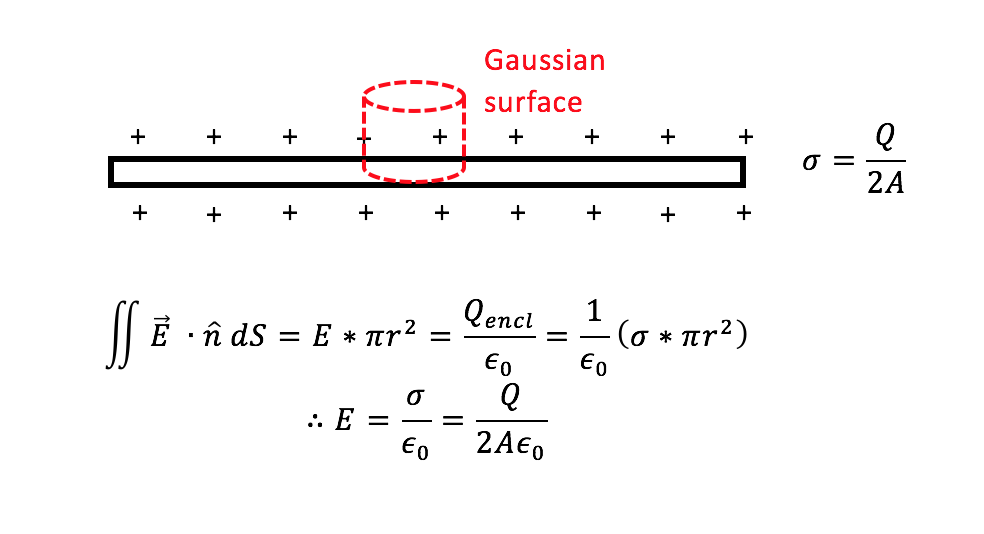 Now imagine bringing the second plate, with opposite charge density $-\sigma$ in from infinity. Because these plates are conductors, charges in each plate will move around to cancel the field from the opposite plate inside of the conductor (remember $E = 0$ inside of a conductor). Because the electric field produced by each plate is constant, this can be accomplished in the conductor with the net positive charge by moving a charge density of $+\sigma$ to the side of the plate facing the negatively charged plate, and $-\sigma$ to the other side. The opposite will be done in the negatively charged plate. One can now apply Gauss's law with a cylinder around the positive plate to find $E = \frac{2\sigma}{\epsilon_{0}}=\frac{Q}{A\epsilon_{0}}$. This is consistent with adding the electric field produced by each of the plates individually. 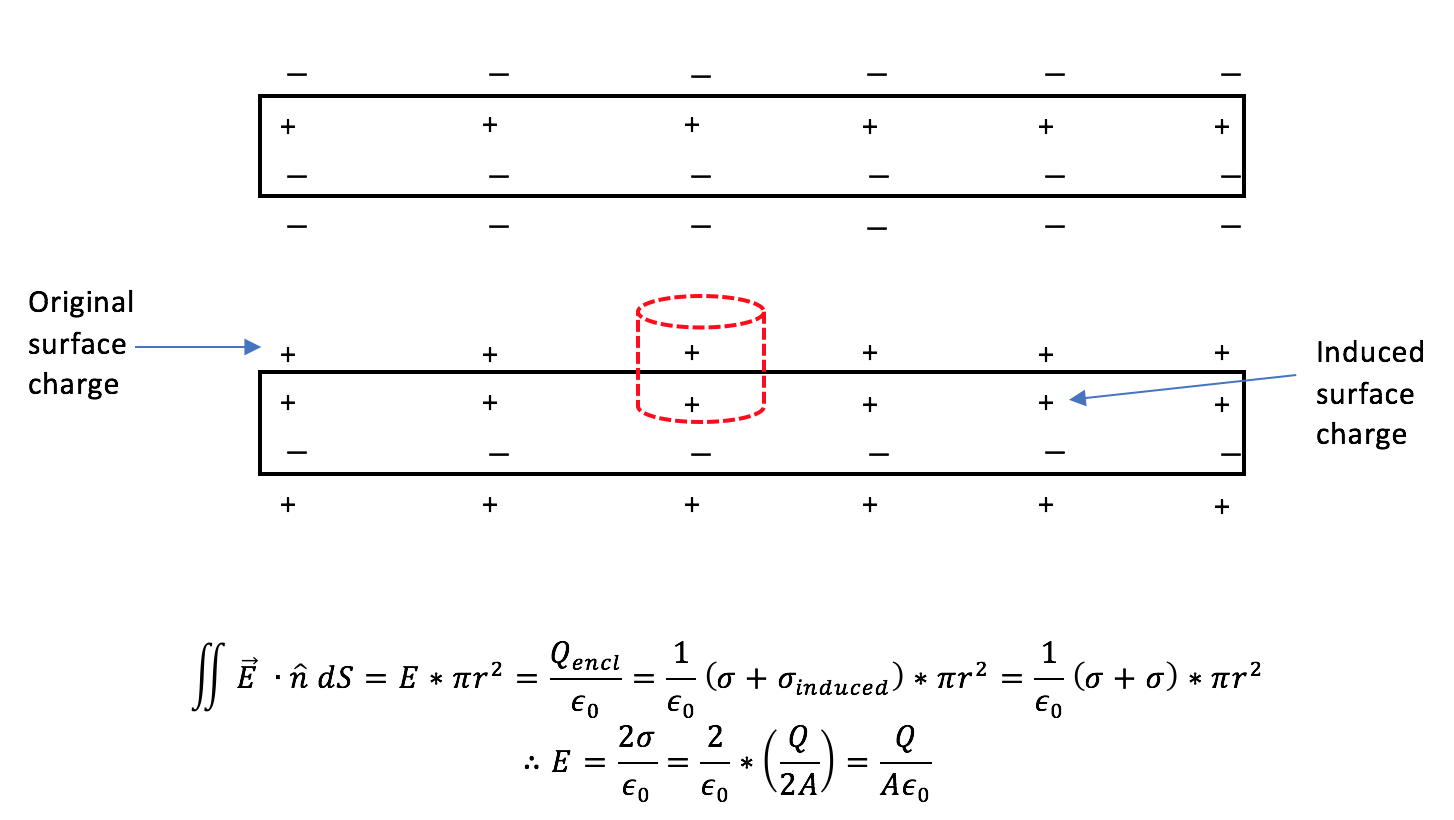 In a capacitor, the plates are only charged at the interface facing the other plate. That is because the "right" way to see this problem is as a polarized piece of metal where the two polarized parts are put facing one another.

In principle, each charge density generates a field which is $\sigma/2 \epsilon$. It is just that the actual geometry of the plate capacitor is such that these fields add up in the slab region and vanish outside which explains the result you find with Gauss' law. Remember that Gauss' law tells you the total electric field and not the one only due to the charge you are surrounding. That is because, when using Gauss' law, you also uses some boundary conditions. In your calculation this total field thing comes from the fact that you put in by hands that the field had to be zero in the plates.

To illustrate that, let us compute the case of a single plate in the universe and then that of two plates.

Imagining a case where the external field is zero or the fact that there are actually metallic plates in the system gives the usual result that the field is $\frac{\sigma}{\epsilon}$ inside and zero outside.