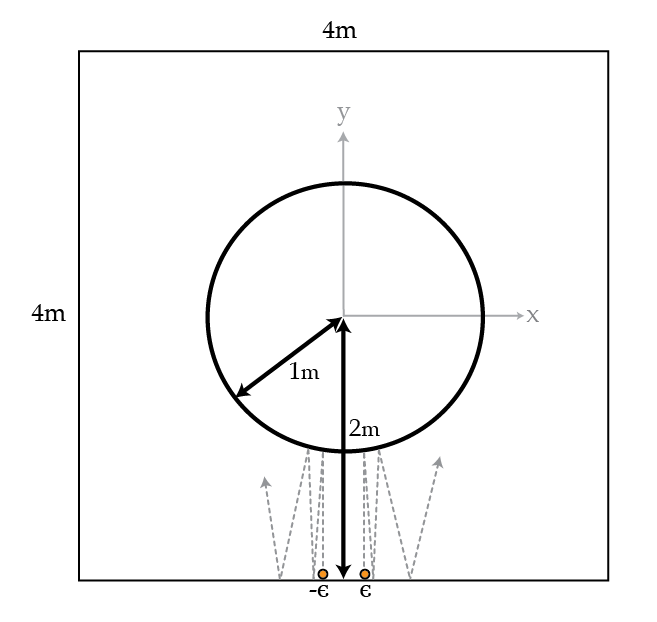 While i was studying about chaos theory, i stumbled upon this, When a ball confined in a square, and at the center is located a circle, is to bounce elastically, the path of the object deviates significantly. thereby causing chaos. I think this is equivalent to a sinai billiard.

I couldn't understand the motion completely, but to start of with a simple case let two balls be located at the y-coordinate at the bottom middle,and the x-postion be with an uncertainty of $\pm \epsilon$ as shown in the above figure. The balls start moving with a velocity purely in the y-direction.

What was claimed was that after successive bounces, THe ratio of the bounces could be determined.That is the ratio of the distance the two balls are from each other, for example After the $5th$ bounces from the square and $10th$ bounces from the square,their distance ratio could be determined. I really have no ideal how to begin with this problem. I know this is chaotic system and the initial errors in the position of the ball affects the later outcome, but i don't know how to proceed. Pleas help? And of course $\epsilon$ can be taken to be very small.

What is determinism ? If you have a function $y=f(t,y_{0})$ then you can say that $y$ is deterministic interms of $t$ and $y_{0}$. A dynamical system is governed by the same equation where $t$ is the time and $y$ is the position of the particle. As you know time $t$ and the initial condition $y_{0}$ you can clearly speak about $y$ at any time.
But what if $f(t,y_{0})$ is nonlinear ? Then we have a problem.There is always an error in our measurement of $y_{0}$. If my initial condition is $y_{0}+0.0000000001$ as time progress this small difference can grow exponentially and it grows above the measured value. Hence we cannot say, at which position the particle will end up. But in the short time regime there is no problem. The system is highly predictable, but in long term the predictability is lost. A simple example is to drop an A4 sheet paper from a given hight then observe the trajectory. Do the same experiment with the same height but with a slightly tilted position of the paper and observe the trajectory and you will understand chaos easily.

To solve your problem it is better to understand a simple one dimensional system called the bouncing ball system which is almost similar to this problem but more simple. You can make a nonlinear map between the one collision and the other. Then the problem can be solved numerically with the help of the nonlinear map. For the reference see the article by myself and the references therein http://www.sciencedirect.com/science/article/pii/S1007570411006678

Not the answer you're looking for? Browse other questions tagged error-analysis determinism chaos-theory or ask your own question.