One of the suggested diagrams for the Higgs production is the following: 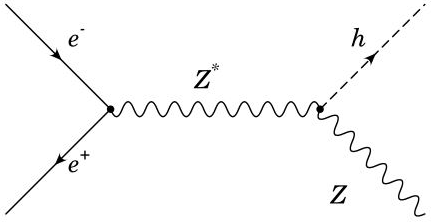 Why can't the electron-positron pair decay directly into a Higgs boson?

The electron-positron pair can produce directly a Higgs boson, but this process is very suppressed, because the coupling between the leptons and the Higgs is proportional to the tiny mass $m_e$:

On the other hand, the process $e^+ e^-\to H Z$ is more likely to happen, because the coupling between $H$ and $Z$ is proportional to the $W$ mass:

The $^*$ notation does not mean excited in this case, it means "off shell" (i.e. virtual or having the "wrong" mass).

At the second vertex the $Z^0$ is put "on-shell" by the emission of a Higgs (note, however, that it will decay very quickly in any case).

The lepton pair can annihilate directly to the Higgs, but the event is experimentally identical to annihilation to photons or $Z^0$s (because the thing that makes a coupling possible is that both side have compatible quantum numbers, so that (at tree level) all three possibilities decay to very similar end states).

The reaction pictured is experimentally identifiable because the on-shell $Z$ decays to an lepton pair with a mass of 90 GeV and the Higgs decays to a limited choice of end states that are mostly reconstructable and add up to the Higgs mass.

Finally, I would certainly not describe this reaction as a "decay".

6
How do we distinguish between virtual particle exchange and particle decay?
2
How is a Higgs boson created?
3
Electron-positron annihilation with photon production. Virtual particle
3
Electron/Positron pair production in free space?
1
Higgs to 4 lepton decay involving virtual photon
1
How are branching ratios for the Higgs boson calculated?
1
Theory behind the experimental signatures of Higgs-Boson
0
Momentum conservation when virtual photon decay into lepton pair
0
How can I interpret this result of Higgs boson decay?