I can't understand the spectrum in the figure on page 19 from Argyres' lecture notes on supersymmetry: http://www.physics.uc.edu/~argyres/661/susy1996.pdf

Argyres is considering a supersymmetric quantum mechanical system of an anharmonic oscillator, with a superpotential $W\sim x^3$. The plots of $W$ and $V$ make perfect sense. What doesn't make sense is the spectrum on the right.

Additional request: Would someone please write down the form of $H_1$ and $H_2$ in their answer, so to make sure we're on the same page? A graph of the the respective potentials $V_1$ and $V_2$ would be even better.

Take a look at the much more sensible figure on page 7. This is something that I can comprehend. 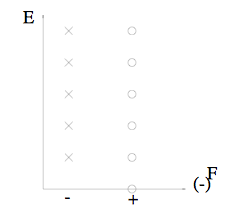 The plots you compare are actually not the same. The one on page 7 shows what the spectrum looks like if the ground state is chosen to be spin-up. The spectrum is degenerate and the theory is supersymmetric as we can show the vacuum to correspond to a zero-energy state. In principle, one can also choose it to be the other way around and arrive at the same spectrum. The vacuum is still at zero energy and the spectrum should be degenerate.

It turns out that this is only true classically. Non-perturbative tunneling-effects (instantons) destroy this equivalence: the spectrum in which the vacuum is a spin-down state is no longer degenerate with the spin-up vacuum. This "lifting" of the energy levels is shown in the figure on page 19. $H_1$ and $H_2$ correspond to the aforementioned classically degenerate, but quantum mechanically non-degenerate ground states.

Despite the use of the letter $H$, $H_1$ and $H_2$ are not two different hamiltonians, but refer to the hamiltonian $H$ acting on the ground states $|1\rangle$ and $|2\rangle$. Furthermore, there is only one potential, i.e. the one in the plot you have included in your question.

Not the answer you're looking for? Browse other questions tagged quantum-mechanics supersymmetry or ask your own question.

11
Interpretation of the Instanton in SUSY QM