Is there no radioactive decay between nuclear fusion and solid material formation?

I'm aware my question might be considered a duplicate of this one: Radio-dating and the age of the earth

I read that one and I looked everywhere and I still can't find my peace of mind. I would really like to understand the following points:

Please bare with me and excuse my "highly scientific" vocabulary.

I have an experiment I would like to imagine in order to discover what I'm doing wrong:

Let's say that event 4. was happening after 0.99 uranium half-lives and the uranium nucleus still hadn't decayed. Isn't it imminent that the nucleus will decay pretty soon after event 4. ?

I mean, I understand that if the nucleus would've become thorium or protactirium or lead it wouldn't've gotten stuck in the crystal for chemical reasons, but if it was still uranium what does that say about the internal clock of the nucleus which had been ticking for 99% of the half-life ?

Is that clock reset because of external electromagnetic reasons the moment the nucleus becomes part of the crystal ?

Thank you for your indulgence

If [the nucleus] was still uranium what does that say about the internal clock of the nucleus which had been ticking for 99% of the half-life ?

The answer is "nothing," because a single nucleus doesn't have an internal clock.

Here's a better model for what's happening in an unstable nucleus. Think of it as an enclosed container with a small hole, or a tunnel, somewhere near the top. 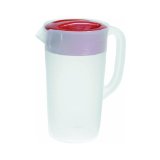 Somewhere down in the bottom of the container is a rubber ball. That's the alpha particle. But the whole thing isn't just sitting there, static, because oscillators in quantum mechanics don't sit still even in their lowest energy states. The container is jumping and jiggling around, like it's on a paint shaker, and the ball is constantly bouncing off the bottom and off the walls. Importantly, the hole in the container always stays up near the top.

What happens to this system over the long term? Most of the time the ball only bounces partway up the walls of the container and falls back down. Sometimes it goes higher than the opening — but because the opening is small, the ball usually misses and falls back to the floor again. Eventually, by chance, the ball will find just the right trajectory so that it hops right out the tiny exit hole and leaves the container for ever. But the vibrations that take the ball near the hole are chaotic, and there's no way for you know whether the ball is "about" to come out or how long it's been bouncing around. Every time the ball hits the bottom, it gets a new random trajectory. The dice roll again.

The key fact you don't seem to realize is that the radioactive nuclei have no memory. Each second is a new second, and the probability the nucleus decays in the new second does not depend on how long it has been around. The only reason the decay rate of a material decreases with time is that after time a fraction of it has already decayed.

Thus when the fraction of uranium that lasted long enough to mix with the zircon does in fact mix, you can treat that uranium as having just been created, since, after all, it doesn't have any memory and so it doesn't know to behave as if it had just been created or if it had been around more millions of years.

What is unclear from your question, though, is why the lead decay product from the uranium that had decayed before forming the molten mixture with the zircon would not also be in this mixture. But taking for granted that the mixture consists solely of uranium and zircon initially, you can use the half life of uranium to tell the age of the object.

It's probably better to talk about a number $N_{0}$ of uranium nuculei travelling through space after getting created in the supernova. Once you do this, it should be pretty obvious that the amount left is going to be very close to $N = N_{0}2^{-t/t_{h}}$, where $t_{h}$ is the half-life. The key point is that the whole planet will be made from the same, approximately mixed, cloud, so the ratios of the atomic isotopes should be relatively constant across the planet at the time of formation.

Also, note that the half-life of U-238 is 4.5 billion years. There have only been a little more than three U-238 half lives since the beginning of the universe. So, even if you assumed (incorrectly) that all of the initial Uranium supply was made in the big bang, we'd still have 1/8 of the initial amount today.

To answer what seems to be your primary question first:

Is that clock reset because of external electromagnetic reasons the moment the nucleus becomes part of the crystal ?

No, the uranium atom's "internal clock" is not reset. To understand this, let's go back and correct one misunderstanding earlier in your question:

does one uranium nucleus start the radioactive decaying process the instant it is born inside a supernova ?

We use the word 'lifetime' for both, but nuclei are not like people. Don't be misled by the comparison.

But a 60 million year old uranium nucleus is exactly the same as a 16 million year old nucleus, or indeed a 16 seconds old nucleus. It does not age. The probability of its decaying is the same as it always was, and always will be. It does not have an internal clock - or, if you like, that clock is getting reset, not just just when it enters a crystal but continuously.

When talking about single Uranium atom, one atom can bleed out its instability at this point and it's neighbor atom would after billions of years. We don't know it's reason. The atomic clock you're talking about is also based on macroscopic amount of substance. The probabilistic behavior of atoms inside a macroscopic heap is periodic making the clock tick (See SI definition of Second).

Not the answer you're looking for? Browse other questions tagged cosmology nuclear-physics physical-chemistry radiometry or ask your own question.

0
What is the relation between the half-time and the line-width of a radioactive nucleus?
9
Does the population of higher level s-shells affect the decay rate of alpha emitters?
8
Can a half life be given in electron volts?
0
Why is $(N,N' G)$ reaction not listed?
3
What happens to molecules when a neutron is captured?
1
If we need the term/concept of "isotope", or why we call them "elements" of the periodic table
0
What is the physical basis behind the half life of nuclear decay?
5
Is there any simple way to predict beta decay half lives?