How would you connect a destination to a wormhole from your starting point to travel through it?

When you are thinking about wormholes you are probably picturing something like this: 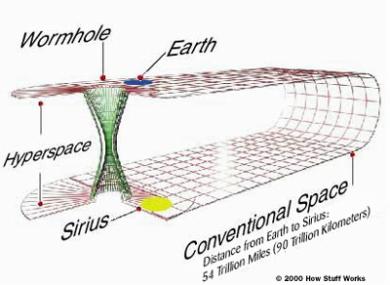 The problem is that the best theory of gravity we have, general relativity, can only tell us about half of this image.

General relativity is a local theory that relates the local curvature of spacetime to the local stress-energy tensor. There are lots of wormhole solutions known in GR, of which my favourite is the one described by Matt Visser (see also Negative Energy and Wormholes) because this is closest to the type of wormholes in all those Sci-Fi books I read as a teenager. Assuming you can lay your hands on the required exotic matter (which almost certainly doesn't exist, but let us ignore this trifling objection) you can build a wormhole just by arranging the exotic matter along the edges of a cube.

The trouble is that GR only tells us that the local geometry will look like a wormhole. It doesn't, and can't, tell us anything about the global geometry. Referring back to the diagram above, GR tells us what the left side of the diagram looks like but can not tell us anything about the right hand side. So GR tells us that the wormhole must connect somewhere, but it doesn't tell us where. Even if we could build a Visser wormhole we couldn't predict in advance where the other end would be.

The conventionally accepted theory of gravity, General Relativity, does not permit the formation of wormholes (or any other topology change), even if we suppose exotic matter to exist. The wormholes would have to be preexisting.

As Morris and Thorne suggested in their landmark paper back in 1988, submicroscopic wormholes would have to be mined from the quantum foam (i.e. the quantum vacuum state of space). These would then have to be expanded to macroscopic size, presumably by exposure to exotic radiation.

Once you have a macroscopic wormhole, you would have to drag one of its mouths to the desired location.

Not the answer you're looking for? Browse other questions tagged faster-than-light wormholes interstellar-travel or ask your own question.

1
Does teleportation through a stable traversable wormhole break any known laws of physics?
24
Building a wormhole
7
Negative Energy and Wormholes
3
How does conservation work in wormholes?
2
Do wormholes only allow FTL travel in “folded” spacetime?