Can't virtual images be put on a screen?

Apparently the plane mirror makes virtual images, and virtual images cannot be projected onto a screen. If you look below, it is? 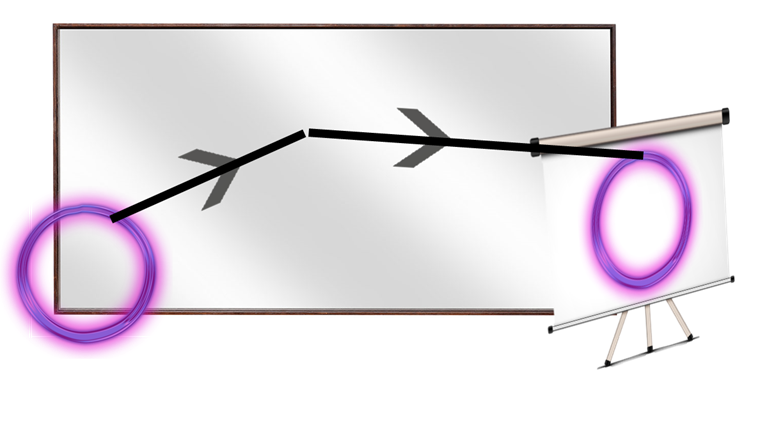 If the eye is basically a screen of rods and cones, then everything is a real image?

I'm guessing I'm wrong, but how?

Part of the confusion may be that, in your proposed experiment, there are two object-->optical element-->image processes going on. In the first, a plane mirror forms a virtual image of a real object. As explained well by others, this means that there are rays of light reflecting from the mirror that appear, (by assuming straight-line geometry) to come from an object behind the mirror. This image is virtual; the rays never actually get there; the mirror could be mounted on the face of a granite cliff! So we have a virtual image.

Now, you look "in" the mirror, and begin to process those rays of light. As far as you are concerned, the rays are coming from a real object; that's what a virtual image does! So the lens in your eye forms a real image on the retina of your eye, and the rods and cones start to send electrical signals to your brain

The light from the object has to fall on the screen after converging so that we can see the image on the screen.

When light coming from a distant object is converged to a point or spot on a screen by using a convex lens we see the image on the screen because light actually have fallen on the screen from the object after passing through the lens.

You can now think for mirrors..

To understand this you must first be very clear on the difference between real and virtual images. Light leaving on actual, physical object is dispersing---the light energy from each point on the object's surface is heading off in many different directions.

A image is formed when light appears to be dispersing from a different spot. This can happen either because the dispersing light from the original was brought back together again and passes through the focal point and disperse from there, or because the rays were simply rearranged so that their apparent origin lies in a new place. The former case is a real image, the latter a virtual one.

Only in the real case do you have light coming together so that you can project a bright spot on a screen.

You put the screen in front of the mirror, right?

If so, that's because the reflected light isn't strong enough. Very few photons are enough for our eyes to perceive them, but not enough for generate images on the screen (yet another reflection for us to see).

Not the answer you're looking for? Browse other questions tagged visible-light geometric-optics or ask your own question.

42
Virtual vs Real image
35
Why can you see virtual images?

2
How does the eye perceive a real image?
4
Why do we need screen to see real images?
9
If I reflect light from a projector using a mirror, then is the reflected image real or virtual?
1
Virtual image on screen
1
Shape of a virtual image
1
How do we distinguish virtual images?
1
How to think about virtual images?