What determines the speed required to pull a table cloth?

I was watching this show "Street Genius" on National Geographic and the host Tim Shaw demonstrated an experiment about Inertia, What he did was, He tied one end of a table cloth to a car through a long rope and started driving the car, when the rope was taut, the cloth was pulled and the things on the table were still on the table. What are the calculations involved in it and what determines the speed required to pull the table cloth without disturbing the things on it?

Not sure anyone will look back at this, but I'd like to give an answer anyway!

How do you not disturb the dishes when pulling a tablecloth out from under them? You're exactly right: this is about the inertia of the dishes and the forces on the dishes from the table cloth while the cloth is being pulled.

To have a small area under the curve, then we want a small amount of time that the dish is contacting the table cloth (t*) and also a small effective friction force (the initial slope). So either pull fast or use a slippery table cloth.

The effective friction force is a tricky thing to predict, since the dish will surely rattle around and only be in contact part of the time. In fact, predictions about even simple friction coefficients are nearly impossible without just doing the experiment (see citation). 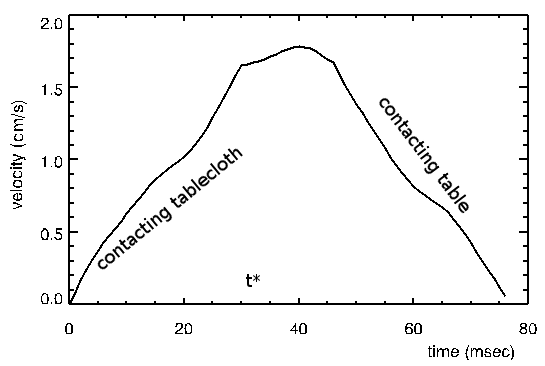 Not the answer you're looking for? Browse other questions tagged newtonian-mechanics friction home-experiment inertia or ask your own question.