How come that an Infinite universe will collapse under gravity?

In this PSE post the issue is about the stability of an infinite universe under Newtonian gravity.
Here I'will drop the Newtonian constraint because we know of the finite speed of interactions and I ask :
How can someone explain the existence of a gravitational collapse ?

In the drawing the universe is isodense and infinite and it will extend outside of the limits of the screen ;)
The grayed spherical regions represent the observed universe in relation to the points A,B,C (that can be considered as centers of the universe) and the three points are causally disconected because it is impossible that the interactions had time to propagate from A to B , ... to the entire universe.
You can imagine a similar region around the point X that can see both A and B.

Because nowhere exists a gravitational gradient, whatever the density, there is no chance of motion whatever the selected point. IMO.

How can someone explain the existence of a gravitational collapse ? 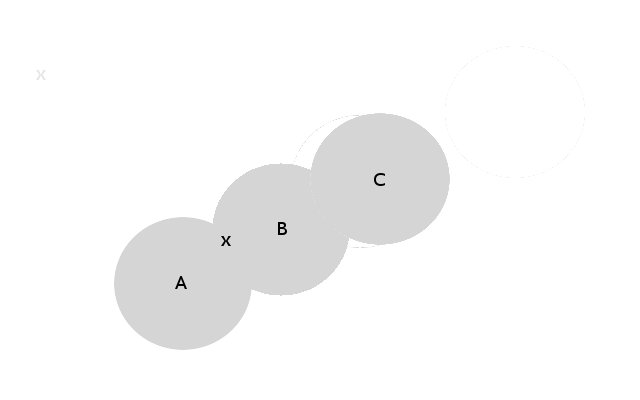 Also in simple terms. In a universe that is infinite with a uniform distribution of dark matter you are always in the center of that distribution. Gravity in a spherical shell, if you work it out, always goes to zero inside a spherical shell. This is why gravity in the earth doesn't go to infinity. Approaching the earth gravity increases with distance by 1/r^2. However, when we reach the earth and pass through the outer spherical shell of matter, the gravity from that shell now cancels. The volume of that matter decreases as a function of r^3. The result after you do the math is a linear decrease in gravity till it goes to zero in the center of the earth. An infinite universe of evenly distributed matter with no defined center contributes zero gravity everywhere because you are always in the center of a sphere. This might make us question if such an infinity can truly exist.

Now let us acknowledge that in an infinite universe with time lag of information the observer is exactly in the center of sphere for their information. If they move the center of their sphere of observation moves with them. This would suggest zero gravity contribution. On the other hand, can we statistically assume an even distribution of anything when there is a chance in said universe that density might not be perfectly distributed? Perturbations in density then lead to further disturbance in gravity cancellation.

Not the answer you're looking for? Browse other questions tagged general-relativity observable-universe cosmology or ask your own question.

19
Anti-gravity in an infinite lattice of point masses
2
Does the second law of thermodynamics take into consideration of attractive interactions between particles?
1
Is Newtonian gravity consistent with an infinite universe?

3
Is it possible to learn about an event that occurred outside of your observable universe?
2
If the Big Bang started in a state of low entropy then shouldn't the Big Crunch be in a state of low entropy also?
17
Ambiguity in applying Newton's shell theorem in an infinite homogeneous universe
1
If dark matter can't clump together, then where was it when the observable universe was much smaller at the beginning of the universe?