I recently asked this question When do stars become red giants? and am now wondering when the star's core is contracting after it has fused $H$ to $He$ what force stops the contraction just before it becomes a red giant?

The answer depends upon the mass of the star.

For stars of less than 2 solar masses, electron degeneracy pressure stops the collapse.

For more massive stars, helium fusion begins which stops collapse, without a degenerate state being reached.

Nothing stops the core contraction until He ignition takes place!

Yes, the core is partly supported by electron degeneracy, this slows the contraction and allows a relatively stable period of shell H-burning, but the central density continues to rise and the core contracts until He is actually ignited. This is especially true where there is a high degree of degeneracy. The mass of the core increases as more He ash accumulates from the H-burning shell above; the core shrinks further because, for an object supported by a degenerate equation of state, the more massive it is, the smaller it has to be. It is the core contraction and relocation of the H-burning shell to hotter temperatures that causes the increase in luminosity characterizing the ascent of the giant branch.

Here is a diagram of the central density vs central temperature for stars of 1.3 and 2.1$M_{\odot}$ leaving the main sequence and igniting He in their cores - at point A for the lower-mass star, which undergoes a helium flash. The main sequence is to the bottom-left of the diagram. The diagram is from a thesis by Gautschy (2012). The two green lines mark first (left) where partial degeneracy is felt in the core, then on the right (only reached by the lower mass stars) where a high level of degeneracy is reached.

Note that the central density monotonically increases from the main sequence until He is ignited (the star is already a red giant at this point). 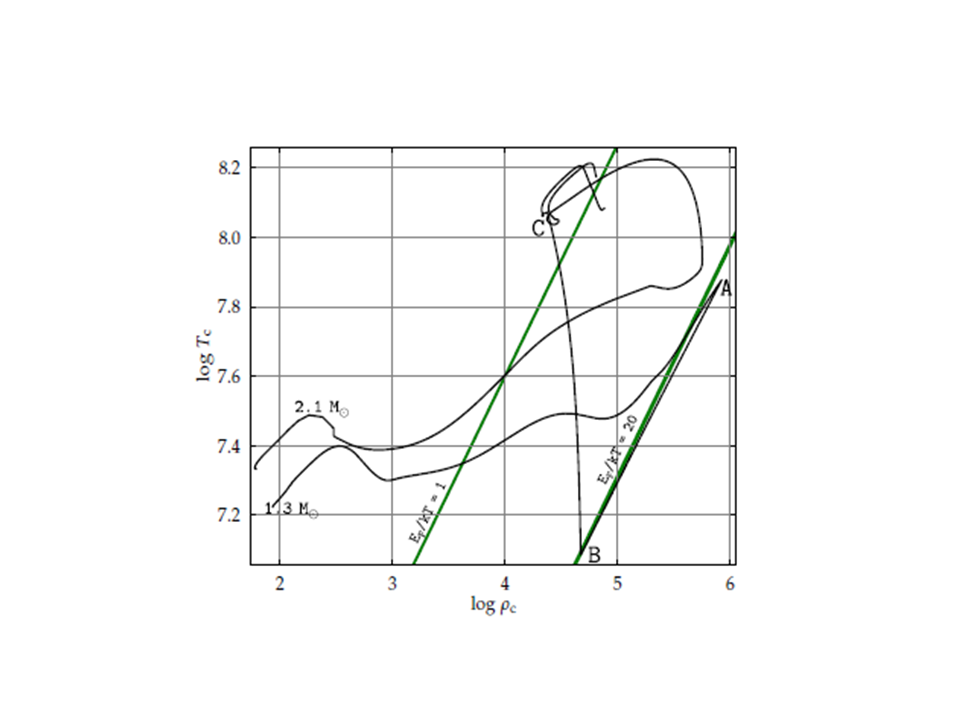 It can't be true that electron degeneracy halts the core contraction (except in stars with $M<0.5M_{\odot}$). If that were the case, the core could cool and yet still support the star and He burning would never take place - leading to the formation of a He white dwarf.

8
What causes the dimensions of a star increase when its hydrogen fuel is exhausted?
1
Why the He core gets hotter and hotter? Is it because it shrinks?
2
When do stars become red giants?

6
Earth-Moon orbiting each other after being engulfed by Red Giant
2
When do stars become red giants?
8
Why doesn't a star's core cool down when it expands as a red giant?
2
Why does the core of a low mass star contract after reaching electron degeneracy?
0
Red Giant Core Contration: How does it change the star's radius?
2
If I add more mass to a red giant, will it become a supergiant?
3
Evolution of red dwarf stars