Why can colors be mixed? [duplicate]

We can combine colored light, creating other colors, at least in terms of visual perception.

But how it the result physically "a different color" - if it is at all?

Or is all this not a physical question to begin with - but only about our eye and brain?

To have an example, we

It is not central to the question whether it is exactly matching the white light - but certainly interesting to understan whether it could perfectly match, and why.

A "normal, healthy" human eye has two types of light-sensitive cells in the retina: rods ("color blind", but capable of sensing low light levels) and cones: cells that are sensitive to different bands. See this figure for their relative sensitivity (from http://hyperphysics.phy-astr.gsu.edu/hbase/vision/colcon.html)

When you look at a spectrum of light, you can think of the eye's response as the result of the integral of $\int{I(\lambda)* sensitivity(\lambda)*d\lambda}$ for each of the three types of cones. It should be immediately obvious that different spectra (i.e. different "colors") can be perceived as being "the same" because of this way of processing the light. It gets further complicated because some people may be missing one or more types of cones ("color blind") so their perception of some colors may be different altogether.

The above is the reason that making "good white light" is hard. If you start with a bright (hot) incandescent source, you will be illuminating an object with every wavelength in the visible spectrum; but fluorescent lights (and LEDs) tend to create light in "bands". Thus, your perception of some colors will be different depending on the light source used. This is usually reflected in something called the "color rendering index" of the light source - where "100" represents perfect rendering, and lower numbers are indicative of a "lumpy" spectrum. The eye might still see this as "white" (because the source light excites the three types of cones evenly), but other "colors" may not show up very well since they do not in fact get illuminated.

An example of the different spectra is given at http://www.ledsmagazine.com/content/dam/leds/migrated/objects/features/10/2/11/Avnet_Fig2T_22513.jpg 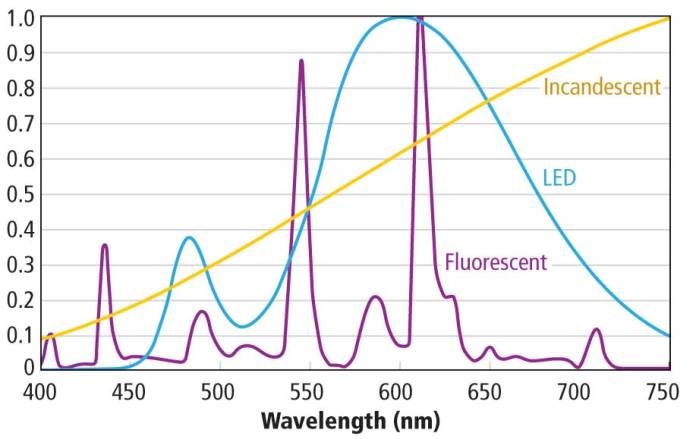 You can see that a typical incandescent lamp is biased towards red (because the filament is not as hot as the sun - this is why digital cameras do "white balance correction" and they usually have a "tungsten filament" setting). By contrast, a fluorescent lamp tends to have several distinct peaks in the emission spectrum - these are the emission peaks of the phosphors used to convert the UV light emitted in the gas of the tube into visible light. Finally, modern white LED technology is reaching a point where quite a wide range of excitation wavelengths are present, leading to higher color rendering fidelity.

So the answer to your question is really - it's in the eye, not the brain.

The cells in our retina that detect by frequency (read: colour) detect most strongly in three slightly different bands we know as Red, Green and Blue.

To make a slight correction I would say an incadescent bulb is quite far from white, so I would rather proceed talking about sunlight on a clear day. The reason why sunlight appears as white as say a white flashlight made of RGB LEDs is because light from both sources stimulate all your RGB retinal cells similarly and more importantly in similar proportion.

To put into perspective, an incandescent bulb is very similar to sunlight in the RGB distribution by proportion (see blackbody curve), except that there is heavier contribution in the frequencies we associate with the color Red. Candle light is similar.

Daylight fluorescents are much more white, but upon closer inspection, these actually produce more Blue in comparison to R/G. Another thing to note with non blackbody light sources like these is that they cheat by having almost no light output in frequencies other than R G or B. Your eyes can't tell the difference because all RGB cells are stimulated, which is exactly what happens when natural light hits those cells.

None of these lights would look the same to a honey bee, which have 4 types of cone cells in their eyes. That extra cell dedicated to UV could very well be what allows a bee to very easily distinguish sunlight from reconstituted RGB light coming from LED flashlights.

In my answer to this question: (What is the sun's spectral series?), I give a very detailed answer about why mixing colours of light produces other colours and how it is purely a result of biology and evolution. I also delve a bit into the structure of the human eye and why, in fact, only three colours are necessary to reproduce all of the colours we can see. It touches on much of what Floris has written, but it has more pictures and is written slightly more for a layman explanation.

Not the answer you're looking for? Browse other questions tagged optics visible-light photons vision perception or ask your own question.

11
Colors from a computer vs. colors from visible spectrum of sunlight
0
How do RGB colors work?
0
how does different colour wavelength intefere?
2
Is white a single color?
4
What is the sun's spectral series?
6
White LEDs and colour perception
0
Does any substance possess the property color?
0
Are there multiple ways to create the same color?

8
How photons represent colors that you see?
0
Are there multiple ways to create the same color?
3
Mechanism for visible light frequency mixing in storm clouds
1
Colors of the Earth from space, an “average” of particular emitters?
3
Why will a blue torch make a green object appear black?