How do car headlights work?

The two lights cover different areas of the drivers view.

If there are other cars near, it's important do not aim the light to the eyes of other drivers (or their mirrors). But Also, it's important to cover as much of the street ahead as possible.
One bulb, together with the surrounding reflector of very specific shape, aims the light to the street up to a certain line, and not at all above it, where other drivers eyes are.
The other one just shines lots of light ahead, for situations where you can be sure nobody is irritated.

The more interesting part in terms of physics is how whe mirror works, at least in some cases:
The reflector, that surrounds both bulbs, is shaped in a way such that boths bulbs share part of the reflective area to cover different ranges of angles.
This is done by covering part of the bulbs, together with a rather complex shape of the reflector, (which was derived by trial and error in simulation, I suppose).

When deciding where to put the separation between lit street, and protecting eyes of drivers - the upper edge of the covered range of the first light - there is a problem: The suspension of the wheels is more or less compressed, depending on load. If the load at the rear end of the car gets increased, the car will tilt up at the front. It's just a few degree at most, barely noticable, but makes a huge difference in terms of where the upper edge of the light ends up.
Because the separation is important to get right - both sides are relevant to safity - there is a mechanism to tilt the lights itself up and down by the driver.

Concave mirror are used as a reflector in cars head light because the concave mirror behind the lamp reflect the light in straight forward to front side and the driver see the object clearly.

The following diagram may explain the role of the second mirror: 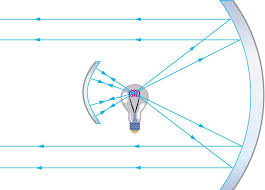 5
How would a sound mirror work?
3
Is it possible to save the light?
0
On parabolic concave mirror in car flashlights
0
Can we see everything?
0
LED headlight illusion
5
How do car sunshades work?
3
Do curved displays flip their images?
1
How do we distinguish virtual images?
1
What will be the effect on the image formed by a mirascope if spherical mirrors are used instead of parabolic mirrors?