What is an intuitive explanation using forces for the equatorial bulge?

The earth is not a sphere, because it bulges at the equator.

I tried fiddling with centripetal force equations and gravity, but I couldn't derive why this bulge occurs.

(a) a mathematical explanation using forces (not energies) and

(b) a simple intuitive explanation to explain to others why the bulge occurs?

Equatorial bulging of a planet is caused by the combination of gravity and centrifugal force. To show this I will first make a few assumptions:

A small volume, $dV$, experiences two volumetric accelerations, namely gravitational and centrifugal, and normal forces by the neighboring liquid in therms pressure. The sum of all accelerations on $dV$ should add up to zero to comply with the second assumption (the centrifugal acceleration already accounts for the fact that the reference frame is rotating). At any point on the surface there is a constant pressure, because above it there would be the vacuum of space. This means that the neighboring liquid, also at the surface, has the same pressure and therefore can not exert any force on each other in the plane op the surface. The only direction that liquid can exert force on each other is in the normal direction to the surface. However the sum of all accelerations still should add up to zero and therefore the sum of the gravitational and centrifugal acceleration should also point in the normal direction of the surface.

where $\phi$ is equal to $\pi/2$ minus the latitude; its direction is always parallel to the plane of the equator and its line of action always goes through the axis of rotation. These accelerations are illustrated in the figure below. 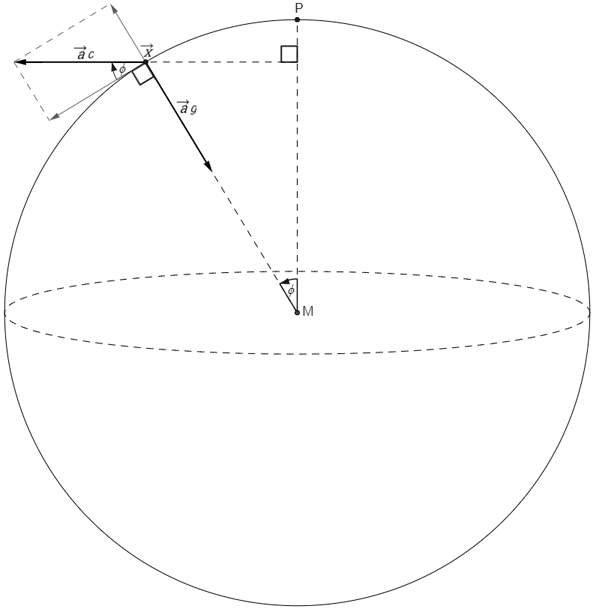 For the next part I will define local unit vectors $\vec{e}_r$ and $\vec{e}_t$, where $\vec{e}_r$ points into the local radial outwards direction and $\vec{e}_t$ is perpendicular to it, lies in the plane spanned by the axis of rotation and $\vec{x}$ and faces the direction closest to the equator. The direction of vectors also correspond with the grey vectors in the figure above. Using these unit vectors, the vector sum of the gravitational and centrifugal acceleration can be written as

If there would be no bulging then the normal vector should always point radial outwards. However the normal vector has to point in the opposite direction as the equation above, which means that for $\omega>0$ it will not point in the same direction as $-\vec{e}_r$ for all values of $\phi$. This means that the surface will have a small slope, $\alpha$, relative to $\vec{e}_t$

A slope means a change of height, and thus radius, when displacing horizontally. To simplify the expression, $r$ will substitute $\|\vec{x}\|$. For a slope $\alpha$ the change of the radius, $dr$, for a small change in $\phi$, $d\phi$, will be equal to:

When $\phi$ is equal to $0$ or $\frac{\pi}{2}$, the poles and the equator respectively, this equation will be zero, however for any value in between, it will be positive, since when denominator would become negative it would mean that the centrifugal force will be bigger than gravity and the liquid would be flung into space. So this planet would have the smallest radius near the poles after which the radius will increase with $\phi$ until you reach the equator.

There is a wikipedia article which describes the effect http://en.wikipedia.org/wiki/Equatorial_bulge

Basically the bulge is caused by the rotation of the Earth. The centripetal force is given by $F=m\omega^2 r$. Therefore the poles feel a lesser force than the equator which wants to spin out into a disc. This is balanced by gravity which wants the Earth to be spherical.

If you have ever seen a pizza being made by hand, you will know that when the baker throws the disk of dough in the air, he makes it spin. As he does so, the pizza "disk" gets bigger because the dough on the outside experiences a larger centrifugal force (in the rotating frame of reference of the pizza. Don't start on "there is no such thing", you asked for an intuitive answer).

Now think of the earth as that pizza. The bits of the earth near the equator (a larger distance from the axis of rotation) feel a greater force, and are therefore trying to move outward. The force of gravity tries to pull it back. The balance is a slightly distorted sphere: the "bulge".

Not the answer you're looking for? Browse other questions tagged newtonian-mechanics newtonian-gravity rotational-dynamics centrifugal-force or ask your own question.

1
Does gravity play a role in the Earth's equatorial bulge?
0
Why is the Earth not an exact sphere and what makes it bulge at the equator?
66
Why is the Earth so fat?
3
How the apparent weight varies due to the rotational motion of Earth?
9
rotational oblateness