Recently I watched a documentary about Io, a moon around Jupiter. Io has volcanic activity even though it is small and can't retain heat well because gravity from Jupiter and a nearby moon cause it to sort of speed up from the opposing gravitational pulls, causing heat, when they are all lined up.

Is it because the scale factor of the distances and sizes are different? If so what scale factors would be needed to produce this affect? 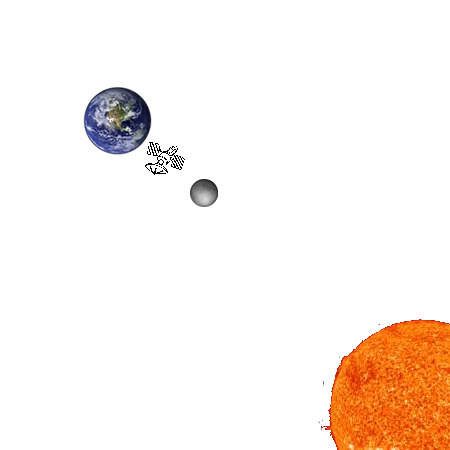 The simple answer: Satellites do feel this force, but obviously don't get ripped apart. The tidal forces are simply too small (for the satellites' materials) to actually rip them apart.

The Why: Tidal forces happen because one side of an object feels such a larger huge difference in force than the other side. The magnitude of the force not only has to deal with the size of things pulling on each other, but the distance. Even massive things (like the sun or jupiter) have relatively little pull when very far away. If you get close, you feel the effects of them much more strongly and the effects increase more quickly!

Due to the fact that Io is a moon very close to other large bodies, this makes the difference of the force of gravity on one side is VERY different than that on the other. (Try plugging in correct values for Io, Jupiter, and the distance between them; then try calculating the force of jupiter on Io as seen from one side of Io to the other.)

This being said, if a man-made satellite were to be in the same situation as Io, either being very large or being very close to other big things, it could get ripped to shreds.

In short: It's all about what forces are being applied. Distant objects apply small forces, close objects apply bigger forces. Tidal forces happen when gravity changes wildly between your head and your feet.

Not the answer you're looking for? Browse other questions tagged thermodynamics gravity space satellites or ask your own question.

6
Where's earths death bulge, destroying everything in it's path?
4
How gravitation affects tides
1
If there's no atmosphere in space shielding from particles, why is not dangerous for spaceships/humans?
6
Given finite speed of gravity, why didn't Earth fell into the Sun already?
5
Why aren't there more natural satellites orbiting the Earth than just the Moon?
60
Why is the Moon considered the major cause of tides, even though it is weaker than the Sun?
2
Friction and satellites
2
Why doesn't the Earth's temperature increase in the perihelion?