Why isn't black hole information loss this easy (am I missing something basic)?

Ok, so on Science channel was a special about Hawking/Susskind debating black holes, which can somehow remove information from the universe.

A) In stars, fusion converts 4 hydrogen into 1 helium, with a small fraction of the mass being converted to energy.

This happens all the time, and nobody is that amazed about it anymore. So, I have to assume that science is ok with the idea of fusion happening, and so, converting matter into energy doesn't destroy the information of the matter.

Let's take that as Assuption 1:
** 1: Converting matter to energy is OK.

B) In empty space, quantum fluctuations of the energy levels are presumed to allow "pair creation" where a particle and its anti-particle can be created out of the really tiny amounts of energy that exist in empty space. For quantum fluctutations, if I understand it, the uncertaincy principle actually dictates that the amount of energy can fluctuate, allowing a pair to be created even if there "shouldn't be enough energy", because the amount of energy in a small space is uncertain.

Anyways, ignoring the fact that I'm fuzzy on all the requirements for pair creation -- it is generally accepted as part of quantum physics that it can happen.

So, again, I have to assume that science is ok with the idea of pair creation. And so, converting energy into matter, must also not destroy the information value of the energy, and that information value must remain even after the 2 particles annihilate and go back to being energy.

But if one or both of the particles moves away from the black hole, and somehow escapes, that can cause the energy to leave the black hole. This is assumed to be a very unlikely event, but still within possibility.

Anyways, that's my (very rough) understanding of Hawking's theory on how black holes can loose mass over time, when in theory "nothing can escape a black hole". Let's assume Hawking's correct...

If a black hole continues to loose mass over cosmic time, it will eventually disappear, and the problem is stated that when it vanishes: All of the information which the black hole had formerly consumned, will be lost.

Which contradicts the Law of Conservation of Information. At least, that's how the Science channel presented it.

** Every time the black hole looses mass, it's through the processes of energy->matter, or matter->energy->matter, involved in pair creation. Based on assumptions 1, 2 + 3 above, none of these should violate the Law of Conservation of Information. It seems that the very slow process of loosing mass, should also be a very slow process of "leaking" information back into the rest of the universe.

By my understanding: By the time the black hole vanishes, it's OK -- because all of it's information should also have leaked back into the rest of the universe, and no information will be lost.

OK, so please tell me why this is wrong. It seems intuituve to me, but really smart people have spent years looking into this. So, am I missing something?

ps. Also, if my statement of fusion, pair creation, and/or hawking radition is wrong -- BUT NOT IN A WAY THAT MATERIALLY AFFECTS THE QUESITON -- please overlook that and just focus on the question.

Hawking thought - and could "rigorously" deduce from semiclassical gravity - that the information has to be lost because it can't get out of the black hole interior once it gets there. 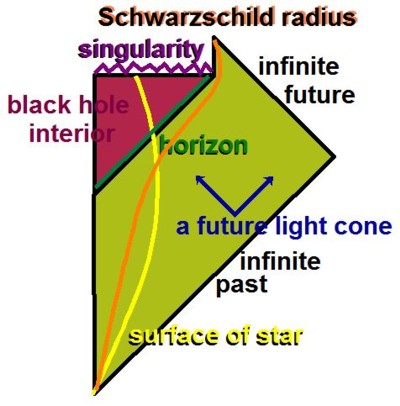 To see why, look at this "Penrose causal diagram" that may be derived for a black hole solution. Diagonal lines at 45 degrees are trajectories of light, more vertical lines are time-like (trajectories of massive objects), more horizontal lines are space-like.

If you look e.g. at the yellow surface of the star (its world line), you see that it ultimately penetrates through the green event horizon into the purple black hole interior. Once the object - and the information it carries - is inside, it can no longer escape outside (don't forget: time is going up), into the light green region, because it would have to move along spacelike trajectories.

So the information carried by the star that collapsed to the black hole inevitably ends at the violet horizontal singularity and it may never be seen in a completely different region outside the black hole.

The information loss of course depends on the detailed geometry of the black hole that is not shared by a helium nucleus, so it shouldn't be surprised that helium nuclei and black holes have different properties.

As we know today, the information is allowed to "tunnel" along spacelike trajectories a little bit in quantum gravity (i.e. string/M-theory). This process is weak but this weak "non-local process" allows the information to be preserved.

Not the answer you're looking for? Browse other questions tagged black-holes hawking-radiation information or ask your own question.

18
Why is information “lost” when it got into a black hole?