Calculating the mass of a wave of water

I am assuming it is possible to calculate the mass of water if the volume is known. My assumption is that doing this for stagnant water, in a container perhaps, is easy.

However I want calculate, approximately, for a wave of water at sea.

What kind of information would I need if I wanted to calculate the mass or volume of a wave of water?

For example, if I know the space from one wave crest to the next and the period could I use that information?

So again how would I calculate the mass of a wave of water?

There has to be a few assumptions. Let's assume we are talking about a linear plane wave in relatively deep water. Because the the case where the bottom comes into play the upward hydrostatic force distorts the wave. Picking deep water or insuring the relative depth of d to L (d is average water depth and L is the wavelength of the wave) is $d/L > 0.5$. Compare the deep water case to the shallow water case and the particle motion in each condition (SWL is standing or still water level) is shown by the circles or ovals:

When a wave propagates from deep water offshore in to shallower water near-shore the wave length decreases, but at a slower rate than that at which the depth decreases. This shift to higher frequency also deforms the wave. The bottom is applying force on the wave which also lifts it up above the SWL until it becomes unstable and breaks.

Since in your comments you mention you're looking for momentum (not really mass), we have to talk about what that means in a wave. In fluid flow problems, some analyses are best carried out by energy considerations (e.g., head loss along a length of pipe) and some by momentum considerations (e.g., force exerted by a water jet hitting a wall). Similarly, for waves it is better to consider the flux of momentum for some problem analyses. For wave analyses, the flux of momentum is commonly referred to as the wave "radiation stress" which may be defined as "the excess flow of momentum due to the presence of waves" (Longuet-Higgins and Stewart, 1964).

The analysis of the momentum is based on the particle motion shown above and the computation is well illustrated on the wiki page for momentum flux including the boundary conditions. (Note that in this derivation gravity is defined as negative downwards). The end result for deep water waves is a momentum flux of

Where $\rho$ is the water density, g is gravity and A is the height of the wave (middle to crest).

As an aside about breaking waves they are very different conditions.

In the case of a breaking wave the common profile is shown below (not a sawtooth wave). 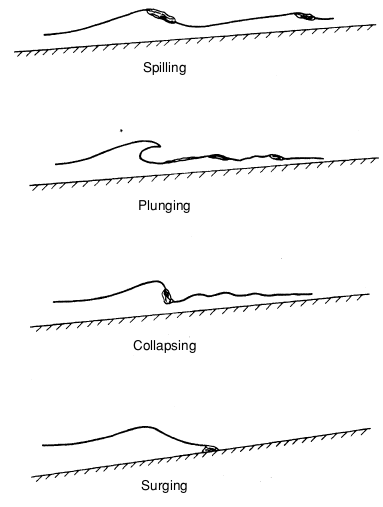 Since it's the momentum of the wave that you are after, here's a good way to estimate its mass:

On the open ocean: Waves are approximately sinusoidal in shape. Take a trough - the lowest point for a wave - as the base. Estimate the height of the wave and perform an integral to estimate the cross-sectional area of a wave. Then multiply this by the approximate length of either the wave or the section of the wave you are interested in (try for the latter because ocean waves can be very long). Now that you have its volume, multiply by the density, ~$1000kg/m^3$. Voila! You have an estimated mass.

Close to shore: This is a bit trickier, waves close to shore are more of a sawtooth shape and they can end up, well, wave-shaped (the semi-arc that we all see surfers on). You can ask around on Math.SE probably for how to estimate the area of that shape, but still you only have to multiply by the length of the wave you want and then by the density. Probably easy to treat the wave as a wall of water if you want a tsunami of something of that sort.

In pretty much all cases, the bottom of the wave can be assumed to be the lowest trough. What you'll find in the end is that a lot of mass is in a wave.

Under the assumptions of linear wave theory, there is no net transport of mass, but there is a net transport or energy and momentum. Because you are asking about sea waves, I believe these are appropriate assumptions for your question. For example, it would be the sort of analysis to perform to estimate the horizontal forces a wave train (e.g. tsunami) would impart on a body (a boat) floating in the water.

Some basic fluid mechanics and calculus is required to solve even simple cases, but you can find a fairly complete walk-through (for plane-waves at least) here: Wave Momentum Flux .

Not the answer you're looking for? Browse other questions tagged waves water geophysics classical-mechanics or ask your own question.

31
Why do tsunami waves begin with the water flowing away from shore?
2
Calculating temperature of water in the freezer
0
How much water is transported as a shallow water wave travels into a sea cave?
3
Why and how are wave sets (groups) created?
0
Calculating the rate of pressure increase in a water-filled boiler
1
Calculating change in period in terms of ellipticity
6
Can you fall, through air bubbles, in water
0
Enthalpy of vaporization of water and specific heat of water differences