How use the Higgs branching ratio plot to extract information about the Higgs mass compared to experiment?

What does the plot of higgs branching ratio (see figure below) say about the higgs mass anyway? How can one use it as a guide to find the higgs mass experimentally?

If we e.g. go to $M_H=126$ GeV (in figure below) and then read off the different branching ratio: then if experiment agrees with this, it would mean that the higgs mass is $126$ GeV? 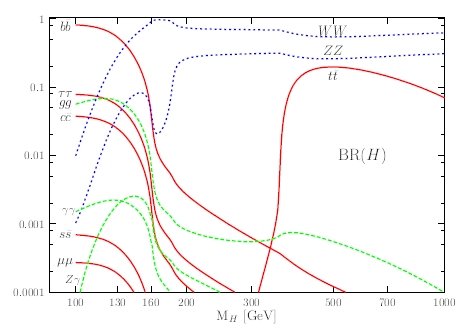 In other words, what's so special about this plot?

First, to be clear on what the graph is showing: as a function of the possible mass of the Higgs, it plots the fraction of Higgs bosons that will decay via each individual channel.

Before we knew the mass of the Higgs boson, a plot like this one was useful for identifying the best channels to look at to detect the Higgs in various mass ranges. For example, it tells us that if the Higgs is more massive than about $160-180\text{ GeV}$, it usually decays to $WW$ or $ZZ$ boson pairs, so the experiments had better be prepared to detect $WW$ and $ZZ$ events. Or if the Higgs is less than $130\text{ GeV}$, it usually decays to $b\bar{b}$, so the detectors had better be prepared to detect that.

What this plot doesn't tell you is the backgrounds to each channel - that is, other processes that are expected to produce the same final set of particles but don't involve a Higgs boson. For example, a quark and antiquark from a proton could interact and produce a virtual $Z$ boson which decays into a $b\bar{b}$ pair. This would be considered a background to the Higgs $b\bar{b}$ channel. As you can imagine, a channel that has large backgrounds (that is, many other processes that will produce the same final particles) will not be particularly good for searching for the Higgs boson. Some of the channels that have large Higgs branching ratios also have very large backgrounds - the $gg$ channel, for instance - so it's not particularly important for the detectors to look for them. Conversely, some channels that have small branching ratios (i.e. a Higgs rarely decays that way) are still useful for the Higgs search because they have small backgrounds (i.e. very little else produces that kind of event). The $\gamma\gamma$ channel is one of these.

After you have a candidate mass for the Higgs boson, you can take a vertical slice of this graph and pick out the branching ratios for various channels. Then you can compare those branching ratios to what you've actually detected. If they match, it's a good sign you've found the standard model Higgs boson. Of course, when doing that there are more precise plots that physicists will usually rely on.

18
Shape of the Higgs branching ratio to ZZ
14
115 GeV, 170 GeV, and the non-commutative standard model
5
Width of the decay of Higgs boson into dimuon
7
What crossed over at the electroweak crossover?
1
Reading the y value of the Branching fraction diagram for Higgs boson decay modes
2
Branching fractions for the 125 GeV Higgs boson
2
Why is there an upper mass limit of $300$ GeV of the Higgs boson for $W/Z$ associated production and t$\bar{\mathrm{t}}$H associated production modes?
2
How to estimate the experimental acceptance of a particle as a function of its life-time?