Why does pitch in a helicopter take effect 90 degrees later?

In a helicopter if you want to give it a forward pitch, you change the angle of the blades when it is in this position ---- 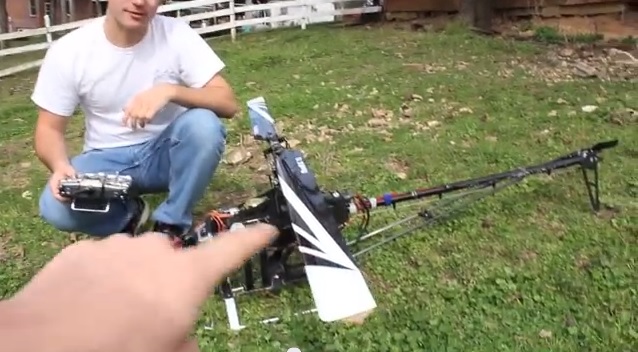 So the two blades experience unequal lift and because o gyroscopic precession the helicopter pitches forward (instead of pitching sideways, which is intuitively expected)

Up till this it's clear to me.

But what I dont understand is, why does this motion have to take effect 90 degrees later when the orientation of the wings is like this --- 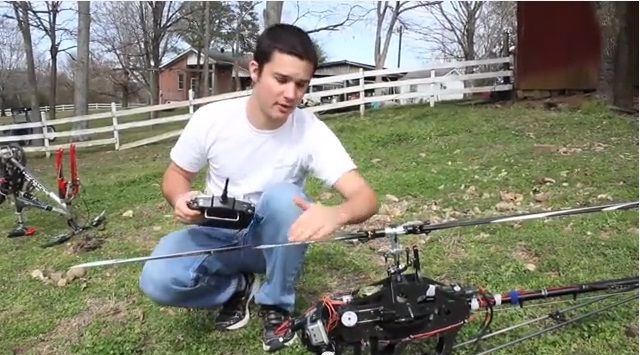 I got these images from the helicopter physics videos of smarter every day. Please watch this video to understand my question better.

It says that if the helicopter wants to pitch forward, it changes the angle of the blades 90 degrees before. And gyroscopic precession takes place. But it also says that the effect takes place 90 degrees later. That I do not understand. The effect should take place immediately.

If you turn an electric fan on, on a table, and throw a ping pong ball past it, you see the air push the ping pong ball to a different direction than you threw.

You throw it one direction, it gets pushed another direction, and it ends up going to a combination of the two directions. Physicists call this vector addition because both the speeds AND directions seem to get added together.

Imagine helicopter blades spinning so fast that they become a blur. It looks like a disc and is referred to by helicopter pilots as the rotor disc.

The Vs stand for "Velocity", which is a name for speed when you include a direction. F is for the "Force" of our push.

(1.) Is a top down view of a counterclockwise rotor disc, like the Robinson R44. (1.) is to help orient us to this 2-dimentional picture of our 3-dimentional world.

(2.) Is a side angle view of the same rotor disc, with a force pushing up on the side closest to us. This force causes the disc to change to (3.)

(3.) Shows that although the disc didn't turn the direction most of us expected, the part of disc we pushed changed direction exactly like the ping pong ball would have. It was going one direction, it got pushed another direction, and it ends up going to a combination of the two. Notice V2 and V4 did not change direction. V2 is still going away from us and V4 is still coming toward us. V1 was going right, it was pushed up, and it ends up going up and to the right. Because the center of the rotor disc is attached to a drive shaft, pushing up on our side causes the other side to be pushed down, and the direction of V3 changes downward.

I made the picture with MS Paint and I'm hoping for more reputation so I can add links and comments, so hopefully it was helpful : )

ABOUT THE OTHER ANSWERS: user10851's answer is correct, but anyone who isn't familiar with physics (and doesn't have awesome spatial awareness) won't understand it. Also, his answer basically says that it happens because the cross product tells it to, which isn't very helpful. NeuroFuzzy and HelloGoodbye are incorrect.

ABOUT HELICOPTERS and My Credibility: I have a US FAA Rotorcraft-Helicopter Private Pilots License and just over 100 hours flight time in small helicopters. I'm also an Electrical Engineer who tutored physics and calculus at my university. Helicopters have four controls that are related to their motion, but you often only use three. The collective increases the pitch (a.k.a. angle of attack) of all blades throughout their entire rotation, letting you change the total vertical force, adding or reducing lift. The anti-torque pedals change the pitch of the tail rotor blades (all blades change together like the collective), allowing you to turn the nose left or right. The throttle controls the fuel flow to the engine and is often linked to the collective through a "correlator" so that it doesn't need to be used. And lastly, the cyclic, the object of our discussion. The cyclic adjusts the pitch of the blades predominently at one point in their rotation so that the force is greatest there. It does this through a genius mechanism called a swashplate. When using the cyclic, the pitch of each blade changes smoothly like a sine wave as it goes through each 360 degree rotation. Each blade is only at its highest pitch when it is 90 degrees behind the direction the pilot is pushing the cyclic (as the OP mentions). If we called this position 0 degrees, the pitch descreases as the blade moves to the 180 degrees position, and then begins increasing again, reaching max pitch when the blade has gone full 360. Almost like flapping your wings. Fully articulated rotor systems are said to flap, feather, lead, and lag. The FAA has an awesome free pdf about flying helicopters you can get here @ faa.gov/regulations_policies/handbooks_manuals/aviation/helicopter_flying_handbook/

As @NeuroFuzzy pointed out, since the blade will rotate with that pitch for 180 degrees before you change the pitch again, the average position in which the upward forces act during those 180 degrees will be behind axis of rotation, not to the left of it, which only is where the force acts in the beginning of those 180 degrees.

Both cases are the same.

Let's assign some axes. Say $z$ points up through the helicopter, $y$ forward, and $x$ to the right. And let's agree that the blades are spinning counterclockwise when seen from above. That is, the angular frequency $\vec{\omega}$ and angular momentum $\vec{L}$ of the blades are initially both in the $+z$-direction, and the helicopter is hovering motionless.

As for where/when the effect takes place, there is something of a subtlety. Certainly any impulse on the blade will be transmitted instantly in time throughout the body (or at least at the sound speed inside the material). But the effect of that impulse is mostly to alter the trajectory of the blade. The faster the blade is spinning the further the vertical apex of the new trajectory is carried toward $90^\circ$ downstream. The thing about helicopters that trips up intuition is the fact that blade angles alter forces directly but not displacements.

Not the answer you're looking for? Browse other questions tagged classical-mechanics rotational-dynamics gyroscopes or ask your own question.

13
Why was the Stark effect discovered much later than the Zeeman effect?
3
Why does Uranus not experience gyroscopic effect?
0
Gyroscope precession torque
3
How does a gyrocompass in a moving craft sense the Earth's rotation?
0
Gyroscopic Effect at non-90 degree offsets
0
Why does this aircraft gyroscope has two degrees of freedom?