What is the pressure at the top of a sealed tube being drawn out of water?

Is the atmospheric pressure in a closed container the same as that of the surroundings (1 bar at sea level)?

Consider a tube with both ends open with one end dipped into water (like a pipette in chem lab). Now if we close the other end with a thumb and draw it out of the water, the water level in the tube will be higher than the surrounding water level.

If we say it is because the atmosphere that pushes up on the water in the tube is same as that of remaining air in tube pushing down on the water, won't the water fall out due to its own weight as the upward and downward pressure is balanced? I would like an explanation of the whole process which compares the weight of the water with up and down pressure by the atmosphere.

Lets define some variables first. Lets say that the length of the column of air that you trap in the tube between the water level and your thumb is $h_0$ and it is initially at the same pressure as the surrounding air which we will call $P_0$. Lets also define the cross-sectional area of the tube to be $A$. As you draw the tube out of the water, the water level in the tube will rise above the surrounding water level, and the pressure at the bottom of this column of water will be given by $$ P_0=P_t+\rho g h_w, $$ where $P_t$ is the pressure of the volume of air trapped by your thumb, $\rho$ is the mass density of the water, $g$ is the gravitational acceleration at the surface of the Earth, and $h_w$ is the height difference between the water in the tube and the surrounding water. The second term on the right hand side is a standard equation from fluid statics. You can see from this already that the pressure can not be the same at the top of the tube anymore, as you suspected. 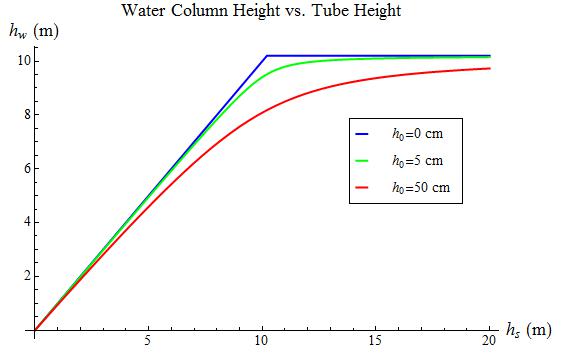 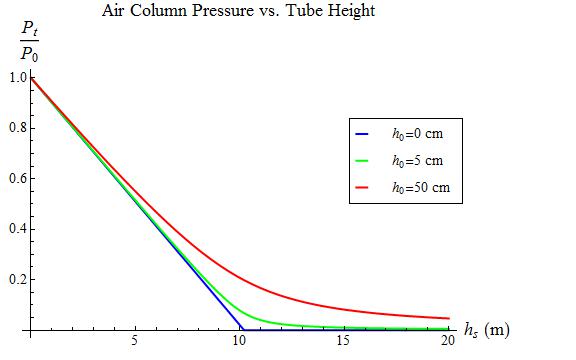 Not the answer you're looking for? Browse other questions tagged soft-question pressure or ask your own question.

5
Physics of the inverted bottle dispenser
5
Home experiment question
0
Would an airtight box filled with air act the same way to 1 bar of water pressure as the same box vacuum-sealed at atmospheric pressure?
2
Pressure at ground level and at sea level
0
Concept regarding Barometer
0
Water pressure distribution up an undersea tube
0
Water column's pressure canceling out problem and it's microscopic point of view
0
Pressure at the opening of tube in Siphon