As I understand it, black holes have an absolute event horizon and an apparent horizon specific an observer. In addition to black holes, an apparent horizon can come from any sustained acceleration. Firstly, there is the "particle horizon" of the universe, which is the furthest co-moving distance from which light can reach us before the acceleration of the expansion of the universe prohibits it, then there is the case of a constantly accelerating observer in just regular flat space.

My zeroth question is if the Hawking radiation from a black hole could be said to come from the apparent or absolute horizon - which is it? Obviously the former would be specific to each observer.

For the case of the universal acceleration, dark energy, cosmological constant (please help me with terminology as appropriate): One could ask "do we observe radiation from the horizon?", for which we already have an available answer in the form of the cosmic microwave background (CMB). But I am curious if this would match the temperature and intensity you would expect if you treated the edge of the universe as a black hole horizon. Are these two be equivocal in some sense?

Finally, I'm most interested to ask what would occur for the case of a constantly accelerating observer. An apparent horizon exists behind the observer beyond which light may never reach. Could it be possible the Hawking radiation is observed as coming from behind? 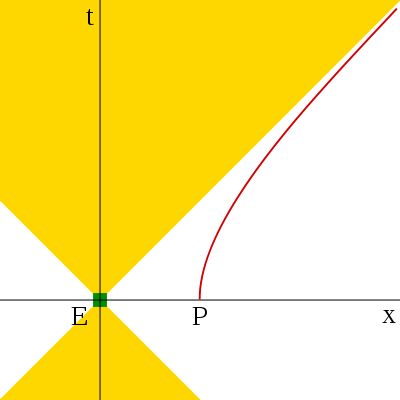 Could P possibly observe Hawking radiation coming from behind?

Granted, if you took the simple version of the temperature of the Hawking radiation ($T = \frac{\hbar c^3}{8 \pi G M k_B}$) and plugged in some super large mass, you will correspondingly get some super small temperature which will not agree with the 2.7 K of the CMB. Of course, the two cases I'm discussing do not have any definable mass that can be used. I would imagine that in the case of a simply accelerating particle, a greater acceleration would correspond with greater Hawking radiation, which is why it's not an issue for normal stuff, but if we accelerated something small with great force, could it observe radiation from that (false) event horizon?

Yes, P will observe a thermal radiation that is locally identical to the Hawking radiation and it is called the Unruh radiation. Its temperature is $a/2\pi$ in the $\hbar=c=k_B=1$ units.

A few more words about the relationship of Unruh and Hawking radiation.

Unruh found his derivation after Hawking found his - even though Unruh's radiation is kind of simpler and more elementary. This anomaly shows that Hawking didn't have any problems with doing more complicated calculations than others.

Also, the magic of the black hole background is that the killing vector field $\partial/\partial t$ where $t$ is the ordinary Schwarzschild time coordinate has the character of a "non-accelerating" observer at infinity (away from the black hole) but near the horizon, it is severely accelerating (not to fall to the black hole).

The latter fact means that in this reference frame, the observer sitting above a black hole horizon (by using his jets) will see the what looks like the Unruh radiation, but because his $t$ coordinate is continuously interpolated to the "static time" at infinity, this radiation will become real at infinity.

It's important to realize that a star without an event horizon doesn't emit any Hawking radiation. The boundary conditions at the star surface are completely different than at the event horizon. In the case of a star, we can't argue that a "freely falling" observer will see a nice local empty vacuum - because a freely falling observer gets killed when he collides with the star's surface.

Finally, let's mention that OP's original picture - a way of dividing the Minkowski space by an event horizon for an accelerating observer - is known as the Rindler space:

The event horizon for the observer is observer-dependent and is also known as the Rindler horizon.

The apparent and particle horizons are mathematical artifacts that come about when you consider one object traveling at a fixed speed vs another that's traveling at an increasing speed. For example, if you're trying to run (fairly fixed speed) to catch up to someone on a bike, you'd better be pretty close to them while they're first starting (accelerating). You can catch up at first, but if they get a chance to get up to speed a little, then you'll never catch up. These two situations (can catch up / can't catch up) are on two sides of the "bike horizon". The usual meaning of "event horizon" is in the context of a black hole. There the horizon is a very local effect, and it exists in a very specific place (very different). An accelerating observer won't see the horizon in a different place. If the horizon moved from the perspective of an observer, then you'd start getting contradictions between different observers. Namely, one person could see particles being emitted from a "lower horizon" that's below where someone else sees the horizon. However, the other person must also see those particles (they're there, after all), but would see them coming through their "higher horizon" (Hawking radiation is emitted from just above the black hole's horizon, nothing passes through).

Not the answer you're looking for? Browse other questions tagged hawking-radiation event-horizon or ask your own question.