We had a lecture on the Coriolis effect today and I am very very confused, this is the first time I've heard of it as such. Anyway, I know that Coriolis acceleration is calculated by $\vec{a} = -2 \vec{\omega} \times \vec{v}$ where $\vert \vec{\omega} \times \vec{v}\vert = \omega v \sin\theta$. This gives $a = -2\omega v \sin \theta$. If I am given a latitude of say, 40°, how do I calculate the Coriolis acceleration of a moving object such as a bus in different directions like due south or due east?

So for example, when you're at the north pole and shoot an arrow horizontally to the earth's surface, $\theta$ is 90 degrees and since $sin(90)=1$, the coriolis acceleration is $a=-2\omega v$. 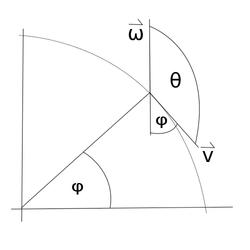 So at the end you simply have $$a =- 2\omega v \sin \phi$$ which tells you the magnitude of the Coriolis force at a given latitude. When have a bus traveling at 50 km/h at latitude of 40° then this acceleration is a small fraction of the gravitational acceleration.

When you want to know in which direction the force is pointing, you have to consider the cross-product again: when you're traveling from the north to the south (like in the picture), then $\vec \omega \times \vec v$ points into the screen and $-\vec \omega \times \vec v$ out of the screen, so a bus traveling south would be accelerated to the west. When you travel from the east to the west, then the resultant vector points to the north. Or simply put: on the northern hemisphere the Coriolis force deflects always to the right.

For a more intuitive approach why the Coriolis force points to the north when traveling west, see the answer to this question.

(Note that I considered only motion parallel to the earths surface. If you want to drop a ball from a tower it's a bit different.)

In principle yes. However, if you do it, then you will get an angular velocity which is slightly lower than the value you get from websites like this. This has to do with the difference between the sidereal and solar day, but I won't go into any details here. (And I think if you only need the first 2 digits it doesn't matter. ^^)

$\hat{e}_{r}$ := unit vector normal to the surface of the Earth at the point of longitude

Not the answer you're looking for? Browse other questions tagged coriolis-effect or ask your own question.

1
Magnitude of Coriolis force given an east-west velocity