What's the difference between Raman scattering and second harmonic generation in crystal?

As for second harmonic generation, the pump waves with frequency w go through the crystal creating waves with 2w. I've searched information from internet and there are all explained this phenomenon by math methods, but I want to know exactly the physical model that what's happening in the crystal which create second harmonic. Is it the same as Raman scattering (incident waves interact with molecular vibrations)?

There are several ways to look at these two effects. Their mechanisms are very similar, but their experimental realizations are rather distinct from one another.

Warm up - linear transmission: For practice, and to set the stage, lets first consider simple transmission of light through a solid. (I'll focus on solids as an example.) A light wave of frequency $f$ is present in the crystal. The electrons in the crystal are initially "stationary", by which I mean that the electron density is not changing with time. The electrons respond to the wave, and "slosh" in sync with the light, both in time and space, resulting in a polarization wave. (There could be a phase shift between the light wave and the polarization wave. We'll ignore that.) The polarization wave acts as a source of a new electromagnetic wave at the same frequence $f$. The new wave interferes with the original wave. This is the mechanism of linear transmission. It can explain the reduced wavelength of the light in the medium, and various other phenomena like reflection and refraction. It explains all the "linear" effects, where the frequency of the light doesn't change.

Second harmonic generation (SHG): Things start the same as linear transmission. The EM wave in the solid induces a polarization wave oscillating at $f$. But now we can go one step further (second order) and recognize that the original wave is now in the presence not of a stationary electron density, but one that is oscillating at $f$. The EM wave interacts with the oscillating charge distribution, resulting in beating at the sum and difference frequencies, $2f$ and $0$. The polarization wave at $2f$ generates an EM wave at $2f$: the second harmonic. The $0f$ component also exists, but is usually of no interest.

Before moving on to the Raman effect, we need an aside on the structure of solids (same applies to molecules). A simple model of a solid (or molecule) has fixed ions producig a potential where the electrons live. A model one step closer to reality allows the ions to move, and we have phonons (vibrations in a molecule), but we don't allow the electrons and phonons to interact: they are uncoupled. One step further allows electron-phonon interactions. In this model we can have infrared absorption: an incident EM wave causes a polarization wave at $f$ as usual. But now, due to electron-phonon interaction, the sloshing electrons drag the ions along a little bit. If the frequency $f$ matches a vibration frequency (and perhaps a few other conditions), that phonon (vibration mode) will be excited: energy moves from the EM wave to the vibration mode. This happens at frequencies much lower than visible light frequecies. In the infrared.

Now the Raman effect: The incident light at $f$ causes an electron polarization at $f$. But we've allowed electron-phonon interactions. Vibration modes are also causing an oscillating polarization, this one at the phonon (vibration) frequency, $\Omega$. As before, the electrons are experiencing two sources of oscillation, and the result is beat frequencies at $f-\Omega$ and $f + \Omega$, and new EM waves are generated at those frequencies. The former is called the Stokes frequency, and is what is ususally observed in Raman scattering. The second is called the anti-Stokes frequency, and it can be observed, also. But now we have a problem. The Stokes frequency is always observed. Even if there was no vibrational excitation in the first place to cause the polarization at $\Omega$, light at $f-\Omega$ is observed. How can that be?

This is where we have to reach out just slightly to quantum mechanics. Each phonon (vibration mode) has a zero point energy. They vibrations are never truly at rest. There is always some vibration in every mode. It is the zero-point vibrations that couple to the electrons, causing a polarization at $\Omega$ and ultimately new light at $f-\Omega$.

There is a lot more to the complete story. There is a stimulated Raman effect, and other effects, and there is a discussion to be had concerning the coherence properties of the light. And, of course, there is the quantum mechanical picture.

One physically intuitive model for thinking about light-matter interactions is in terms of an energy level picture. In this picture, light propagating through a material can be thought of as series of absorptions and emissions. In one of these cycles the material absorbs a photon, which will excite the material into a virtual state (i.e. not a true energy state of the material). Since this state is virtual it will almost immediately decay back down into a real state emitting a photon in the process.

Below is an image which shows 3 different situations. The Rayleigh scattering does not change the energy of the light because the decay is back into the original state. Raman scattering though will decay into a different state (the different energy levels due vibrational modes of the molecules) with the difference in the energy resulting in a change in color/frequency of the scattered light. 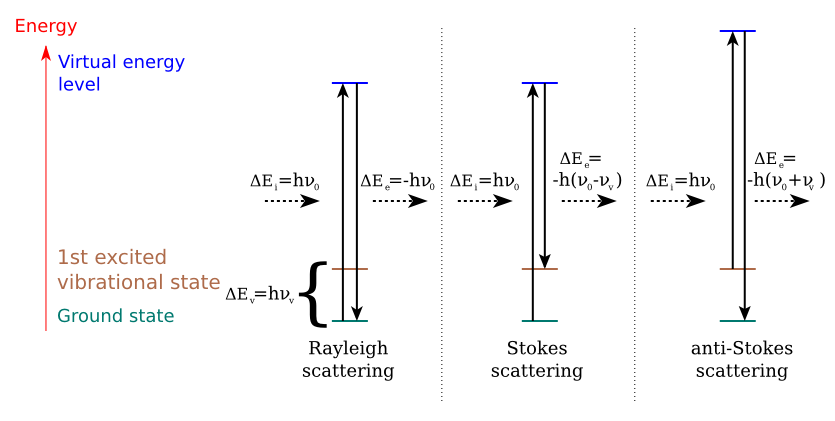 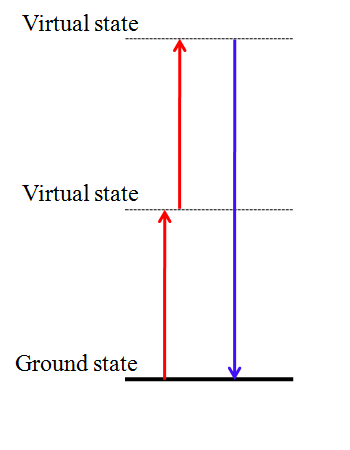 The basic analogy to consider is that SHG is like full-wave rectification in electronics, whereas Raman scattering is like FM radio modulation. While Punk_Physicist gave an energy-level diagram that is helpful, you may also be interested in a purely classical/mechanical picture of the process.

Picture of a molecule

Think of a molecule as a pair of charges $q$ and $-q$ attached by a spring (covalent bonds), like so:

If the bond is harmonic, then Hooke's law is valid, and $\mu\propto\mathbf{E}$. Thus, the macroscopic polarization caused by millions of these "molecules" is going to be a field linear in $\mathbf{E}$. Remember that for later.

Now that you have that microscopic picture of molecules, let's recall some macroscopic E&M, and try to connect the two pictures together.

So now we have a visual connection between our "spring-molecule" and the induced field $\mathbf{D}(\mathbf{E})$. How does the quadratic term give rise to SHG?

second harmonic generation is a non-linear optic effect, this mean that is the dielectric polarization of the crystal responds non-linearly to the electric field of the light -in this case laser pulses.the photons emitted by the laser (monochromatic light) interact with the non-linear media (crystal), and because of the constructed properties of crystals the refractive index depends on the polarization and propagation of the light. and Because of the refractive index of the crystal there will be phase matching which will be present as a new photon with twice the energy. Raman scattering on the other hand is the observation of the inelastic scattering of photons -let's say in a gas- caused by energy transitions of the gas molecules. source - wikipedia

Not the answer you're looking for? Browse other questions tagged optics non-linear-optics raman-spectroscopy or ask your own question.