I made a simple bulb-battery circuit and then I cut one of the wires and attached both ends to cemented floor, the bulb didn't glow, this means cemented floor is a poor conductor of electricity. Then how does earthing work ? This idea of activity came from when I got a shock being barefoot but got no shock from same source with slippers on.

So,
How can electrons pass through insulator like cemented floor during earthing ?

Earthing something means dumping the electron flow into the earth. Since the earth is so big, it can absorbe/give a practically infinite amount of charge without changing potential, this means that you can treat earth as a reservoir of ready to use electrons.

If you plug the phase of your home power line into the ground (without safety devices in the middle), you are actually dumping the electrons in the earth. (In reality -since we use AC- you are repeatedly dumping and taking back electrons 50 times per second).

Note: the other wire of the power line that gets to your home is connected to earth at the nearest distribution node.

There are two kinds of "earth" being talked about here. There is:

For the "return path" earth of 1. there are several ways wherein this will work: 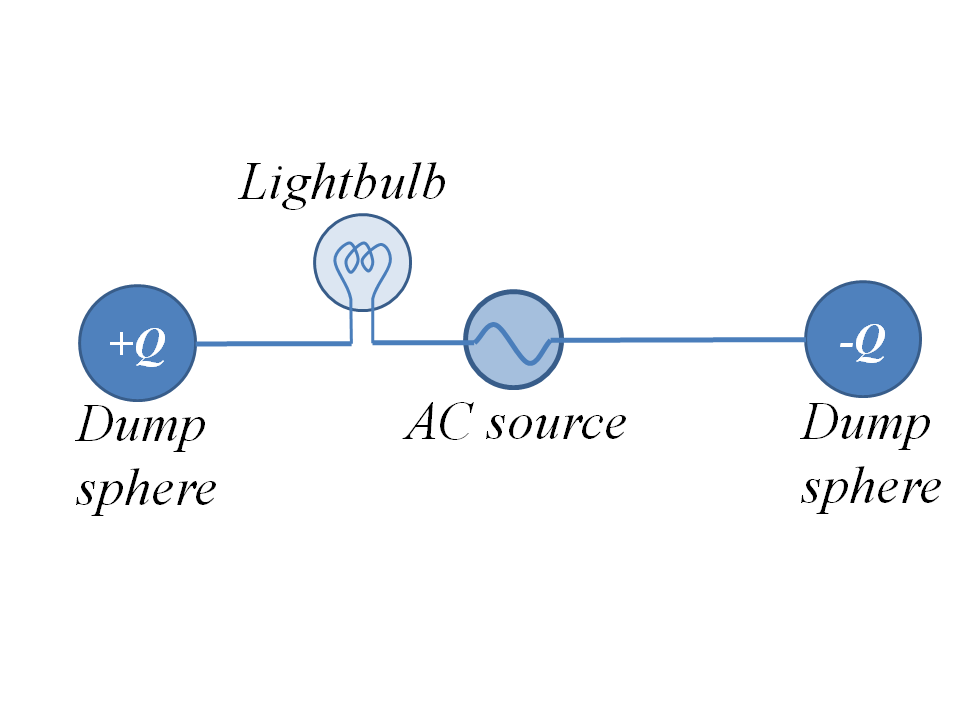 You can easily do the Gauss's law calculations for widely separated spheres to show that the voltage difference between them when one has been "pumped up" with positive charge $+Q$ and the other with negative charge $-Q$ in the way described by Kornut in his answer is:

There have been some really bizarre truly one-line power transmission systems thought of in the past, where the one line works as a waveguide and does not need a return path. See the Wiki Page for the Goubau Line for details.

Now to discuss the notion of protective earth. In home electricity supplies, one side of the supply ("the neutral") is "tethered" to the same potential as a protective earth circuit. This latter is simply a system of conductors, going through the third "Earth" pin on the socket outlet, that tethers any conducting surface of an electrical appliance to the one side of the supply. The other side of the supply is called the "active". If a fault happens in an appliance such that the active touches the conductive housing of an appliance (say of a toaster), we have a dangerous situation, since anyone touching the appliance can then get an electric shock. However, if the housing is connected to the protective earth circuit, there is a redundant path back to the supply's neutral. This leads to a high current in the redundant path and hopefully a blown fuse (the redundant protective earth path has a fuse in it that blows with a very low current).

A more modern and safer way to achieve this protection is earth leakage protection, which I talk about in this answer here.

Actually according to my opinion it give you a shock but it is negligible. If you give a high energy and try to make contact with earth it will neutralize by giving a little to you. The reason is, if there is a good conductor like body it goes through the body other than only earth.
Just take a lightning application and think of that.

19
How does a wire carry alternating current?
6
Earthing, neutral and Earth's conductivity
3
Calculating Electrical Shock 'Danger'
0
Graph profile of the voltage drop vs resistance across a resistor, and the physics behind electric potential difference
2
How does grounding (burying a terminal underground) complete a circuit?
1
Earthing vs grounding
9
Alternate explanation for energy flow in electricity as explained in this video