It makes no sense for a point mass to have 2 accelerations. What you might have done is find accelerations due to 2 forces separately. You can add them as when $m= \text{constant}$,

When using vectors symbol, its automatically takes care of their directions.

This is due to the superposition principle: when several forces act upon a body, the net force is the sum of the individual forces: $$\vec F_{net} = \sum \vec F_i $$ However, this is only true when the relation between the force and the acceleration is linear.

Counter-example: If you had an environment where the acceleration is proportional to the force squared then the superposition principle would not be true. Let's say that this quadratic relationship would be the case for the gravitational force, then the force on the third body would be (I'm just considering the x-component here):

This in turn means that in this case, the total acceleration which you get on the right hand side is not just $\vec a_1 + \vec a_2$.

While the other answer are all completely correct, I just want to write a more simplified answer.

Adding acceleration vectors works the same way as adding distance vectors. You add the corresponding components (x with x, y with y, etc. whatever coordinates you are using) and the magnitude and direction will work itself out.

Maybe an example can help. Consider the following system, where a mass m is acted upon by two accelrations. 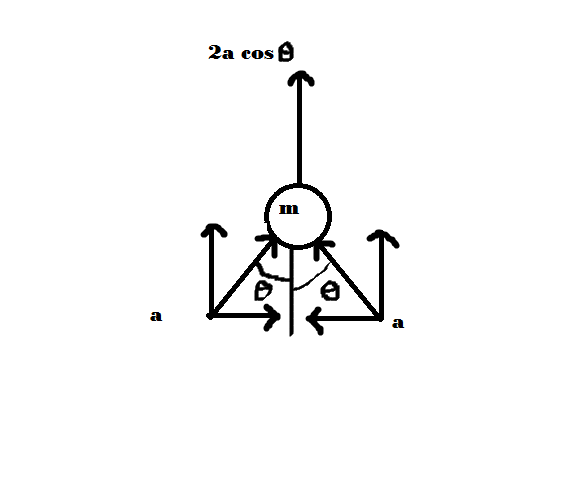 The vector resultant makes sure that the $a\sin \theta$ components are cancelled and the $a\cos \theta$ components are added up. The resultant gives the physically perceived view of motion of the object. A simpler answer would be that accelration is a physical quantity with a direction(i.e. a vector), and when you want to combine two accelrations, you calculate their vector resultant.

2
Kinematics with non constant acceleration
1
How an accelerated object sees another accelerated body in special relativity?
1
Acceleration in a system equal for every body -- why?
2
How to find pseudo-force on a body in a non-inertial reference frame with respect to another non-inertial reference frame?
5
Newton's second law for individual forces
2
Operational definitions in Newtonian Physics
3
Can we use relative motion if acceleration of two bodies are different?