Voltage across parallel combination on adding another resistance

Suppose we have a battery with terminal PD $V$ connected to an external resistor of resistance $R_1$. Now if another resistor say $R_2$ is added in parallel to $R_1$ , does the potential drop across $R_1$ change?

My thinking is that as the total resistance of the circuit $\frac{R_1 R_2}{R_1 + R_2} < R_1$ the current increases while keeping the voltage same($V=IR$). Is this true or does the potential difference also change? 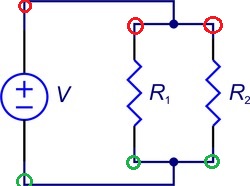 11
Why does voltage remains same over Parallel Circuit