Does interference take place only in waves parallel to each other?

The title says it all but I will add some details. I believe that interference takes place only in waves which are parallel to each other. See the picture to understand what I mean by parallel. 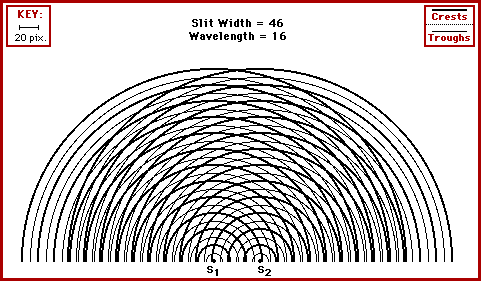 We see that in the double-slit experiment the waves are not parallel. Please answer accordingly as I have given both the situations.

Interference is really just a re-statement of the superposition principle; that is, given 2 waves, the resulting pattern is simply the sum of the two waves at all positions in the space.

The first figure you provide shows how, in 1D, 2 waves that are in the same phase (which you are calling 'parallel') will interfere constructively; i.e. the sum of the two waves has a larger magnitude than either wave individually. The second shows how two waves in opposite phase will interfere destructively, i.e. the sum of the waves has a smaller magnitude than either.

The phase difference for the first is $0^o$, and the second is $180^o$. Consider all the other values, for example, $30^o$. We can see the general behaviour from the sum+difference trig identities. For $\sin$, we have:

But we have a constant phase difference, so

which is independent of $u$, so for convenience create some constant $\eta$:

Switching to $\theta$, this leaves us with:

In 2D, you draw a triangle formed by each source and a chosen point on the 2D plane. We now have a 1D wave along each line from a source to the point. The phase difference between the two waves depends on the difference between the lengths of the two wave paths. This gives you, yes, a phase difference, and the waves will constructively or destructively interfere. Looking at your diagram, the bold lines are say the peaks, so where they cross will be peaks. Where the thin lines cross will be troughs. Where thin and thick lines meet will be zero, so a straight line connecting those can be all zero, the destructive interference of the 1D example.

The path difference, i.e. the greater or lesser distance travelled along a line from one source compared to the other looks like this: 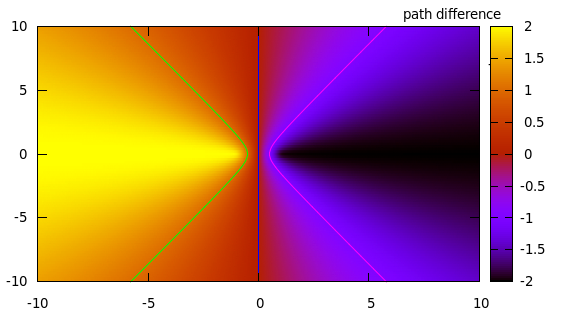 The contours are at $0$ and $\pm1$. As you can see, the path difference is zero (i.e. the locus) in a straight line along the centre. 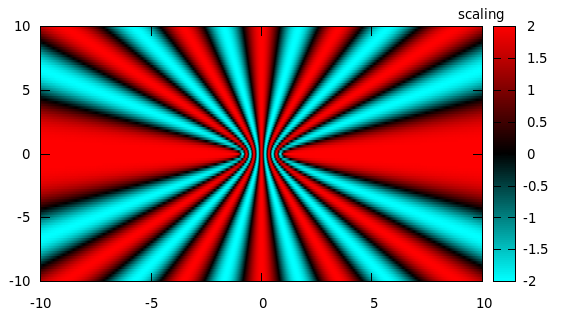 Hopefully you can see, then, that interference, both constructive and destructive, happens at all angles - not just along the 'parallel' line between the two sources.

Yes, the waves do interfere when they are not parallel. In fact, there's no such thing as parallel waves: their direction is always fuzzy.

See this image of one wave going through an aperture with size comparable to wavelength: 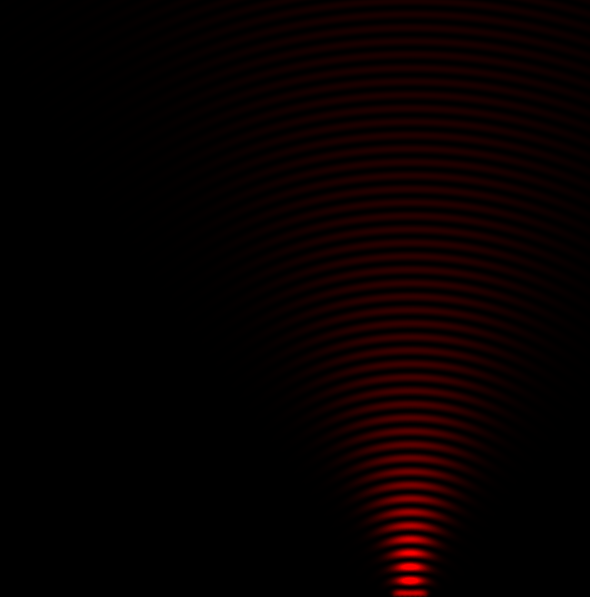 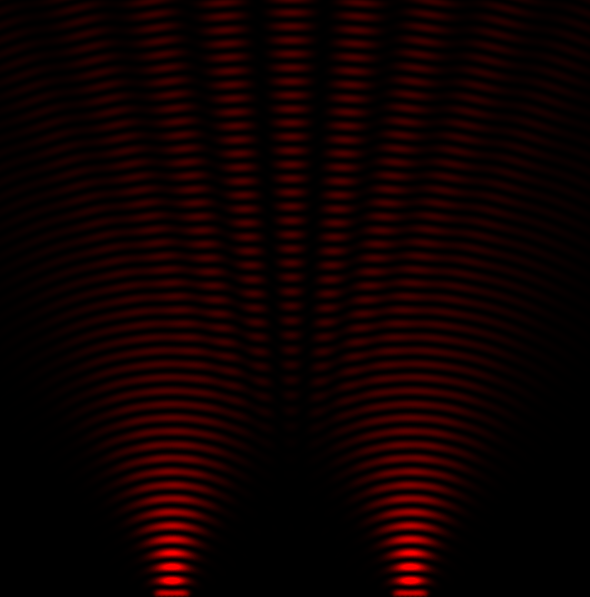 Interference is clearly visible only in the region where the waves cross, but not earlier (i.e. not lower in the image).

To make lack of parallelism even more apparent, I've tilted the sources to see that we still have interference: 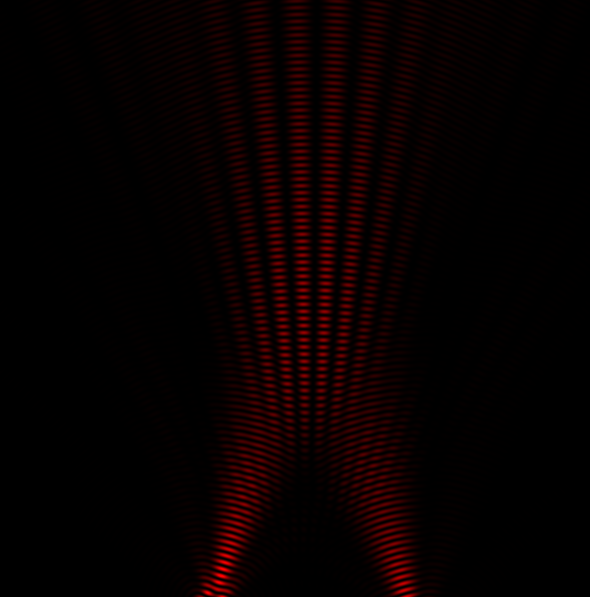 The waves in the first picture are not necessarily parallel. Their amplitudes are simply projected onto a screen, which makes them appear to propagate only in the $x$ direction, while really they could be propagating in any direction at all (still assuming they are confined to a plane, so no propagation in the '$z$' direction.

Without loss of generality we can assume that only one of the waves moves at an angle with respect to the plane of projection. This process of projection will the cause then give rise to a distortion of the wave, which will cause the perceived wavelength to be multiplied by a factor, I believe it should be $\cos\theta$.

Not the answer you're looking for? Browse other questions tagged waves double-slit-experiment interference or ask your own question.

4
Can interference occur between two waves that are parallel but separated by a small distance?