Is it possible to rotate an angle on perfectly smooth ice?

You must start and end with the same pose.

Prove it if you think you can't. 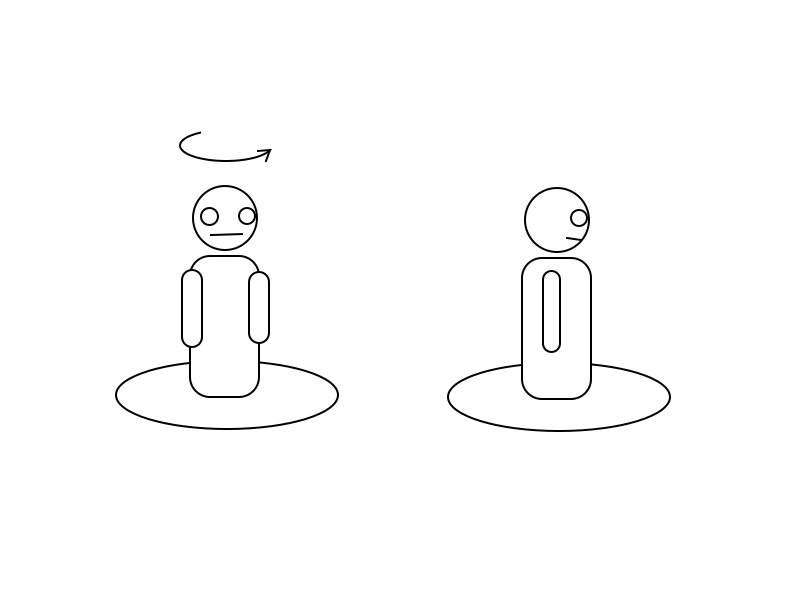 Yes, it is possible. This is an example of the cat-righting problem.

You simply must change your moment of inertia during the process.

Model your body as two cylinders of equal mass which can exert forces between each other to start spinning. The bottom cylinder has an adjustable radius, initially set equal to the top cylinder's.

When the two cylinders are lined up relative to each other, stop them both, and return the bottom cylinder to its original radius. The entire apparatus must have rotated because the top cylinder's angular frequency had only a one absolute value the entire time, but the bottom cylinder had two. They therefore had different total angular displacements, so the entire thing must have rotated.

71
Is there a way for an astronaut to rotate?
12
Can a deformable object “swim” in curved space-time?
3
Displacement with zero velocity
2
How does a tightrope walker return to equilibrium?

2
Finding the point of passing between two objects of different velocities
2
Does the position-time graph have to be a smooth function?
1
Rotation and value of the derivative of an angle
0
When are decays into quarks kinematically possible?
1
Accelerating to catch a moving object
3
Relativistic or non relativiistic mechanics?
1
Deriving smallest possible launching angle such target hits a point from geometrical envelope