Why longitudinal accoustic and optical branch have the same energy (and thus frequency)?

Question: At point $X$ the LO and LA branches have the same energy. Is this something that can be expected before doing the experiment or is it just it ? 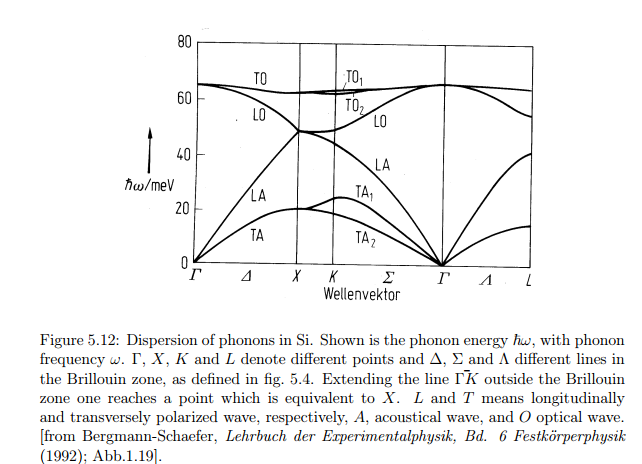 This is expected. For simplicity, consider a one dimensional lattice, with two atoms per unit cell, let's call them A and B. This misses some details of the three-dimensional Si structure, but it gets to the kernel of the argument.

First look at what is happening at the $\Gamma$ point. For the LO branch, each "molecule" in the lattice is vibrating in phase with all the others, in particular, with its nearest neighbor. Let me try to depict the displacements of the atoms in the first four unit cells.

Each symbol in this diagram represents displacements of each atom: first A: left. first B: right, second A left, second B right, and so on

The LA phonon at $\Gamma$ would be represented this way:

None of the bonds are displaced from their equilibrium length, so the energy of the LA mode at $\Gamma$ is zero, as shown in the dispersion relation.

Now lets look at what happens at the zone boundary. Here, the phases of the displacement of an atom is the negative of that of the nearest neighbors:

For the LO phonon at the $X$ point:

Look at the first unit cell. The first B and the second A move together, as do the second B and third A but in the opposite direction.

And the LA phonon at the $X$ point

Look at the first unit cell. The first A and the first B move together, as do the second A and second B but in the opposite direction.

The pattern of motion for the LA and LO phonons at $X$ are nearly the same!

Not exactly the same, because for clarity I've chosen a model where A and B are different, with inter-molecular spacing different that intra-molecular spacing. Things are different in silicon because all the species are the same, and the members of the unit cell don't line up one-dimensionally, but things work out very much like this model, and The pattern of motion for the LA and LO phonons at $X$ are exactly the same!

10
Positrons versus holes as positive charge carriers
1
Working with atomic (?) units in solid state physics
5
Higgs vs phonons
0
Why is copper a metal?
1
On the lattice structures of graphite
4
Different electrons, why aren't they all the same?
1
Is there any difference between Bravais lattice and primitive lattice?
0
what are 2D point groups with respect to a 2D lattice
3
Inversion applicable to three-dimensional lattices only
0
Why only the electrons around the Fermi energy gain energy when a material is heated?