Lorentz force, must there be two magnets? 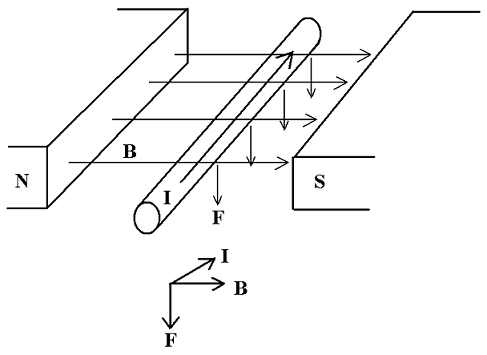 The diagram above demonstrates the Lorentz force, Yet I wonder... must there be two magnets/electromagnets? If the two magnets form a magnetic field of $1$ $Tesla$ acting on the wire, why not use 1 magnet and make the wire really really close to it. So that the gap would be 0. Will $B$ still be valid based on one magnet?

The magnetic field in that region of space( very close to the wire and thus the magnet ) can be treated as a uniform field( approximately ).

Now, the charges within the current carrying wire experience a Lorentz force given by

Let us see how

Also, you need not place the wire close to the magnet. You can place it at a considerable distance from the single magnet. In this case, you will have a non-uniform magnetic field in space. Nevertheless, a Lorentz force will continue to act on the charged particles within the current carrying wire( the magnetic force will vary from point to point ).

If you use single magnet and remove the other magnet in your experimental set up shown in figure of your question, the magnetic field B would not remain in the expected direction. In your case, using two magnets, you can have the direction of B perpendicular (approx) to the straight current carrying conductor (see the picture). 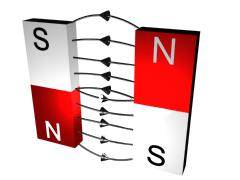 You can also use single magnet and keep it close to north or south pole so that magnetic field remains perpendicular to the straight conductor, as explained in the other answer, but there you are going change the placement of the magnet, thus area of the magnet facing the conductor decreases.

2
Lorentz force in homopolar motor
12
Could the Faraday's rotating wire experiment be explained without using Lorentz force?
0
Why will a 'Non-Electric Faraday Motor' which just uses permanent-magnets, not work?
1
What would the magnetic field of two (practically identical) static cylindrical permanent magnets stuck together (called compound magnets) look like?
1
Force between two magnets
0
Does stacking two magnets together increase the magnetic strength?
4
Why do bar magnets exert a force on each other?
0
Solenoids and Permanent magnets