Why does a cup with 100 g water float when placed on another cup with 50 g of water?

Now think about Archimedes law of flotation. It says that the weight of displaced liquid = weight of the floating object. However in this case the bottom cup has only 50 g of water. How can an object float without displacing water equal to its own weight? Am I not applying Archimedes principle correctly or because of both things beings of comparable size Archimedes principle does not apply?

There is a subtle reason; just because you have 50 g of water doesn't mean you can't effectively displace more than 50 g of water. This is probably best illustrated with a picture. Here's what the system looks like before Cup B is dropped in: 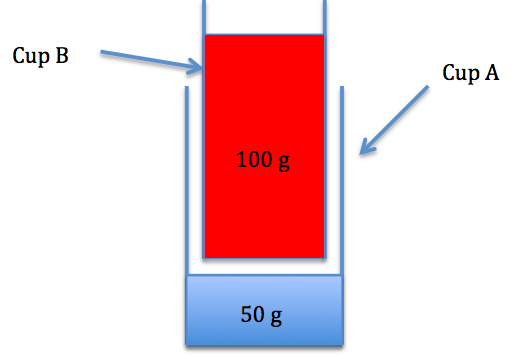 Here's what it looks like when you drop in Cup B: 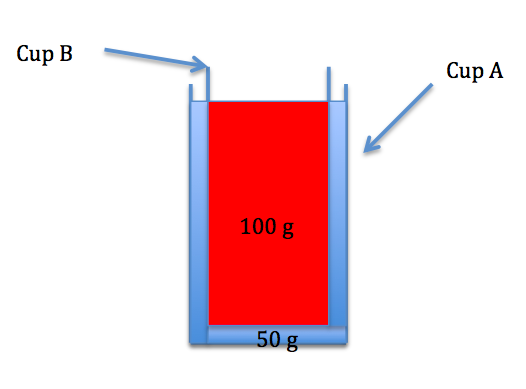 The tricky thing is: Cup B effectively displaced 100 g of water, even though there was only 50 g of water available to displace! If it's not immediately obvious how it is that Cup B is displacing 100 g of Cup A's water (even though Cup A only has 50 g of water), stare at diagram 2 for a while.

Let's assume that cup B has a mass of 1 g, so the total mass it needs to displace for it to float is 101 g. When cup B is placed in cup A, the level of the water rises. With cup B floating, we mark the level of the water in cup A. We take out cup B and notice the level of water is lower. If we now add water to cup A to bring it up to the earlier level, we would need to add 101 g of water.

Depth is what matters here.

Archimedes' Law is just a corollary which arises from this pressure gradient. Because of the way the surface integral works out around an object, a short-cut pops out from the mathematics: the buoyant force can be obtained knowing just the gravitational force which acts upon the equivalent volume of the fluid in which the object floats. This is usually stated as "the volume displaced by the object", but the displacement is an abstraction: there might not be enough fluid available such that when the buoyant object is removed, its entire volume is filled by the fluid that remains.

The "displacement visualization" of buyoancy assumes that the body of water is large enough that the availability of fluid is practically unlimited. But buyoancy does not depend on actually pushing out all the fluid out of the object's space; it's just that: a visual aid.

This is all related to the fact that the pressure in a column of fluid under gravity is irrespective of the width of that column and therefore its volume. A column of water 10m high, and as thin as a pencil, has the same pressure at the bottom as a 10m deep lake (aobut 1 atmosphere). This is why only a thin jacket of water around a paper cup is enough to create the pressure to float that cup.

How about this experiment:

Cup A is full of water to the rim. You place cup B filled with some water to float in cup A. Most of the water of cup A spills over the rim except for a tiny amount. However cup B finally floats in cup A. You pull the floating cup B out of cup A.

I guess the confusion arises from measuring water by its weight instead of its volume. The water spilled from cup A is the volume of water displaced by cup B. But you don't need to actually spill it. It's just important that the water level rises as much as if it was spilled.

And now to answer your question: You are applying the term "displace" incorrectly, because you relate it to the water that is still there. But the meaning is that it is not there, e.g. the spilled water. However spilling water is only a way to visualize that something is not there.

In short: Displacement does not mean "spilling", but raising the water level because a certain "volume is pushed aside".

BTW: The last paragraph in the marked answer is kind of critical:

The tricky thing is: Cup B effectively displaced 100 g of water, even though there was only 50 g of water available to displace!

The last verb shouldn't be "displace" but "push aside", otherwise it's the same erroneous way of thinking.

1
Weight of solid partially immersed in water
6
What is the basic reason behind buoyancy?
1
Why does oil float on water?
0
Floatation of objects
2
Why is pressure on object in fluid dependent on height of water column above it whereas the *force* on object is not?
0
Super simple doubt regarding buoyancy/upthrust