I am not a physicist or astronomer in training at all, so this might be a dumb question with an obvious answer, but as I watched something the other day on matter & anti-matter, and the discussion was kind of put out there how the matter side won out even though the prevailing thought is that at the moment of the Big Bang the universe should have had equal amounts of matter and anti-matter. It then spoke of ideas that matter must have somehow won out since we obviously exist in a world of matter. After that I had the question why would matter need to win out for our universe to exist? Since we know a matter/anti-matter collision annihilates to pure energy, and we know $E=mc^2$, why isn't it possible that all original matter and anti-matter annihilated each other leaving all pure energy, which in turn and in time could form into matter?

The key bit of your question is:

why isn't it possible all original matter and anti-matter annihilated each other leaving all pure energy, which in turn and in time could form into matter?

Leptons annihilate to photons. Hadrons (quarks, 99.97 mass-% of matter) emit about 50% of ${mc^2}$ annihilation energy as neutrinos. If the Big Bang plus cosmic inflation had exactly obeyed all current conservation laws, everything would have exactly cancelled to photons and neutrinos. Pair formation must be antisymmetric re conservation laws, offering no solution. Neutrinos and antineutrinos would have annihilated to photons, but slowly for the very small reaction cross-section. Observation suggests theory is wrong (e.g., the existence of paperweights).

Let's write apostatic theory based upon observation. A good idea need only be testable. It is believable afterward.

Vacuum trace chiral anisotropy selective to fermionic matter alters Noetherian coupling of exact vacuum isotropy to angular momentum conservation. It leaks for matter as MoND's Milgrom acceleration. Dark matter curve-fits the Tully-Fisher relation. This is why dark matter does not exist, by measurement,

Opposite shoes embed within chiral vacuum (mount a left foot) with different energies. They locally vacuum free fall along non-identical minimum action trajectories, exhibiting Equivalence Principle (EP) violation. However, chirality is an emergent property. A screw is not left-handed or right-handed for distances less than its thread pitch length. The smallest possible opposite shoes must be at least four atoms each (number of physical dimensions plus one). We need a supremely sensitive vacuum free fall trajectory test (in existing equipment - we're gonna do it, not talk fluff about it.)

Physics cannot fabricate few-atomed shoes. Chemistry can and trivially does. Crystallography's opposite shoes are visually and chemically identical, single crystal test masses in enantiomorphic space groups: ${P3_121}$ versus ${P3_221}$ alpha-quartz or ${P3_1}$ versus ${P3_2}$ gamma-glycine. Academia can perform geometric Eötvös experiments at will, 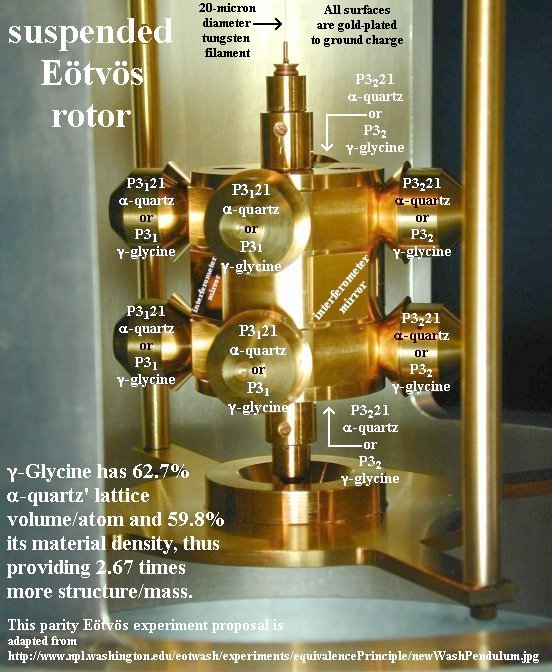 40 grams net of alpha-quartz as two sets of four single crystal test masses compare ${6.68×10^{22}}$ pairs of opposite shoes (pairs of 9-atom enantiomorphic unit cells, the test mass array cube's opposite vertical sides, also covering up to four compactified dimensions if present). If there is no net signal output, we need different theory. If there is a net signal output, we can write better theory.

Not the answer you're looking for? Browse other questions tagged big-bang antimatter matter or ask your own question.

8
How come the universe is made of matter and not antimatter?
0
Can matter be formed from nothing?
0
If the observable universe is only part of the universe, how do we know there is more matter than anti-matter?