I'm not a biologist, nor physicist, but there is one thing I try to understand about the elecricity inside human body. I wasn't sure whether place this question here, or perhaps on biology portal, but I consider physics to be more descriptive of the processes occuring in nature (than e.g. biology).

I always was taught about electricity to be an ordered motion of electrons - and that they are transferred from one atom to another one when electricity "happens" (which means that one atom looses its electron, but acquires a new one from the other atom instead). But after reading some science-popularizating articles on the net on human body, I found out that they mention about whole ions being moved in the human nervous system in order to transfer an electric impulse ("message" inside nervous system).

The key to electricity is that it is moving charge. In our electrical wires we use electrons, which carry charge, to send signals. The current is the net flow of charge through a wire (or whatever is carrying the current) which then depends on the speed. The speeds at which electrons move involve a few distinctions. Firstly, the electrons move randomly due to energy from temperature (thermal energy). This speed is quite high, but does not involve any movement of current, since for each electron moving one way there will be another moving the opposite. Especially so when we have $10^{23}$ electrons in our wire.

When we apply a voltage across the wire, the electrons "drift" along at a very slow speed, giving us a current. Usually the speed is in the millimetres per second range, which is quite slow. But the effect of the current travels much faster, because the electrons exert an electrical force on their neighbours, which travels along the wire very quickly. This is why when you plug in your phone you don't need to wait for electrons to flow along the cable before it starts charging.

Now in the body, the electrical signals are carried by ions. An ion is an atom that is missing electrons, so it carries a net charge. This means we can use it to create a current. Since atoms are much much heavier than electrons, they will travel even slower (in the same applied voltage).

The nerves involve the movement of positive sodium ions and negative chlorine ions. When the ions are released into the ion channels, they move along and change the potential energy (voltage) which is the signal they are sending. This signals can move along between 1 m/s and 100 m/s (a brisk walking pace to faster than a race car), depending on the type of nerve.

So fundamentally, there is no difference between using electrons and ions for electricity, in terms of physics principles. What does differ is the way they interact with the medium they flow through. Electrons are good for wires since the conduction electrons aren't bound to their individual atoms so they are free to move. Ions are good for the body as electrons wouldn't be contained properly, and we can get sodium and chlorine fairly easily into the body.

They aren't really electric impulses, just signals. Take look at the Wikipedia page, with a picture that shows the propagation of the impulse. Action potentials are not currents themselves, nor ions moving from the head of the neuron to the tail. The signal is local change of membrane potential, which moves like wave. The electricity, in the form of ions, flows between the outside of the cell and the inside through ion channels, essentially perpendicular to the action potential. The flow of ions eventually brings the local voltage potential to a certain threshold. This causes changes in the surrounding molecules, opening more ion channels and spreading the signal forward. 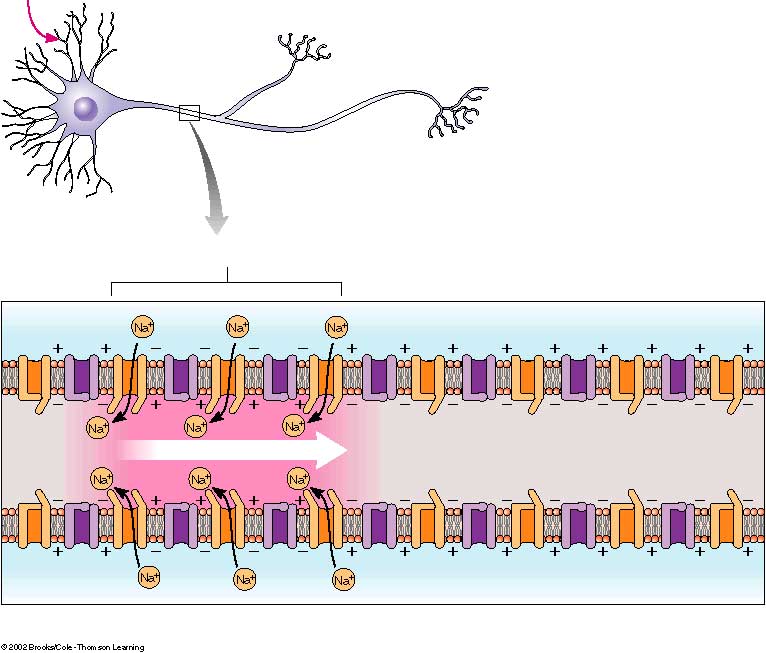 When you think about a neuron, you have to keep in mind that it is not a piece of wire where you can apply a voltage to the ends to get a current. It's more like a rope where you can wave one end to transmit a signal to the other end. It's just that the wave happens to be made out of voltage.

Very interesting theme, but it's really a bio question. :)

It depends on what exactly you mean by electricity. When you're thinking about electricity moving this could be an electric current, or it could be an electric field. The obvious example of the first is current flowing in a wire, and the obvious example of the second is a radio wave travelling (at the speed of light) between the transmitter and your radio. The wave a nerve cell works is more like the second than the first.

By contrast a propagating electric field, like a radio wave, does not carry any charge but instead it transports energy as an oscillating electric/magnetic field. I'm not sure it would be wise to try and explain in detail here as it would be long explanation.

Not the answer you're looking for? Browse other questions tagged electricity biophysics or ask your own question.

1
Electrical Resistance and chemistry
1
How electrons act under rotating magnetic field?
10
Why is there no current flow when I connect two opposite terminals of two separate batteries?
1
Help me understand static electricity
0
Are muscle cells electric dipoles?
2
Galvanic Cells and Electric Potential
0
Could A Stray Radioactive Particle Collide With an Atom in a Human, Causing a Cascade?
2
How nerve signals preserve quantum coherence?
0
Why are non-metallic elements with partially filled valence bands not conductors?