Why does Matter occupies space? Matter and space are two things... If Space does not has mass, why should matter have space-ful nature?

This thought has completely changed my perspective towards matter. If the matter in a star can collapse to a point to form a Black hole, surely the true nature of matter should be able explain this behavior. I find this collapse easy to imagine if I visualize Matter as something which lies in space, but which itself is not space, or space-like... It does not occupies space... What I mean is this... Why should matter occupy space? Space-fulness is the nature of space, why associate it with matter?

I use this modified picture of matter to explain the collapse of a star to a point. Suppose matter in a star has 0 volume, and it is the space in between matter that does the job of occupying the volume, then we can easily eliminate this space to explain a point sized infinitely dense black hole...!

A particle of matter with no volume is hardly like a particle I had imagined earlier. It is more surprising...

I think that matter lies in space, but does not occupies it.

Is the general association of space-fulness with matter a misunderstanding? Is it correct to view our matter as a space-less entity? Or matter is actually woven to the fiber with space, such that it itself behaves a bit like space, by occupying it?

Does Matter REALLY occupies space? Am I am under a misconception?

Yes, it's a misconception, or not - or both.

What do you call "matter"? Let's call matter particles with a rest mass. So, everything that's made up of elementary particles is matter. Now here's the catch: To the best of our knowledge, elementary particles are pointlike, i.e. they really don't have any extend in space, they don't really "occupy" any space.

Nevertheless, what we see is that objects do tend to occupy space in that no other particle can be there - now how's that? If we look at the stable particles (protons and electrons essentially), we even see that protons do occupy space. I can think of two reasons, the first being the Pauli exclusion principle. Since protons and electrons are fermions, they cannot be in the same quantum state, hence there is a good chance that they cannot be at the same place. So, losley speaking, if a proton is at one place, this makes it unlikely for any other proton to be there (impossible, if all other quantum numbers equal). Especially in bound states, this is THE reason, why electrons pile up instead of all being close to the atom's centre, thus making an atom appear "large". The second reason is charges (electric, etc.): equal charge will put more pressure towards protons not being in the same place. "Charge" is also the concept used to define something like the proton radius (which doesn't mean that a proton actually occupies this amount of space). So having two objects with the same (electric) charge, if you bring them near to each other, they will repell - hence it seems that they occupy a certain amount of space, where the other particle can't go.

So, all in all, elementary particles don't occupy space, other particles (and hence most part of the "mass", since this is binding energy) do, because their charges and the Pauli exclusion principle (since baryons and leptons are both fermions) make sure that it will be less likely to find other particles near them.

However, all this can be overcome by enough force/energy - as is seen by the existence of black holes.

Imagine this sheet of paper is the known universe: 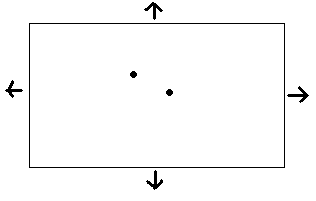 The paper is the known universe. The two dots on the sheet are atoms or particles. The empty space on the paper is space/time. Space/time is continuously expanding from every point on the paper (indicated by the arrows), except for those points where a particle or atom exists.

If you zoomed out on this image (symbolizing the expansion of space/time) however kept expanding the size of the sheet of paper (or not depending if you think the universe is expanding or not, I think it is) the two dots would appear to move closer and closer together. There would still be an amount of space between them, however relative to the rest of the universe they would have moved closer together.

Now, we can also tell that the two dots are slightly towards the top edge of the universe, so their motion within the universe will leave them slowly traveling in that direction. If we added a third dot near the top border of the paper, the amount of expanding space/time between this dot and the edge would be smaller than the amount of expanding space/time in the center of the page. This dot would appear to be moving much more rapidly, and would also seem to be moving under a repulsive force of gravity rather than an attractive force.

Does any of this make sense to anybody else? I believe what Raja is saying is absolutely 100% correct and true.

I tried explaining this almost 10 years ago to a scientist from Jet Propulsion Laboratory at NASA and he told me I was wrong and that I simply did not understand physics. But I think he only believed what he was taught in school. I am almost certain what Raja is saying is correct.

Not the answer you're looking for? Browse other questions tagged quantum-mechanics particle-physics black-holes space matter or ask your own question.

8
Universe Expansion
1
The universe is expanding but why the galaxies have no motion?

64
From where (in space-time) does Hawking radiation originate?
2
Would a particle the size of a neutron, if it had enough mass, collapse into a blackhole?
0
Working of black holes
0
Does all matter of a Black Hole finally fall into its center singular point and why?