Meaning/picture of the statement: "Turbulent flow is chaotic. However, not all chaotic flows are turbulent"

Turbulent flow is chaotic. However, not all chaotic flows are turbulent.

Someone give a picture for that?

It's largely a matter of definition. Here are some quotes.

Definition There is no universally recognized definition of chaotic flows. Flows with properties that are neither constant in time nor presenting any regular periodicity are normally referred as chaotic. Fluid turbulence is generally found to be chaotic. It is also random, dissipative, and multiple scaled in time and space. It is a complex system of infinite degrees of freedom.

A paper full of state diagrams (but rather heavy on the math) for transitions to chaotic flow: https://tspace.library.utoronto.ca/bitstream/1807/25484/1/Transition%20to%20chaos%20in%20converging-diverging%20channel%20flows.pdf

And finally, a nice discussion at quora.com (registration apparently required)

As Piyush Grover pointed out, a chaotic flow has to have mixing by definition. The following answer assumes 'chaotic' to mean 'random' which is technically incorrect. But I've decided to leave it here anyway, because I think that's what the OP meant. However, I still think that you won't observe a k^(-5/3) spectrum in the case of chaotic advection.

I'm also adding Piyush's comment as a part of this answer.

Chaotic but non-turbulent flows can have exponential mixing. There is a whole field of chaotic advection based on this fact. In fact, you can have exponential mixing of mass in Stokes flow, which is as far away from turbulence as possible. This is often used to mix fluid efficiently at micro devices (low Re), where turbulence is simply not feasible due to energy considerations.

A chaotic flow is one in which there seems to be a high irregularity in the behavior of one/all flow variables with time/space. While a turbulent flow certainly exhibits this behavior, there are also other properties that should be present for a flow to be called turbulent, one of which is high levels of mixing, i.e., mass/momentum/heat transfer.

This is a distinct (and perhaps the most useful) property of turbulent flows which is frequently exploited. When you try to mix the sugar in a cup of coffee by stirring it, you're essentially making use of this property. This effect can be clearly seen by looking at the velocity profiles of laminar and turbulent flows through a pipe. 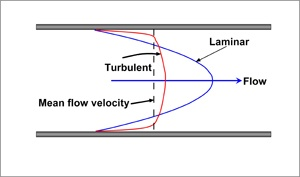 (Taken from Page on Flowcontrolnetwork)

A good example of a flow which is chaotic but is not turbulent is the trail behind an aircraft. Though the flow inside the jet trail is highly chaotic, it is not turbulent because it maintains the shape (diameter) for very large distances behind the aircraft, which means that there is very low/negligible mixing with the surrounding atmosphere.