I have looked at this, but it did not help with locations. Really this just comes down to mathematical manipulation, which for some reason I fail to see. Here is my paraphrased setup:

Consider two sources of light separated by some distance $a$, and suppose they are emitting uniformly in all directions, at the same angular frequency, and same wave number. Determine the locations on a plane, which is parallel to the line joining the two light sources, at which the intensity is a minimum.

If things are correct up to this point, then it is clear that the minimum intensity locations occur when this cosine is a minimum. Namely, when

However, I cannot seem to put this into a nice simplified form for z as a function of y. I suspect that it is a hyperbolic relationship, but is there a nice way to reduce this to a compact form? 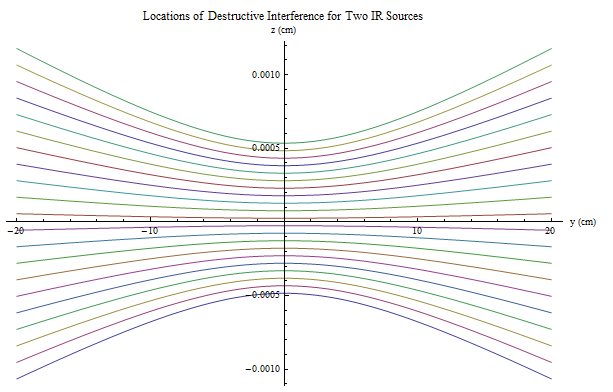 Not the answer you're looking for? Browse other questions tagged homework-and-exercises optics electromagnetic-radiation interference or ask your own question.

2
How to calculate the intensity of the interference of two waves in a given point?

1
Light interference maximum and minimum intensity points
3
Homework question about electric field between two spheres
5
Why can interference from two independent sources be observed?
1
How do I choose the right value of $r$ to find where the electric field is zero?
1
Two-source interference in the perpendicular direction and small-angle approximations
0
Generalized Formula for Interference Maxima & Minima of Circular Waves