In an octo-copter design, is it better to put four pairs of counter-rotating props over each other so that each pair works in a column together? Or will you get more power or efficiency from staggering all eight props?

It seems it would be more convenient to position them in pairs with a CW and CCW prop on the same axis, but I am wondering if this reduces the efficiency of the thrust to have them producing a single column of forced air rather than two separate columns.

What are the physics involved?

It is better to stagger them. You want the largest overall effective propeller area for efficiency. This is the same reason that airplanes with wide wingspan are more efficient. Note that sailplanes, where efficiency really matters, have wide and thing wings.

The reason is that lift comes from momentum, which is mass times velocity of the air that is pushed down. However, the power it takes to move this air is proportional to the square of velocity. Therefore you want to push a lot of air a little, instead of a little air a lot. Both produce the same lift, but the former takes less power.

Rotors spread out will push more air, which therefore doesn't need to be pushed as fast, which saves power.

There is one minor advantage to stacking counter-rotating propellors, which is that you can cancel the spin introduced into the air, which is just wasted motion. The Soviet Bear bomber is a good example of this. However, the spin induced in the air from a single propellor represents a relatively minor amount of power. The usual reason for stacked counter-rotating props in aircraft is for compactness and being able to increase the power imparted to the air over the limited area. That was the real reason for the configuration of the Bear. They simply needed more power to push a heavy aircraft at the speed they wanted, and more propellors sideways would have been difficult for other reasons. The Bear is a interesting lesson in what you can do with pushing propellors to the limit because you suck at jet engines.

I recently came across this information which seems quite relevant here:

When you are comparing equal disk area, then yes staggering them is better than coaxial (in the same column) by roughly 20-30%.

But consider the configuration shown below. For a given fram size, when you stagger them you have less room around the circumference of the vehicle's frame and so you therefore have to use smaller propellers in order for them to fit, but if you fit them in a co-axial configuration you can use larger props (with slower rpm) and get better overall coverage. Efficiency is therefore quite a bit better when you consider these additional factors.

Keep in mind though, that the coaxial configuration using larger prop diameters will need motors to be of a lower kV rating than the staggered configuration

Image came from here, which discusses this effect. 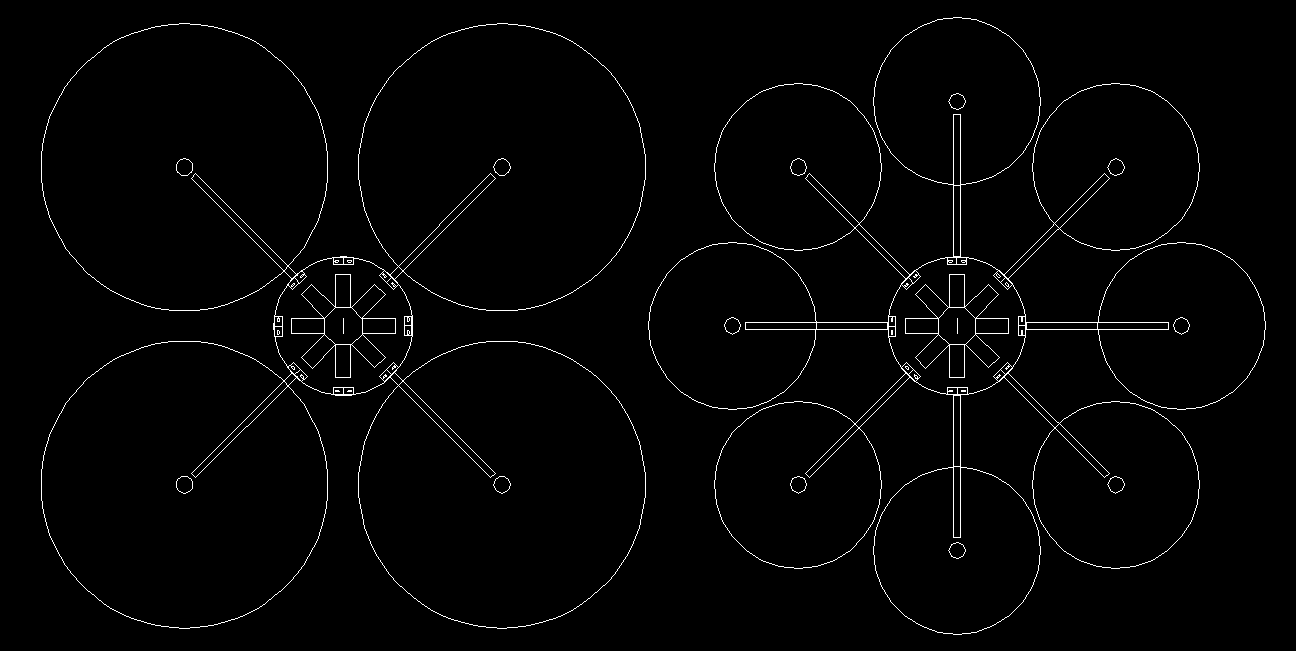 Not the answer you're looking for? Browse other questions tagged aerodynamics power lift or ask your own question.

12
Why do co-rotating vortices coalesce, but not counter-rotating ones?