EMF in an Open circuit?

What will happen to the induced $EMF$ while the conductor passes the magnetic field? And how fast would it dissipate? 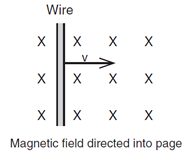 The electrons experience a Force $evB$ and want to go to down part of conductor. Hence, an electric field sets up when they go there. Its magnitude is equal to $evB$ such that electrons experience no net force. You can find potential difference by $E.l$ where $l$ is its length.

A potential difference is set up and current will flow if you attach a resistor across it.

An emf will never be created because it is an open circuit. So there will be no time for it to dissipate.

First, we are talking physics so we have to be accurate. An EMF will only be induced in a wire if it passes through a changing magnetic field.

It is often helpful to relate physical phenomena with what you can directly see. In this case, we can use a mechanical analogy to explain what happens.

The mechanical analogue of EMF is force and the mechanical analogue of current is motion or velocity. When you push on an object two things could happen--It could move or you would just be exerting force on it. The same thing happens in this case: if an EMF is generated and there is enough conductivity in the circuit a measurable current will flow. Compare this with pushing an object such as a cart, which has wheels that makes it easy to resist the friction on ground and respond to the force applied.

Even if the conductivity is low(an open circuit is in fact completed by air surrounding the wire), a current will flow, but it will not be significant. This is similar to pushing a wall; it won't move significantly.

Isn't I=0 and EMF not being induced the same? EMF means electromotive force. Since the movement of electrons(current) is 0 in an open circuit, there is 0 EMF between them. An alternative solution would be V=RI, R is constant, so V∝I. when I=0, V=0.

If the circuit is closed, magnitude of emf is proportional to the rate of change of magnetic flux.

Potential is created in the conductor only for as long as the moment the field is passing.. Current would exist only if the potential were given path through the conductor.
Potential is a stagnant magnetic force which of course disappears if not made current.

1
Is internal resistance relevant in motional EMF?
0
Induced EMF, additive to conductor's closed circuit?
3
Eddy currents on a conductors surface, and induced current flow around the loop both coexist?
1
Induced EMF dependent on terminal wire connection?
0
Moving the magnetic field around a fixed conductor?
7
What force causes the induced EMF of a loop? And, the difference between a loop EMF to motional EMF?
0
Relativity, and Lenz's law with respect to the Lorentz force acting on a wire?
2
Confusion about induced emf vs motional emf