How could a solar sail be powered 'Upwind' by craft's own (laser) light source?

I've just watched a Discovery Science program - Alien Encounters featuring SETI luminaries such as Jill Tarter, Frank Drake and Nick Sagan. A serious discussion on how to interpret ET messages coupled with a dramatised depiction of the social impact on Earth of an impending visit from ETs. My major point of confusion is that, within our solar system, the visitors head in a sunward direction to Earth powering a craft with a solar sail, powered from behind using very powerful lasers.

I have viewed some topics on Phys.SE on the powering of solar sails, and including 'how massless photons can have momentum'. My problem with the described system is;

1) This sounds like 'pulling yourself up by your bootstraps' - If the photons hitting the sail have sufficient momentum to push the sail along, would there not be an equal and opposite momentum of the photons leaving the laser - and thus cancelling out the thrust?

2) If the solar sail craft is heading sunwards, you are already fighting a 'reverse thrust' from the sun. The program postulated tapping energy sources such as dark energy to power the lasers (OK that's sci-fi at the moment, I admit). So if problem 1. above is wrong, the power source for the lasers would have to be immense as it would to exert more than double the sun's photonics pressure to move forward.

I thought the only sunward movement of a solar sail was possible only by an analog of land-sailing's 'tacking'. I know the TV program was speculative, but I hope this is not received as science fiction, as solar powered space probes are a reality.

To clarify, as I'm getting tangential responses to this. Is the issue I called problem 1. a complete bust? That is, powering a solar sail from behind with your own (laser) light source a non-starter, because of the 'bootstrap' scenario or another more scientific principle?

Attempting to load a screenshot of the craft as requested- 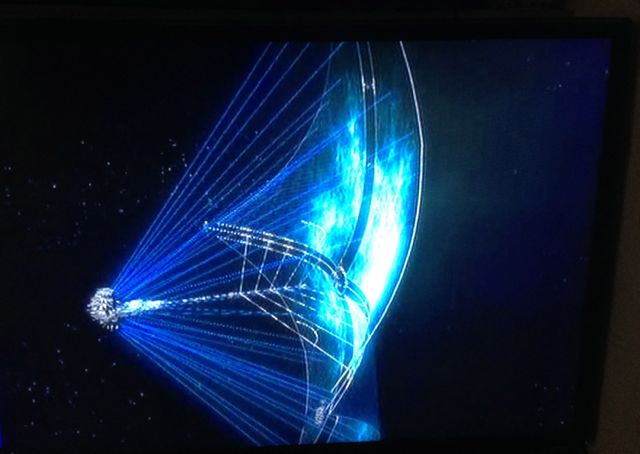 The most likely explanation in my opinion is that the programme makers have misunderstood a similar proposal, that might practically work, that is different in one specific, but very important, detail.

Imagine that the high powered laser was actually mounted somewhere in the alien home solar system (or somewhere similar) instead of being attached to the ship. The ship could then be accelerated away from the star system without needing to carry a big enough power source to do all the work itself. The fact that this acceleration happened to be towards our sun would be a coincidence.

There are complications around stopping again, though a well-timed gravity slingshot to reverse direction, followed by using the sail again to slow down, would in theory work, though you might have problems decelerating enough to match orbits with your desired target.

There is quite a lot more detail of this mechanism on the Space Exploration Stack Exchange site.

A solar sail could be a reflector - and as such you can sail in a bootstrapped direction (because the photons end up traveling in the opposite direction from the one you want to travel in). It would be very inefficient - because the solar radiation meanwhile is pushing back on your sail, and provides "drag". Turning the laser the other way and keeping your profile small would be somewhat better.

Now if you used the back of the solar sail as a means of capturing the sun's energy, could you then use that energy to power something? I realize that's not your question but it is an interesting one. The relationship between momentum and energy of a photon is given by $$E = pc$$

Looking at this equation, you see immediately that there is no way of taking the energy and repackaging it (either into photons of higher or lower energy) to increase the momentum for a given energy. However, if we look at massive particles (for example, Xenon atoms) the story changes.

At non-relativistic velocities, the momentum of a massive particle is a function of the kinetic energy according to

This means that the momentum I get for the same energy goes up with the mass $m$ - a giant solar panel capturing energy from the sunlight could be used to generate the energy for an ion thruster.

Not the answer you're looking for? Browse other questions tagged rocket-science solar-wind or ask your own question.