How to calculate loss due to Gaussian beam divergence of a laser going through multiple lenses?

To better explain my question, I will need to give a brief description of the configuration used in 2D MEMS switches.

So, the next figure shows a configuration of a 2D MEMS switch, a light beam arrives from a fiber to the input port, travels inside the switch until it meets a mirror that is in the standing state to reflect the beam to the output port. 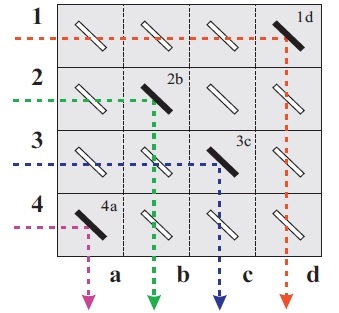 The output beam from the fiber is wide, therefore, they collimate it using a collimator at the input. This collimator is picked such that the beam waist is minimum at the mirror of the worst case scenario (i.e., longest path).

This path is shown in the next figure. 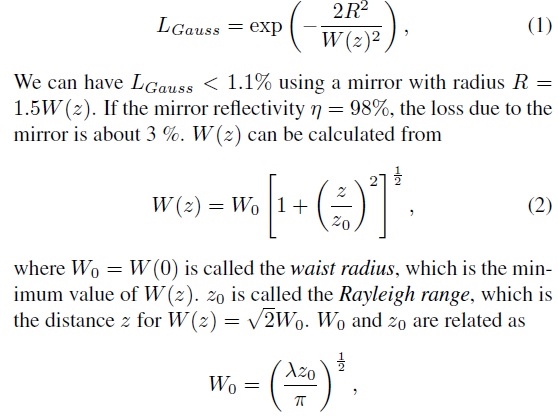 Note that the beam propagates in the free space from the input port to the mirror and from the mirror to the output port. This is because mirrors other than the mirror 1d are in the sleeping state (i.e., they are out of the beam's path)

What would be the impact of these elements from 1a to 1c on the loss due to the Gaussian beam divergence? Would it be the summation of the losses using the provided equation by at different distances, in other words

If not, then why? and how can I calculate it?

Wow, this is a very detailed question. Thanks for your effort.

Lets ignore diffraction effects, which will scatter some small amount of extra power out of the laser beam. The loss at elements 1a to 1d will not simply sum up. This is because the power will only be lost at one of the mirrors, and will not be there to be lost at the other mirrors. So, to calculate the power lost by clipping in the whole path, you simply need to calculate the power lost at the mirror/glass where the beam is the largest relative to the mirror/glass. A more accurate calculation of the loss which includes diffraction effects would probably require a computer simulation.

There is another source of loss in the system though. If you use a bare (no optical coating) piece of glass at elements 1a - 1c, then you will lose about 3.5% per interface. With 6 interfaces (front and back of elements 1a - 1c) you will transmit $$ T=(1-0.035)^6=0.81\qquad\Rightarrow\qquad L=19 \%. $$ So you will lose almost 20% of the light to reflectance at the glass interfaces. If you pay for an anti-reflective optical coating you can get reflectivities as a low as 0.1% pretty cheaply in which case you will lose almost nothing to this source of loss.

Not the answer you're looking for? Browse other questions tagged optics electromagnetic-radiation waves laser fiber-optics or ask your own question.

4
How does a 2D MEMS based optical cross-connect control its mirrors?
8
Wavefront RMS errors, mirror surface roughness and Gaussian beam scattering
1
Phase shift in back-reflection generated at the mating point of two fibers
0
How can an axicon plus a convex lens produce an optical vortex?
15
What optical resonator configuration produces the most output power for a laser?
4
Measuring higher laser output behind single mode optical fiber than in front of it
0
What do you mean by transverse dimension?
11
How do non-mechanical solid-state optical switches work?