I've read that the angle for viewing a Primary Rainbow is between 40-42 degrees. How would I go about showing this? How would I calculate that angle from scratch? I figured that Snell's Law and the Law of Reflection would be used for light bouncing off and through a (spherical) water droplet. But I only have a vague idea of how to begin.

I would imagine that once you know how to calculate the Primary Rainbow angle, calculating the Secondary Rainbow angle would be very similar if not identical process. Is this right?

Actually this is a bit of a tricky problem that only was solved relatively recently. The primary rainbow is generated by a beam that refracts once inside the drop, reflects off the back, then refracts again upon exit. 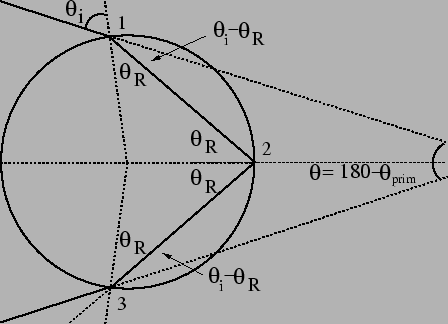 You have to use snell's law and then some calculus to find the minimum scattering angle for the angle that produces the brightest light as illustrated below from ray tracing: 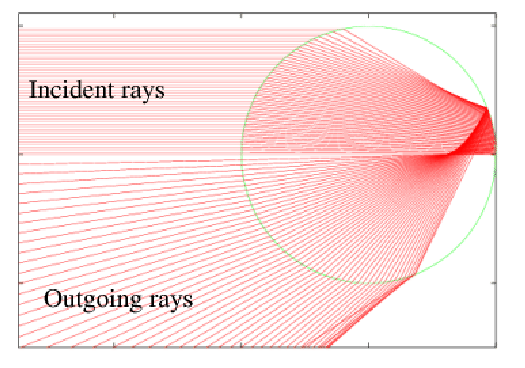 For a fully worked example try here. And this site has some nice charts of the primary and secondary bows.

it's easy. send the ray into a spherical water drop. it goes in, reflects once, and goes out. get the expression for the angle between incoming and outgoing rays as function $\alpha(x)$ of the distance from the center of the drop to the incoming ray; let's call it $x$.

next, assume uniform density of light along the $x$. the rainbow angle is at the extremum of $\alpha(x)$. basically, when you change $x$ the angle $\alpha$ changes, but at some point it stops changing for awhile, then starts changing again. that's the point of highest intensity of outgoing light, i.e. rainbow angle

the secondary rainbow is the same thing, but you have two reflections before getting out.

UPDATE. i'll add one more detail: rainbow happens not only after the rain. there's rainbow effect in nuclear scattering. it's quite fascinating.

4
Shape of the rainbow